Jerry Springer The Opera is based on the TV show with the same name. It is offensive, off-beat and energetic. It does properly push the boundaries until you are wondering how they get away with it! You can see why in 2005 major controversy arose due to its television broadcast. This production is a revival by Northern Ricochet Productions.

The first act is entertaining and has some good tunes by Richard Thomas. It is like the Jeremy Kyle show but all sung through, full of interesting characters and funny storylines. This show gets progressively more offensive and rude. In my opinion it is far worse than The Book of Mormon. Especially when you get to the unneeded act two which all feels like filler to add more time. We go into hell for some reason so that there is actually an Act Two! It started to get repetitive, the songs started to get forgetful and there was partial nudity which wasn’t really needed. 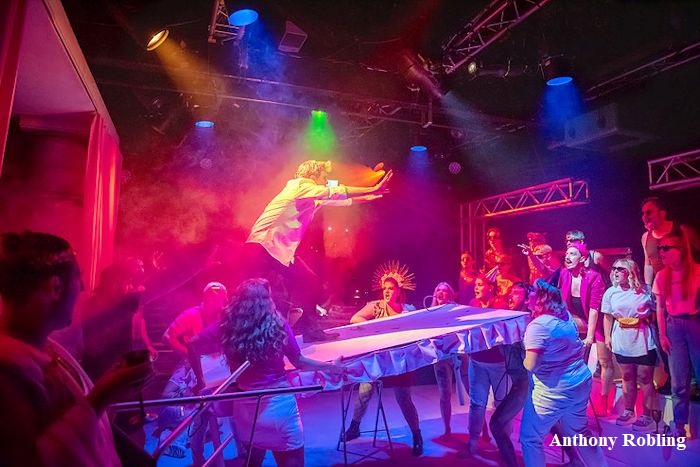 Act Two however does comment on the impacts of these types of television shows which I though was important.

But I have to credit the cast who are really great. Vocally they sounded excellent, you could hear every single lyric. The score is quite operatic at times especially in Act One which does provide a lot of the comedy.  Set and costume designer Victoria Hinton-Albrieux has split the theatre into two with the performance space in the middle. This was a really great choice because it gave the “Live TV” quality so you could see other audience member’s reactions which was funnier than what was going onstage. I enjoyed the set in act two, taking us to a Vegas Style hotel for hell, the set in act two was the best thing about it. The jokes slowly started to get tired over the two hour run time (Excluding Interval)

Michael Howe really owned the part of Jerry Springer and gave a really great performance. He is actually the only one who will speak because it is entirely sung through. There is a principle cast of 13 (who play a number of different characters) and a choir of 12 who are the abusive audience, they really do shine in the large vocal sections.

The six piece band were excellent and the sound design was good but at times the vocals were a bit too ear piercing. There was some really nice touches of lighting by Aaron J.Dootson. Direction was by James Baker, and I enjoyed the use of torches at the start and end of the piece and the use of balloons was very clever. He kept the pace going until act two where things started to slow down unfortunately.

Jerry Springer The Opera is very care-free and fans of the TV show will enjoy themselves, but it is not for the faint hearted at all.  Running at the Hope Mill Theatre until 31st August https://hopemilltheatre.co.uk/events/jerry-springer-the-opera/