Given the chaos that currently engulfs our daily political life, it is interesting that the Royal Exchange have chosen to open their new season with Macbeth, dissecting the mind of an ambitious leader as they gain, wield and finally lose power. Add Lucy Ellinson playing the eponymous role as a Queen warrior in an overtly modern setting, and we have the potential to explore this classic text from a very different angle, an opportunity that is unfortunately only partially realised.

Director Christoper Haydon has made some bold decisions with both the text and staging; weighing in at three hours including interval and even with a truncated battle scene at the end, this is comfortably the longest version I have ever seen. The three 'weird sisters' open proceedings in a familiar way, but then Haydon seems anxious to exploit their potential comedic value throughout, often where none exists. They are effective when used as witnesses to the ongoing mayhem and carnage in the court of Macbeth, hinting at their malign influence on the mind of Macbeth, but elsewhere their presence often distracts and slows exposition.

Where the running time is well used is when focussing on the political dimensions of the play, bringing both the characters of Malcolm (David Hartley) and Macduff (Paul Hickey) to the fore. This 'political' Macbeth gives huge modern resonance to some of the exchanges between the rebellious Malcolm and Macduff, the lines 'our country, it weeps, it bleeds and each day a fresh cut is added to her wounds', felt like an update from Brexit Britain rather than 10th century Scotland. 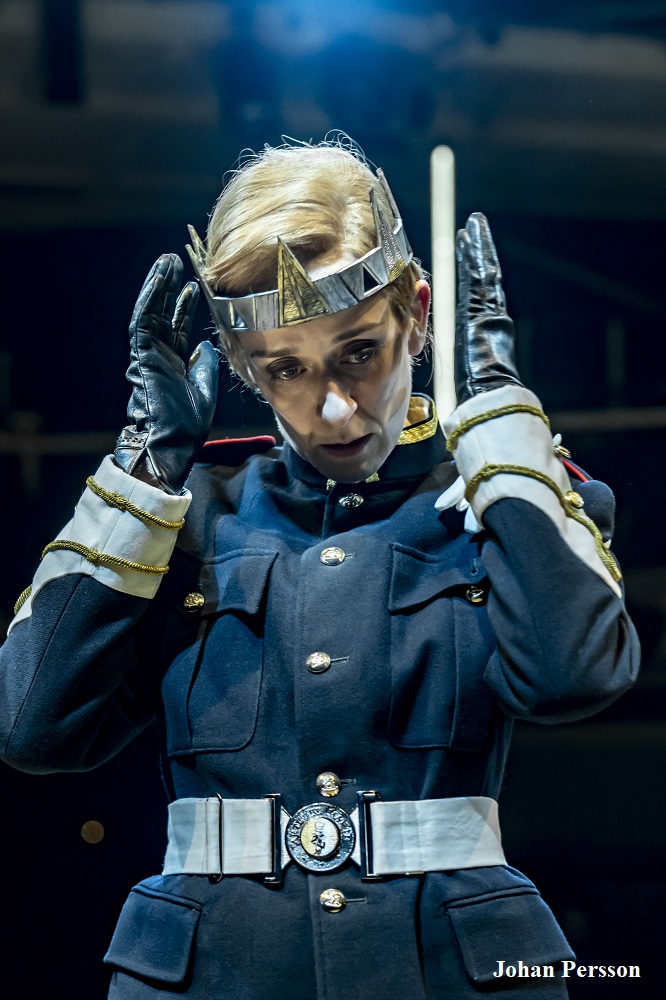 Both Hartley and Hickey excel as warrior statesmen driven to rebellion by the increasing madness of an unhinged leader, with Hickey particularly affecting on receiving the news of his murdered family ("What, all my pretty chickens?"). This earlier scene was truly shocking with the infanticide being starkly callous and graphic as Lady Macduff (Rachel Denning) watched in helpless. Denning was a further highlight in the role of Porter, the guardian of the gates of Hell. Writer Chris Thorpe neatly slotted in a modern speech for her to castigate everyone from Mancunian property speculators to social media commentators, there was even room for fallen Mancunian idol Morrissey in there!

Unfortunately, all the excellent 'state of the nation' exposition comes at the expense of the exploration of the central relationship between the couple at the heart of the play, which is ultimately what a production of Macbeth can be judged upon. The decision to make Macbeth an overtly female role, rather than just cast a female in a male character (as with Maxine Peake in the 2014 Hamlet on this stage), should shed new light on both her motivation and that of her partner in crime. Are we more disgusted by a female murderous Macbeth than by her male counterpart? Does the sexual chemistry and dynamic change between the main protagonists when we subvert the gender norms? These are both excellent notions that are potentially available with this casting but are never fully addressed.

There was simply the lack of a chemistry between Ellinson and Ony Uhiara as Lady Macbeth that would drive them to murder. Often the sheer power of the lines were lost in delivery or thrown away with ill-timed comedy, as when Uhiara has her 'screw your courage' line interrupted by a witch/servant bearing a cake across stage for no discernible reason. Despite its lengthy running time, I never got to know the central characters or felt any sense of Lady Macbeth driving her partner towards gruesome regicide. I was left to surmise that Haydon's production sees Macbeth as driven by her own inner demons as portrayed by the ubiquitous witches. Ellinson was much stronger playing the martial Macbeth in the latter stages with her beautiful quizzical confusion and doleful eyes juxtaposed against her brutal actions. But the overall effect was androgyny rather than any specific female perspective on the character, which Ellinson should have been given licence to explore given the time available.

Designer Oli Townsend created a series of memorable tableau for the round space of the exchange stage. A gaping hole in centre stage both represented the entrance to Hell and the cauldron of the witches and provided a strong focus. Similarly, Banquo’s ghost at the feast will stay in the memory both for his inventive costumed arrival and the 'rave musical chairs' scene that preceded it. But most striking was the final end of Macbeth, all the more chilling and brutal as she is slung onto the stage and strung up like a carcass in a butcher shop.

Overall, an uneven production with the merits of design and individual performance being outweighed by the decision to concentrate on style at the expense of text and character.

Verdict: Uneven lies the head that wears the crown.