I could simply finish there, but, Scottee has got so much to say, it certainly would not do him justice.

Scottee was brought up in Kentish Town, comes from a working-class background and had no formal education. His upbringing was hard, and he saw things no youngster should have to see or experience. It is clear, that this has left its mark!

There is a strong political message coming across from the show, which attempts to draw attention to the huge gap in opportunities between the working and middle classes. Why do the Conservatives not recognise the yawning chasm between the 14.3 million people in the UK who live in poverty and those outside of poverty? The figures produced for 2017/18 by the Social Metrics Commission (SMC) showed that 4.6 million of these people are children, 8.3 million are working-age adults and 1.3 million are pensioners.   22% of our society are in poverty and 34% of these are children. 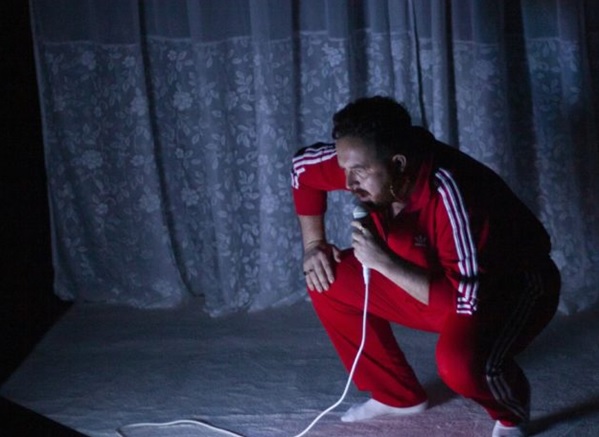 It is no wonder Scottee is angry!

His own experiences have driven him to speak in this way and he does not soften the blow!

He has a captive audience.   The average theatre audience in the UK will be largely made up of middle-class attendees. The arts are dominated by middle classes leaving little opportunity for those without education or financial backing.

The show begins on a more light-hearted note, only giving a taster of what is to come. There is a dig at Art Council funding still not reaching the working classes and as the show evolves from the initial light-heartedness into a heartfelt message, the audience noticeably quietens. The middle classes are listening! How could you not?

The message is delivered partly in a comedic way which is needed as the evening could feel very much like we (the audience) are being preached to, rather than listening to an important message. To not feel a tinge of empathy or sadness during the latter stages of the show would be nigh on impossible, unless you don’t have feelings for the plight of others.   In sharing his own sadness and the shame he felt at being poor, Scottee shines the spotlight on not only his own past, but the fact that this is still happening to others. The figures quoted above are recent, and apart from the pensioner’s figures which have improved, the other members of society are sliding further into poverty.

This production is hugely important in communicating, what is a problem on a vast scale. He was brave enough, to share his inner most thoughts about his own experiences in poverty, to try to create change.

Using the arts for this purpose is not new and politics and the arts will continue to walk hand in hand!