Out of Order - HOME

The show – held in Home's Theatre 1 - opens with six dishevelled clowns trudging tragically onto the stage, wigless and complete with matching faded tartan suits and dripping face paint. The large black performance space is sparsely populated with a fold away table and institutional chairs. Like watching the dancers in the wings of a Degas painting, there is a feel we are seeing what's behind the scenes. 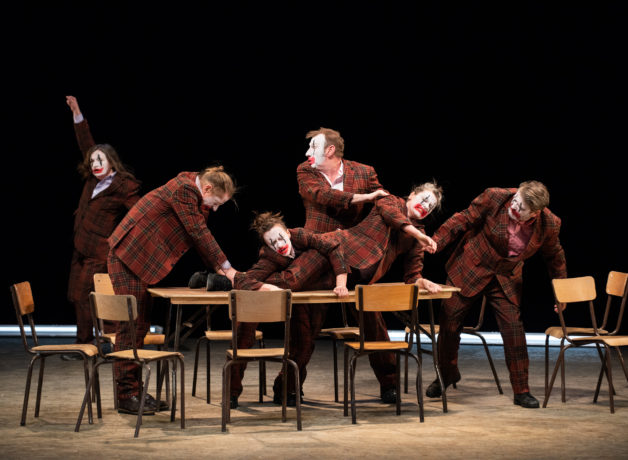 The performance proper begins with the clowns sat in earnest conference around the table; suddenly chaos erupts to the sound of Val Martinez's "Someone's Gonna Cry" and chairs scatter as a fight breaks out. The clowns spring to their feet, chasing each other in feverish aggression. The conflict eventually dies down and the group re-convene around the table, only for the music and anarchy to restart seconds later. Thus the expected cycle is established and the skilled performers proceed to toy with the audience to hilarious effect by varying their route to the inevitable chaos and their actions when it arrives. We see scenes reminiscent of bar room brawls and school yard games, the visual poetry inviting you to speculate on the subtexts and with everything entirely incongruous with the conventions of clowning.

The clowns then segue from one such set piece to another; each time - as in a great piece of classical music - establishing an expected sequence, then weaving magic via the variations introduced. We are treated to a hilarious balloon sequence; an exhausted furniture march and a fraught segment of horn blowing antagonism. Each movement is played out with impeccable comic timing and precise facial and physical acting. The absence of dialogue creates a hyper-focus in the audience allowing the players to use the slightest sound or movement in their craft - the entranced audience at times seemingly nervous to clear their throats!

The exceptional acting ensemble of Robin Arthur, Nicki Hobday, Jerry Killick, Cathy Naden, Terry O'Connor and John Rowley all perform with incredible, hilarious precision. With such a riotous production it's difficult to identify any single shining light, but this is because of the universal excellence, rather than the absence of a star. The work was also devised by this team and no written text was used in the development, leaving one wondering how director Tim Etchells and the actors conjured up such a complex piece. On the face of it, the production has simplicity to it, but the comic timing would not be as impactful without the pin point accuracy of the lighting (Nigel Edwards) and sound (Alex Fernandes).

The mayhem concludes with an extended sequence where many of the elements – the chairs, the balloons, the horns - return and intermingle in one final melting pot of mirth. We are also treated to a balletic variation of proceedings, which finally culminates in a standing ovation from the adoring audience.

Everyone will take something different from this multi-layered performance and given the tumultuous times we live in it functions believably as a political allegory – with the promotional materials supporting this. Whether you see Out of Order as a kaleidoscopic view of the absurdities of our time or simply enjoy it as the riotous extravaganza of physical comedy it is you'll have a wonderful time all the same.