I had been looking forward to seeing the Moscow City Ballet perform The Nutcracker and I’m happy to say I wasn’t disappointed. The opening sequence was ablaze with colour and as my eyes absorbed the beautiful, 19th century costumes, I was able to admire the expertise and amazing talent of the dancers. The tableau it presented could have easily been reproduced on a luxurious Christmas card with the giant Christmas tree in the background alight with candles and the party atmosphere with all the family gathered for the festivities.

The ballet comprised of two acts with a live orchestra playing a score by Tchaikovsky. It was a definite plus to recognise many of the pieces, albeit that a few have been used in television advertisements over the years. The classical ballet is based on E.T.A. Hoffmann's 1816 fairy tale, The Nutcracker and the Mouse King. It tells the story of a little girl who goes to the Land of Sweets on Christmas Eve. According to German folklore, nutcrackers bring good luck to your family and protect your home. A nutcracker is said to represent power and strength, serving somewhat like a watchdog guarding the family against danger. A nutcracker bares its teeth to evil spirits and serves as a messenger of good luck and goodwill. 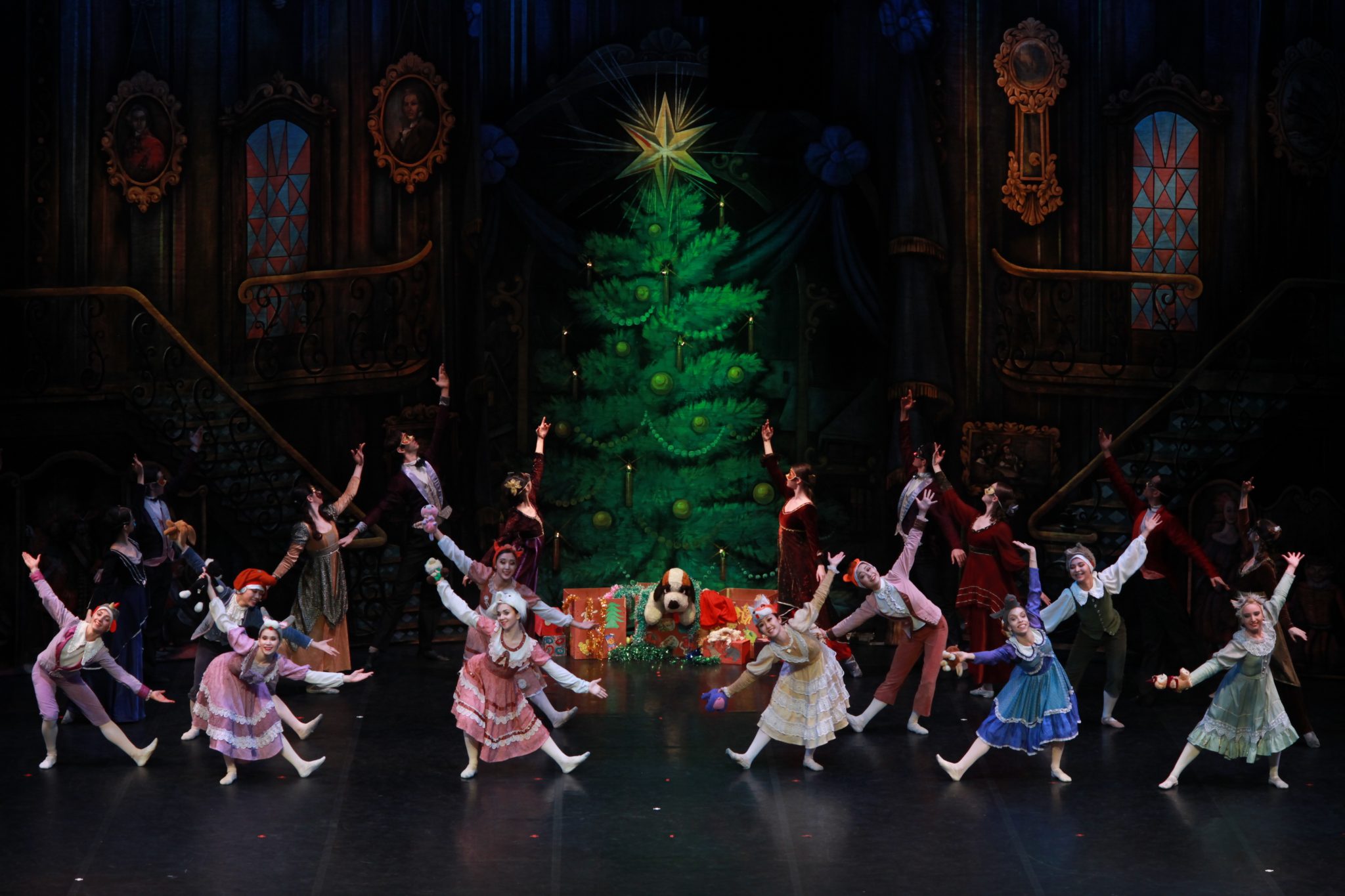 The ballet is traditionally a Christmas time favourite and has usually been an introduction to ballet for many youngsters. The theatre was packed with a mixed audience from young to old who encouraged each of the solo and ensemble performers with warm applause and admiration as all gave excellent performances.

The first act opens at the house of the town major Hans Stahlbaum and his wife on Christmas Eve. The family are getting ready for the party and the children, Clara and Fritz, decorate the tree as they wait for the guests and the gifts they hope they’re bringing, to arrive. The guests start arriving and last to arrive is the children's mysterious godfather, Herr Drosselmeyer, a talented toymaker, who delights everyone by getting the life size dolls he’s brought with him, to dance. Afterwards, much to the children’s dismay, he puts the life-sized dolls away but they soon cheer up when their godfather hands them their gifts. Fritz is given a toy train while Clara is delighted with her wooden nutcracker doll, but she is devastated when a jealous Fritz breaks her toy. Drosselmeyer manages to fix the doll and Clara and Fritz are then sent to bed, leaving their presents under the tree. Worried about her broken toy, Clara sneaks down to the living room to check on the Nutcracker. She falls asleep with him in her arms under the Christmas tree. Clara begins to dream and is astonished to find life-size mice dressed in army uniforms scurrying around the room. Her Nutcracker and Fritz’s toy soldiers have also come to life and are engaged in battle with the mice and their leader, The Mouse King. The Mouse King and his army are too strong for the Nutcracker and just as it looks like he’s lost the fight, the Nutcracker overthrows him. Clara is then transformed into a beautiful princess whilst the Nutcracker is also magically turned into a handsome prince and whisks Clara off to the Land of the Sweets, where they encounter many new friends, including the Sugar Plum Fairy. Other new friends entertain Clara and the prince including dancers from Spain, Arabia, China and Russia, who all dance for their amusement. The second Act culminates with Clara back at home.

The ballet is a delight for its breath-taking choreography (Victor Smirnov-Golovanov), musical score (Tchaikovsky), stunning costumes (Elisaveta Dvorkina), diversity and attention to detail.   Famous dancers who have performed the ballet include Rudolf Nureyev, Mikhail Baryshnikov, and Mark Morris.

The performance was two hours long which flew by and included a short interval which left the audience waiting for more. The solo performances by the prima ballerina and male lead were outstanding with skilful choreography and amazing ballet dancing which included elaborate lifts and intricate twirls. Each routine brought resounding appreciation and loud hand-clapping from the audience. Director Victor Smirnov-Golovanov came on stage at the end to take a much-deserved bow, whilst the audience gave the performers a standing ovation. All in all it was a delight from start to finish.