If you want to watch something fresh, raw, young and different, look no further than GUY: A New Musical. Directed by Aran Cherkez, the award-winning modern-day gay love story for everybody returns to Greater Manchester in its second iteration after premiering at Hope Mill Theatre in 2018.

The musical definitely makes some important points. Set in a world of where you are “online since the day you were born”, beauty standards, body positivity, self-worth, racism and eating disorders are all handled delicately in this four-man show led brilliantly by Ben Raymond in the title role.

His Guy is far from the stereotypes you might expect to be explored in this show. Flawed but loveable, complex, human, nerdy and a whirlwind of emotions, all backed up with killer vocals - a real highlight was his emotional delivery of Open Up in the first act. Raymond has something special and I can’t wait to see how his career develops. Definitely one to watch.

Starring opposite Raymond, we meet his best friend Tyler played expertly by Elliot Wooster. Wooster’s performance showcased a real ability to connect with his character’s inner emotions; and you really felt a true sense of betrayal and what it means to have your heart broken by a friend. A gifted actor.

Aarian Mehrabani ably plays Guy’s “love interest” Aziz in his professional debut. Infinitely likeable, his character has the important job of driving forward the plot and he handled this well. For me, there was however something lacking here, but I think it is more in the writing than Mehrabani’s delivery. Compared to Guy and Tyler, there isn't enough character development or setting the scene for Aziz at the beginning of the show - we see Guy’s awkward pitch to work on a campaign on Manchester’s Metrolink and learn about Tyler’s struggle as an aspiring actor, but we don’t really get an equivalent for Aziz. As a result, I don’t think we are bought into the character and therefore aren’t as invested in the growing relationship between him and Guy as we should be.

Completing the cast, we have Steve Banks who takes on a plethora of different smaller characters that provide much of the comic relief of the show. Deftly switching from one to the next in quick-time, Banks is a true chameleon of characterisation; able to instantly become someone else whilst blending into the scenes enough to not completely detract from the action.

On the subject of blending, it is usually a challenge for musical directors to get voices to do just that. In this show, I almost felt like they blended too much. All talented singers, we were treated to some fantastic harmonies, but I felt the predominantly tenor mix was missing a lower voice to add depth to the vocals. This is something that would need to be addressed in the orchestration, but it didn’t detract from what was overall musically masterful.

Technically, Andrew Exeter’s contemporary, minimalist set worked well and provided the flexibility needed to change settings quickly and I really enjoyed Ashley Luke Lloyd’s choreography, particularly in the physicality of the “breakdown” sequence but want to see more of it. A minor gripe I had was the visibility of not only mic leads but mic packs on some of the cast at times - even in amateur shows we do our best to hide these, no matter how challenging the costume.

The songs are definitely catchy, the cast are incredibly talented, and the story is heart-warming and compelling. This musical definitely has something, I’m just not quite sure what that is. Perhaps more “one-night stand” than “the one”, I think it’s still working out what it wants to be, but that of course is ok. After all, “GUY is a reminder that the only person you should be is yourself.” https://www.leoandhyde.com/guy.html 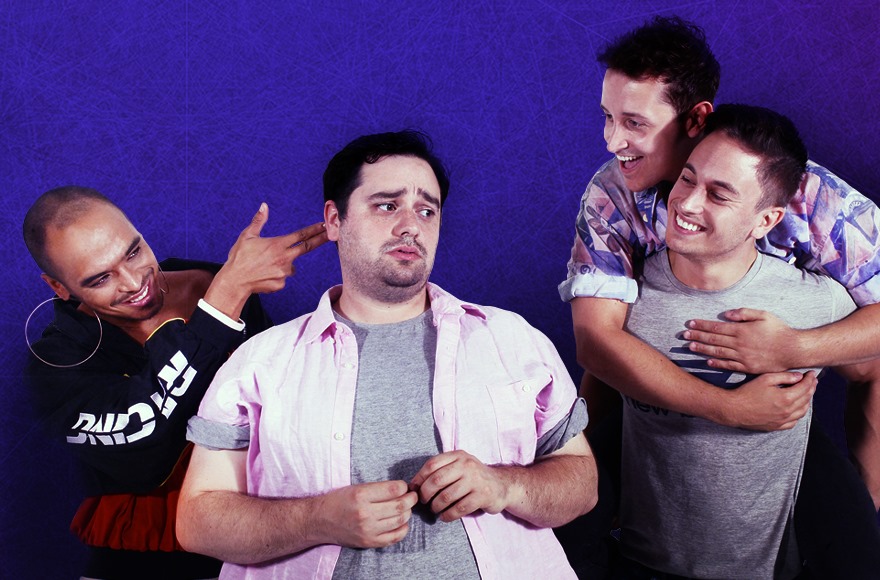