First performed at the Hampstead Theatre in 2014, playwright James Fritz’s Four Minutes Twelve Seconds resonates even more strongly today than when it first premiered. Now more than ever, information technology dominates our lives, drives our actions, and determines our futures. Behind a screen, you can be who you want to be, say what you want to say, and do whatever you want to do. But what happens when the anonymity afforded by this world is burst open, and the emotional consequences of our worst actions are felt in the real world by those we love? Oldham Coliseum’s production of Four Minutes Twelve Seconds (co-directed by Chris Lawson and Natasha Harrison) illuminates what could happen behind the screen, showing us a snapshot of one family’s life in Oldham, as their seemingly normal domestic life is upended, their identities are called into question, and all sense of control is lost. 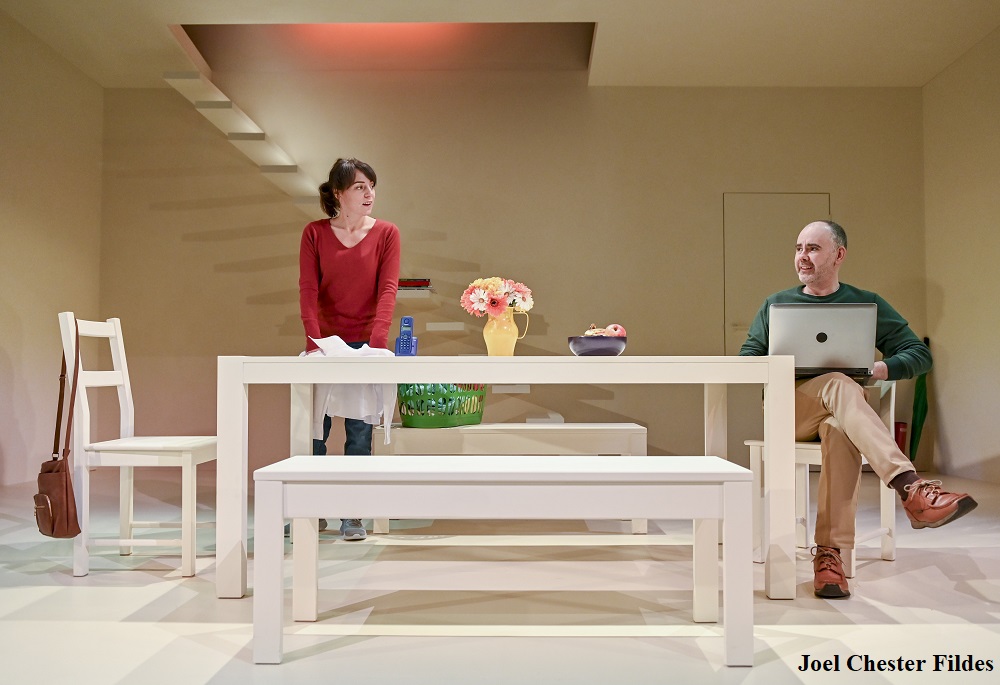 The play is very ‘dialogue heavy’ and follows the twists and turns of a linear story as parents Di (Jo Mousley) and David (Lee Toomes) cope with the unintended consequences of their sons’ life online. The life of the play is shown primarily in dialogue between this couple concerning their son Jake. It is through their eyes that the play explores moral and social dilemmas in a way which manages to be intimate, even though (or perhaps because) their son never appears in the play. This was a bold decision by the playwright but is effective, as giving Jake a voice would undermine the universality of the character and the situation.

Mousley and Toomes work together effectively to provide us with a warm and witty ‘every’ mother and father/husband and wife relationship and support on another throughout the piece. Similarly, Alice Liburd (as Cara, Jake’s ex-girlfriend) proves capable of embodying the anger and resentment of her character. In contrast, Noah Olaoye (Nick) adds a light and comedic charm to otherwise an extremely intense narrative. The performances by all four are subtle and nuanced, which is aided by excellent pacing in the dialogue in moments of breath and reflection and swelling doubt. This is captured by beautiful light and modern music choices.

The set is simple, but highly effective. A mirrored frame invites the audience to think about the broader reaches of ‘internet uploads’… everyone in the audience could access an intimate moment from a family home and become a spectator, with their own sets of opinions and prejudices. The interior of the space is clean white, with just two chairs, two benches, stairs, books, flowers and phone. The main set is all plain white the parameters of iPhone, very clinical but ‘every house’ like. Set designer Anna Reid provides a clever versatile space for the Fritz’s words to resonate and affect the audience; the removal of educational books from the stairs giving us a sense of the unseen Jake’s presence.

Overall the play is engaging and accessible to a very varied range of audiences. Gossip turns to tragedy in a modern world dominated by sex and technology. As relevant as ever, this is a show which provokes reflection and is artistically interesting and occasionally very beautiful. Now, given that it probably took you, roughly, four minutes and twelve seconds to read this review, go and see the show!