The Carpenters were a brother and sister duo who became the biggest selling act of the 1970's with no fewer than ten of their singles achieving sales of over a million. Sadly after a career lasting fifteen years Karen lost her battle with an eating disorder and passed away at the age of thirty two in 1983.

However her memory lives on, and the Grand Theatre, Blackpool, hosts Karen Carpenter - Voice of the Heart over several dates during their summer season of MusicFest16.

Carole Gordon whilst in no way tries to emulate the look of Karen, her vocals capture the clarity of Karens' voice and she gives a faultless performance with many of the most popular songs attributed to the Carpenters. Performing 'Sing A Song' followed by 'We've Only Just Begun' and a beautiful rendition of 'For All We Know' I was struck by how the audience were completely mesmerised and waited until the very last note was played before applauding, showing total respect to Gordon.

The fabulous Blue Jeans Band supporting, comprise of musical director and keys, Martyn Cooper, Andy Saphir- lead guitarist and vocals, Graham Walker - bass guitar, John Blackburn - drums. As a lover of saxophone it was a delight that many of this evenings songs featured the instrument and we were treated to the multi talents of Andy Potts, who was a stand in for the evening and also played the flute, oboe and clarinet. The band are a pure joy to listen to and reproduce the sound of the Carpenters. 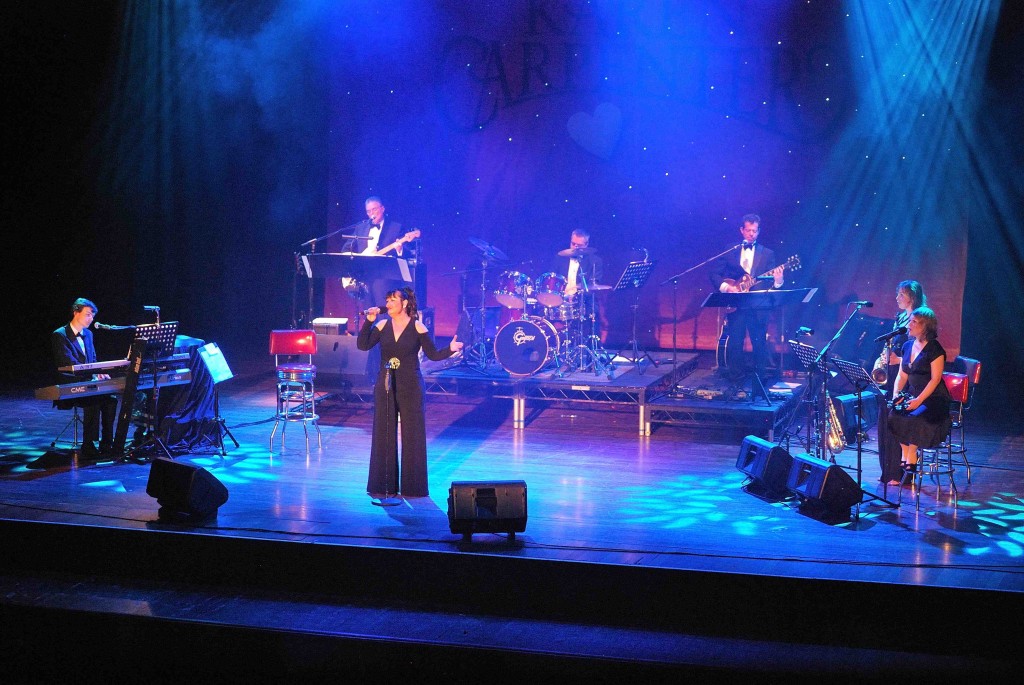 Also supporting are two backing vocalists, Rachel Cantrill and Gary Thatcher who bring wonderful harmonies to the show and are the perfect accompaniment to Gordon.

Between songs Gordon relates snippets of information about the Carpenters and her own love of their music and you can tell she is living her dream in performing in this show, which was created by Bob Gordon, (her late husband) and it was his wish she continue to perform as Karen. There followed a medley of Beatles songs with 'Ticket To Ride', 'Help' and with the audience clapping along to 'Mr Postman' which were all brilliantly sung in Carpenters style. At this point Gordon left the stage for a costume change and the band continued with a fantastic instrumental.

Upon return, Gordon, sounding hauntingly like Karen, sang 'The Masquerade' followed by the Carpenters biggest selling record worldwide, 'Yesterday Once More'. Continuing the relaxed pace with 'Rainy Days and Mondays' and the hit recorded by Andy Williams 'Solitaire' before taking us to the interval with more upbeat songs including 'Sweet Sweet Smile' and 'Jambalaya'.

The second half continues with more Carpenters hits before Gordon relates the story of the last recording Karen did whilst recording the Voice From the Heart album and performs a beautiful tribute of the song 'Now'. My personal favourite of the evening ' Make Believe It's Your First Time' followed.

Towards the end of tonight’s show there was a medley of songs not usually associated to the Carpenters and several were performed by the two vocalists and Gordon together. This I felt distracted from the Carpenters show and possibly was added to highlight the individual talents of the band or to give us a taste of their other show, Forever in Blue Jeans which is also on at the Grand over the summer season.

With a finale of 'Goodbye To Love' I can fully recommend Voice of The Heart for all Carpenter fans in a truly entertaining show.

With further performances on 17th and 31st August for further information see https://www.blackpoolgrand.co.uk/event/karen-carpenter-voice-heart/