The 1970's saw the arrival of glam rock in the music world, the origins associated to Marc Bolan, lead singer of a band he created, Tyrannosaurus Rex, later abbreviated to T.Rex. With flamboyant dress often involving glitter, satin and feather boas and introducing electric guitar to their sound they had immediate commercial success with a run of 11 singles ranked in the UK top ten.

Sadly Bolan lost his life in a car crash shortly before his 30th birthday in 1977, but thanks to tribute artists and a loyal fan base, his music lives on and tonight at the Grand Theatre Blackpool, featuring in the MusicFest16 is T.Rextasy, the only band to be endorsed by T. Rex management and are the worlds' only 'official' tribute to Marc Bolan and T Rex and also the only band who can rightfully use that title.

Danielz formed T.Rextasy is 1992 and has never looked back. He recreates Bolan in every way, his looks, his voice, his mannerisms and his stage presence are unbelievable along with his incredible lead guitar skills, make no mistake this is not 'just a tribute' this is as real as it can be. I was a teenager in the 70's and Danielz brought my bedroom posters alive on the stage, and along with many of the audience I felt 15 again! 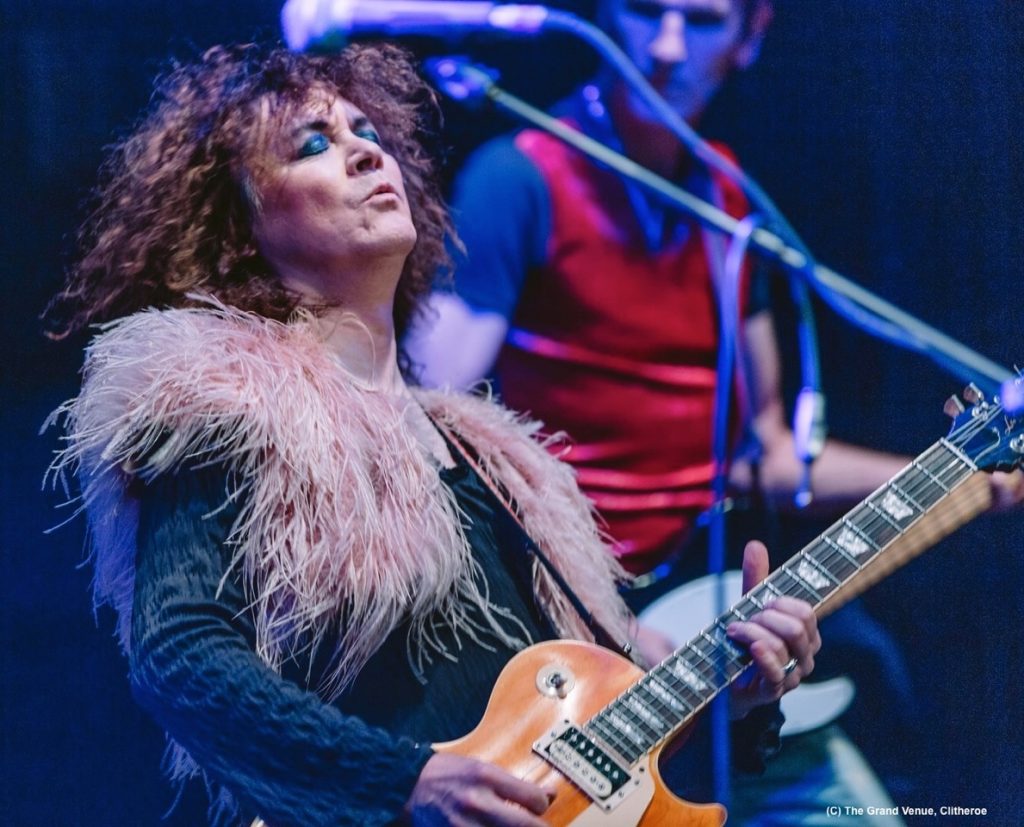 Unlike many shows where the audience can see the stage setup upon entering the auditorium, tonight the curtain is down, which added to the air of expectancy. There was a huge cheer as the curtain rose and the band launched into 'Raw Ramp' and here started the dancing, arm swaying and singing along as the show continued with popular 'Metal Guru' and 'Deborah' before performing the last single that Bolan recorded before his death, 'Celebrate Summer (1977) '. The stage was set simply with a backdrop curtain bearing the band name, a couple of side posters and a glitter ball twirling above, leaving all the 'glam' to Danielz, who did not disappoint with sparkly jacket, green flares ,white heeled shoes and the customary feather boa.

With a change in tempo and switching to acoustic guitar, Danielz and his band, Neil Cross on rhythm guitar and backing vocals, Rob Butterfield on bass guitar and backing vocals, John Skelton on drums and percussion, then performed a fabulous rendition of a song originally recorded by Ben E. King, 'Stand By Me' which was taken from the album ' Dance in the Midnight' was released in 1983 6 years after Bolans’ death. The sound is unmistakable, close your eyes and it sounds hauntingly as if Bolan is singing, which for a song not usually associated to him proves just how remarkable Danielz is in portraying him.

There followed many more songs which came flooding back into memory including 'Dreamy Lady' 'I Love To Boogie' (evident with this audience!) and 20th Century Boy taking us to the interval.

Tonight the audience were up and dancing in the aisles even before the curtain rose for the second half, (many of them wearing feather boas), so eager were they for the show to continue. They erupted into cheers as the band returned with 'Telegram Sam' 'Children of the Revolution' 'The Groover’ and 'Dandy in the Underworld.

Danielz can work an audience but tonight there was no need for encouragement to 'sing along and get out of your seats' as the audience provided backing vocals to 'Ride a White Swan' and proved just what boogieing is during ' Born to Boogie'.

There was a brilliant performance of guitar during 'Futuristic Dragon' bringing the show to a close, but as the chanting for 'more' got louder and louder, T. Rextasy returned to the stage with the iconic 'Hot Love' with a prolonged chorus of 'La la la, la la la la' allowing the audience to participate some more. (Go on admit it, you are now singing this song!)

There were youngsters at the front dancing along and obviously enjoying every minute proving this show is for everyone no matter what your age, just go along and enjoy the party. There is no doubt that T.Rextasy are simply T.Rex reincarnated.

T. Rextasy will be returning to the Grand theatre on Friday 26th August. For tickets and more information https://www.blackpoolgrand.co.uk/events/