If you love the sound of the 70's then head to Blackpool's Grand Theatre during their MusicFest16 event and enjoy a nostalgic trip back to that decade with the Solid Gold 70's show.

The intro theme to Top of the Pops plays, then sirens and searchlights fill the theatre, the curtain is raised and you are immediately transported back to 1973 as glam rock band Sweet's 'Blockbuster' is belted out by lead vocalists Janey Bombshell and Mark Keen.

With both of them and the band dressed in denim flares and a touch of sparkle the show continues with more great hits including ‘Xanadu ' (I will allow this one although it was released in 1980 from the soundtrack of the movie Xanadu, it was possibly recorded in late 1979); 'Substitute', 'The Things We Do For Love' and David Soul's (of 70's American cops Starsky and Hutch fame) ' Silver Lady' follow. Taking us to 1972 and the Eurovision Song Contest and when Great Britain actually had a chance of placement, we are treated to 'Beg Steal or Borrow' ' by The New Seekers who came second and then in 1976, taking first place with Save All Your Kisses For Me' by Brotherhood of Man. 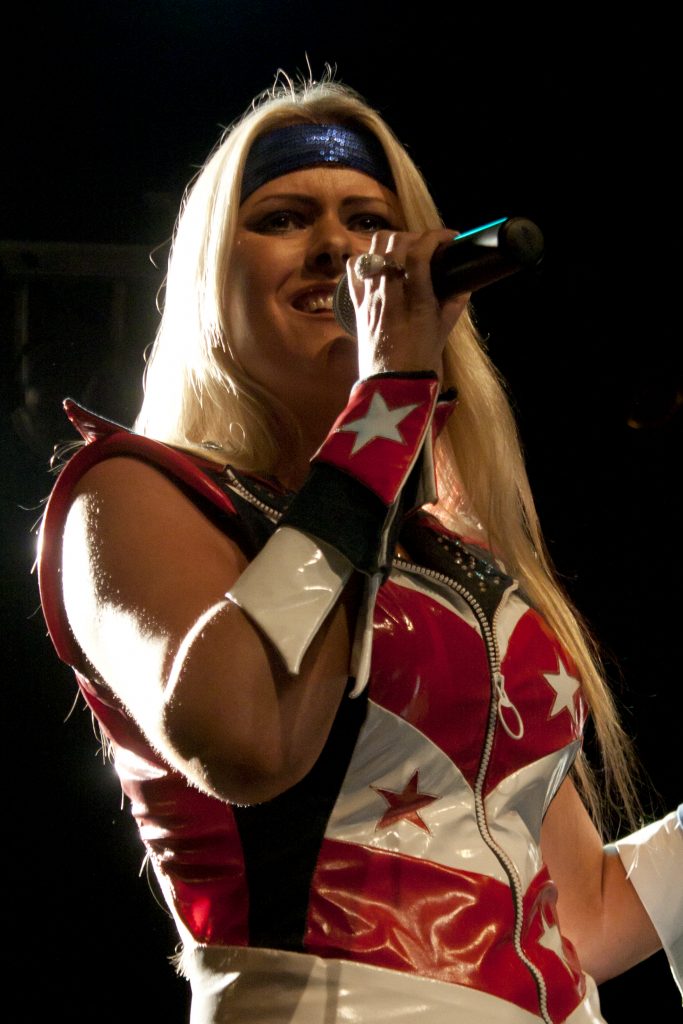 At this point there was a debate with the lady sat next to me and the man the other side of her as to who actually sang these songs and I am pleased to say that after googling for confirmation, my memory did not fail me, but perhaps mentioning original artists during the show would be of benefit for many of the audience.

We are told that bass guitarist Gary Williams has a hidden talent and was 1974 Blue Peter Champion at playing with those torturous 'Clackers', ouch, I remember the bruises! Judging by his skills with them tonight I very much doubt he received a Blue Peter badge! We are also taken back with a chopper bike being ridden onto the stage by Keen in the second half, the much coveted bike of the decade, branded as 'THE HoT oNE' for its 1970 launch. Andy Stewart on keyboard is following the footsteps of performing at the Grand theatre as his late grandfather, who was no other than the late great comedian Arthur Askey. On drums is Andy Fox who has performed with Thin Lizzies Brian Robertson. Sadly little is seen of the two Andy's, as for much of the show they are shrouded in smoke effects however we can hear their great skills. Throughout, the lighting is bright and colourful but quite basic.

No 70's show would be complete without songs from the iconic film 'Grease' and Keen dons leather T' Bird jacket and dodgy latex quiff wig to become Danny Zuko. Janey returns wearing the pink satin bomber jacket associated to the Pink Ladies of the film and the two perform several of the hits individually and together.

Janey is a big fan of Abba so performing one of their songs is a given. I particularly liked hearing tonight, ‘Goodbye to Love' a Karen Carpenter hit, featuring great lead guitar playing by Greg Hart.

After a 20 minute interval the show continues with the band now dressed in gold satins and Janey in a gold catsuit with huge shoulder decorations..... Yes this really was the fashion of the 70's!

There follow many more iconic songs including hits of the Bay City Rollers, Osmonds, Suzi Quatro, Elton John and Kiki Dee and many of the audience are singing along to 'Chirpy Chirpy Cheep Cheep' which topped the charts in 1971 for Scottish band Middle of the Road. Hart, the lead guitarist, gives an absolutely brilliant vocal rendition of T Rex's 'Hot Love' and I would actually like to hear him sing more during the show.

There is an abundance of toe tapping, arm swaying and dancing going on and at the front of the stalls perfect formation dancing to Tiger Feet from some of the audience. It seemed a shame that just as everyone was up dancing, the final song of 'Mr Blue Sky' had everyone sitting back down again. To a standing ovation and shouts for more the Solid Gold 70's returned with 'We Are The Champions,' finally leaving the stage to the tune of 'Remember You're A Womble'.

Keen and Janey perform well together and are easy to listen to, even the cheesy dance routines which would be so dated today are perfect for this show, Keens relaxed and cheerful manner is enough to make any kid cringe at the 'dad dancing' moves! The supporting band each display their talents and compliment the two singers.

The whole show is an enjoyable performance guaranteed to stir memories of the past depending upon your age but can be enjoyed by all the family, the young teens in front of me were singing along for much of this evening and it is shows like this that keep the music alive.

The Solid Gold 70's Show returns to the Grand on Thursday 11th August and Thursday 25th August. For tickets and more information https://www.blackpoolgrand.co.uk/event/solid-gold-70s/