Well they do say “you can’t beat live entertainment” and seeing a band, or in this case vocal harmony group, do their thing live on stage at a concert venue is possibly the best thing you can ever enjoy. This evening the beautiful gem that is the Stockport Plaza paid host to the classically-styled trio Blake and their eclectic mix of genres.

Established in 2007 by Ollie Baines, the group also features the incredible talents of Humphrey Berney and Stephen Bowman, all of whom were reunited when Ollie sent a group message out to his schoolmates on Facebook to try and establish a singing project. Thankfully, including former member Jules Knight who has since pursued a successful acting career, their hard work and talents paid off when they signed a 5-album record deal. Ollie and Humphrey were both Choristers from a young age and Stephen apparently trained doing karaoke!

Now, alongside their 4th album ‘In Harmony’, they are touring the UK, with special guest Camilla Kerslake for some dates and a local community choir at each venue. Tonight’s show included pieces performed by and with the ‘Do Your Thing’ choir, made up of two groups consisting of 77 woman and 3 men, all of whom should be congratulated for being in such fine voice and showing their enjoyment.

Having performed with the likes of Alfie Boe and Katherine Jenkins at some of the UK and World’s most prestigious venues, it is no surprise these guys have got the art of audience interaction and pure public performance down to a tee, sparking thunderous applause in perfect unison, even if the swaying of arms wasn’t.

Starting their set with ‘Bridge Over Troubled Water’, before Ollie took to singing Charles Aznavour’s ‘She’, ‘Nella Fantasia’ from the film The Mission and their spin on Snow Patrol’s ‘Chasing Cars,’ they progressed to welcoming the choir with ‘You Raise Me Up’ - a song they have previously recorded upon request by Camilla Kerslake who asked them to sing for her campaign to raise funds towards treatments for and raise awareness of Breast Cancer. With solos of ‘Summertime’ (Humphrey) and Elvis Presley’s Love Me Tender (Stephen) throughout, then came the most covered song (and the first song they recorded) ‘Hallelujah’, ending the first half with Andrea Bocelli’s ‘Because We Believe’.

Act Two was opened with the choir singing Queen’s ‘Somebody to Love’, before welcoming the trio back for the swaying was requested for ‘Up Where We Belong’ from Officer and a Gentleman. U2’s classic ‘With Or Without You’ was well received, as were Stephen’s version of Nat King Cole’s ‘When I Fall In Love’, Ollie’s ‘On The Street Where You Live‘ from My Fair Lady and their collective of Sting’s Fields of Gold which was also been recorded by Eva Cassidy.

Bringing stories of interest to the stage like who sang the songs of Eliza Doolittle instead of Audrey Hepburn and it being the same voice who sang the songs of West Side Story and appeared as a nun in The Sound of Music, are priceless and add to the passion and enjoyment they have to their careers. Sticking with Musical Theatre for the ever emotive Bring Him Home, which Ollie mastered with ease. Finishing off with Puccini’s Rugby rose that is ‘Nessum Dorma’, before taking the trick out of their sleeve in the form of ‘Jerusalem’, with full audience participation.

Accompanied by the wonderful Martin Riley who somehow manages to play ever instrument required in just two keyboards and a grand piano, the show is really well formatted with modest projects of the band name on a curtain behind the artists.

Their next studio album hopes to be funded by donations or pledges from fans who have the opportunity to trade donations off for afternoon tea with the lads, presence at the studio, singing lessons, calendars and much more.

For details of the boys’ tour dates and their album progress, visit www.blakeoffical.com 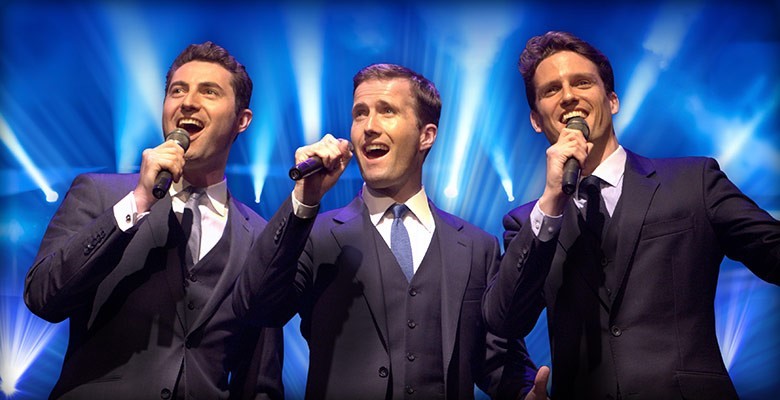