So, what do you get when you cross a Liverpool-born singer with a country-styled genre who lives in Ireland? The wonderful talent that is Nathan Carter of course!

On the second stop of his UK tour, after his birthplace, The Lowry's Quays Theatre welcomed this charismatic chap back for another sell-out stint, this time for two nights after the first sold completely within a matter of hours.

Supported by Niamh McGlinchey, a singer-songwriter from County Derry with the same country style who has been touring with Carter; a tour bus full of an all-male band, and his gran; the main part of the show really makes for a great night's entertainment whether you like country music or not, complete with a grand opening, grand leaps from the small but grand staircase and even a grand piano - one of the many instruments this talented entertainer is competent in; accordion, guitar, piano, etc.

Niamh's set includes a mix of originals and covers from the likes of Dr Hook, Christie Hennessy and Nancy Sinatra, with self-penned 'Crossroads' and the 'Little Dreamers' lullaby which feature on her new album, finishing off with 'Brand New Key' (aka the original of Brand New Combine Harvester) and 'Streets of London'. Ably accompanied by the multi-talented Gareth on percussion - a one-man band himself with various instruments - and John on guitar (both of whom are also in Nathan's band).

Then comes an interval, where fans and newbies are welcome to meet, chat to and get a selfie with the support singer, before the main event.

Opening his set with the wonderfully catchy 'Wagon Wheel', which appears as the first track on his Beautiful Life album, the atmosphere is electric even before he sets foot onto the beautifully lit stage, the band scattered around. Making reference to his gratitude of being able to return to The Quays Theatre - possibly his favourite theatre space - for another stellar performance, it is clear that he enjoys what he does, putting his heart and soul into entertaining, something he has done from a young age, getting his first accordion at the age of 8.

We are treated to Irish classics (Up Donegal! to name one), country favourites and self-penned songs of 'that city' Liverpool. The title track of his album is second on the set list before 'King of the Road', before we hear 'Caledonia', 'Good Luck to the Girl Who Said She Loved Me', 'I Can't Stop Loving You', 'The Boat To Liverpool', Dolly Parton's 'Two Doors Down' and the humorous 'Tequila Makes Her Clothes Fall Off' (in no particular order as I can't read my own handwriting) along with many more. Finishing off with the emotive 'The Town I Love So Well', to a standing ovation, before the upbeat finale, we are encouraged to sing along to Loch Lomond and Jamie McAvoy's South Australia.

Making for a truly special night of fun, enjoyment and general self-indulgence, you will, as I am sure many did here, leave the theatre as a new fan of the boy with many more years to give which I have no doubt will be spent entertaining the world.

I must conclude by congratulating Nathan and the band on their winning of two Irish TV Country Music Awards last month.

Due to popular demand, 30 extra tickets have been released for tonight's show. More details about Nathan can be found at www.nathancatermusic.co.uk 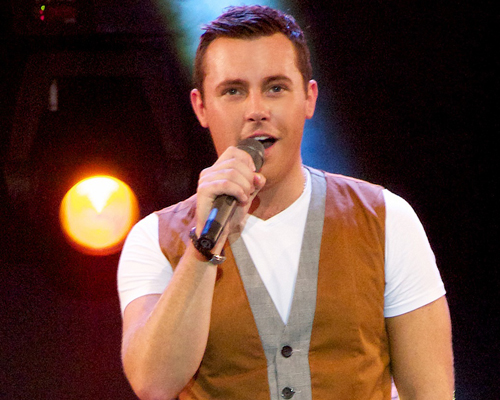