'Oh What a Night!' Ok, so those familiar with 1960's group the Four Seasons will know that is the title of one of their songs but it is also a very apt statement for the performance given in the tribute show 'Big Girls Don't Cry' featuring the East Coast Boys who are currently touring the country with their sixth year on the road.

As half expected they launched straight into 'Big Girls Don't Cry' and that was it.... the audience with were with them for every (dance) step and song for the rest of the show! The four guys portraying Frankie Valli, Bob Gaudio, Tommy DeVito and Nick Massi have mastered the accents and stayed in character for the whole evening. Their interaction with the audience was abundant and delighted throughout the show, whether it was comments about visiting the local J. D Wetherspoons or having a pastie, to adding 'Preston' to their list of worldwide concert venues which included Boston Chicago and New York. Preston is now on the map! 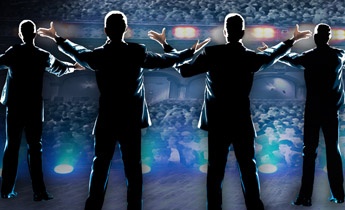 Backed by a fabulous four piece band consisting of drums, 2 guitarists and keyboards they recreated the sounds of the 60's perfectly. Although the band were introduced at the end, it was difficult to catch all their names as the applause was deafening, however the bass guitarist Martin Roach was particularly memorable with his banter with The Four Seasons which added to the fun of the evening.

There followed iconic songs including 'Lets Hang On' Working My Way Back To You' and the unforgettable 'Rag Doll'. The harmonies were faultless and the vocal range of Michael Pickering (Franki Valli) is incredible from bass to falsetto which he performed effortlessly. Again I was unable to catch all of the names and researching on their official site it appears there are several different performers that can make up the Four Seasons however I was able to note Adam Anderson as Nick Massi and Daniel Holley as Tommy DeVito but there are four possibilities for Bob Guadio so my apologies for being unsure who to credit during this performance. Each and everyone had stage presence and together they create a fantastic show.

It's simply an amazing 'coincidence' that in the audience we had ladies with the same names as some of titles of hits of the Four Seasons and these were performed for each with 'Marlena' plucked from the safety of her seat to the stage to be serenaded on stage. She was an extremely good sport and joined in with the song. There followed my all time favourite 'Dawn' and ' C'mon Marianne' before the groups first number one song 'Sherry'.

Included in the show was the lesser known song, 'Peanuts' which you can be forgiven if you did not know as it was originally performed by the Four Seasons under the name of 'The Wonder Who?' just one of the many names they performed under.

The Charter Theatre in Preston has a wide space between the stage and the first row of seats and this was put to good use tonight with many of the audience up and dancing. This was actually better than people standing at their seats which often obscures the view for those behind and gave the show a real good party feel. The group members came down into the audience several times and the banter between them and a couple of individuals is light hearted and entertaining. All four guys have charisma and know how to treat an audience.

All too soon the show came to an end with again another apt song, 'Bye Bye Baby' (yes it was the Four Seasons who first had a hit with this and not the Bay City Rollers!) but this audience were not going to let it end there and there followed 'Stay just a Little Bit Longer' 'Lets Hang On', and 'Oh What A Night' before they finally left the stage. By now everyone was standing and singing. The whole evening passed quickly and so many songs were performed during the show but what better acclamation than to leave an audience wanting more... The East Coast Boys and their show 'Big Girls Don't Cry' did just that in the best possible way! I will certainly be 'Making My Way Back To You' when you return!

The tour continues and for more information: http://www.eastcoastboys.biz/tour-dates.html