Shawn Klush is an American tribute artist to the one and only Elvis Presley and is currently touring the UK with his show. Supporting him tonight are the Sweet Inspirations, Estelle Brown and Portia Griffin. Brown was an original member of the Sweet Inspirations who performed with Elvis from 1969. Also in the show tonight are two other Elvis tribute artists, 20 year old Jake Rowley from Texas and Juan Lozano from Wales.

First onto the stage at the Preston Guild Hall and making his UK debut is Jake Rowley, dazzling in red glittery jacket and singing the first Christmas song I have heard this year 'Santa Claus Is Back In Town'. Continuing with 'Don't Be Cruel', 'Heartbreak Hotel' and then with amazing deep vocals he gives a great performance of 'Such A Night'. Rowley continues to wow the audience with several more classic Elvis hits and certainly left the stage leaving us 'All Shook Up'! This young man will go far, hard to imagine he was born almost 20 years after Elvis died and its acts like this that will keep the memories alive. 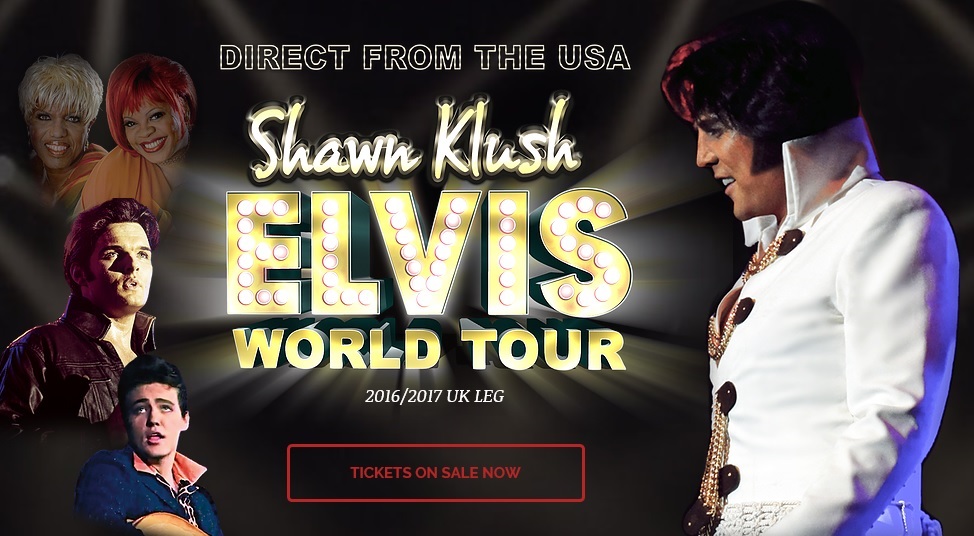 We are then treated to the superb Sweet Inspirations who sing, what other, than their signature tune 'Sweet Inspiration'. They truly are wonderful to see on stage and still performing and able to share memories of working with Elvis.

Regrettably, Ben Thompson, advertised to perform this evening was unable to, due to unforeseen circumstances, but fortunately the fabulous Juan Lozano was drafted in as replacement. Lozano hit us with songs from the Movie Years with first up, from the 1960 comedy starring Elvis with the title track 'G.I. Blues', and apologises for not being in uniform! No matter, although all the ladies love a man in uniform he is forgiven as he still looks the part, evident as he woos the audience when he leaves the stage and wanders around the auditorium, much to the delight of many of the female members lucky enough to be serenaded with 'Angel,' from the 1962 Follow That Dream movie. Other songs from the movies include 'Kissin' Cousins' and taken from Viva Las Vegas 'Lovin' My Baby (and My Baby Loves Me)'. Taking us to the interval with a final song of 'Viva Las Vegas' he left the stage with the party in full swing!

With the infamous intro music of Space Odyssey 2001 favoured by Elvis and accompanied by searching spotlights make no mistake.... Shawn Klush has entered the building! Wearing a white studded caped jumpsuit and playing guitar he launches straight into fast paced 'C.C Rider' followed with 'Burning Love'. He is accompanied on stage by the Sweet Inspirations, Lozano and Nicole (sorry Nicole only your first name was mentioned) adding the backing vocals. The audience love him, many clamouring to get silk scarves from him which he generously gives out through several of the following songs. I particularly loved hearing Klush perform 'The Wonder of You' which judging by the thunderous applause and cheers was a favourite of many of the others there too. Klush is a showman and builds a rapport with the audience and makes full use of the stage. There is a captivating rendition of 'How Great Thou Art' featuring the Sweet Inspirations and an electric atmosphere as he performs 'American Trilogy'. Performing 'Can't help Falling in Love' as the final song, the audience give a standing ovation and despite cries for more this was not to be.

In 2007 to commemorate the 30th anniversary of Elvis's death, the BBC launched a programme in search of 'The World's Greatest Elvis' with 30 of the world's best Elvis tributes taking part. Shawn Klush, as one of the celebrity judges Suzi Quatro commented, 'Nailed it' and was crowned 'The World's Greatest Elvis, surely the ultimate accolade! Other celebrity judges were Joe Eposito, Elvis's best friend and tour manager and Craig Revel Harwood.

Tonight, Shawn Klush 'Nailed it' again, along with a fabulous six piece band, the unforgettable Sweet Inspirations, support acts Jake Rowley and Juan Lozano and not forgetting vocalist Nicole together with fantastic sound and lighting the Shawn Klush Elvis World Tour is one not to be missed.

My gripe of the evening though is the non- stop stream of people heading to the bar disrupting others and those who insist standing and obscuring the view of those behind. Dance by all means but please give consideration to others who would like to watch the show seated. Move to the sides or rear of the auditorium!