The ground is still warm from the bonfire at Guy Fawkes but I'm at my first Christmas themed show of the show, the Eurovision Christmas Party at Stockport Plaza.

Now Eurovision is fun, cheesy and always a spectacular of a show, sadly the Christmas party falls very short of my expectations. The set list sounds like a who's who of Eurovision royalty with the likes of Katrina and the Waves and Bucks Fizz but it was a show of mixed efforts.

The show opened to a dance medley of Eurovision hits through the years, I knew when I saw this, what the standard of the entire show would be, the dancers were talented but a lack of choreography and I can only presume a short time to practise meant that it looked like a school's end of year performance, it was messy and disappointing as the talent on stage was good, just not utilised.

Unfortunately, the school disco style performance continued as we were introduced to our hosts, a conchita look-a-like and Madame Ooh la la who were more oh no no, as they awkwardly welcomed us to the first act; Nicki French. As giving it your all goes, Nicki gave it all, it just came across a little weak, and like a headteacher during the school disco, she wanted us all to have a good time and to be fair, we were all dancing with her, like people do when someone they know is drunk at the office party. second on the bill was Jo and Jake who were this year's British entry at the Eurovision, they performed well and got the audience dancing and singing with a fairly good stage presence, I didn't really understand why they were lowering themselves by performing at what I can only describe as a cross between the mockumentary; Peter Kay's Pop Factor and a PTA fundraiser in a school hall. 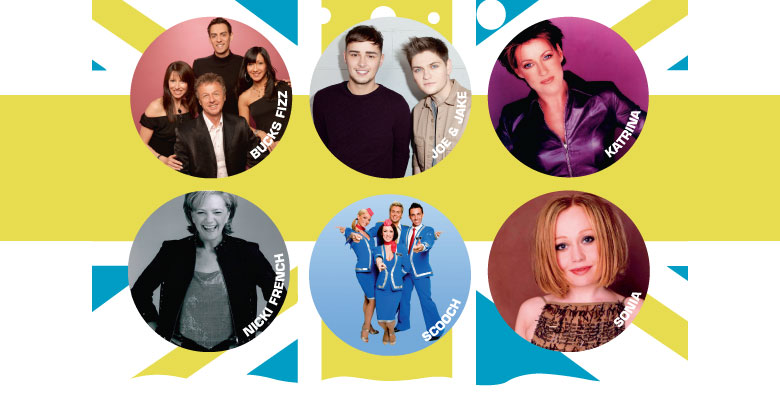 Scooch were the final act of the first half and were fun and silly and I think they had taken on the board the fact that they are a novelty, don't get me wrong I wasn't expecting an evening of beautiful pitch perfect soulful music but there was a significant lack of Eurovision glamour and excitement, luckily things picked up in the second half.

To be honest, the second half was like a different show, the first act on after the interval was Sonia; and she was brilliant, really lively and energetic, full of life and personality, she had the audience dancing and singing to her hits, songs from grease and of course her Eurovision entry, I remained hopeful for Bucks Fizz who followed her, they too put on great show and their set was complete with the original Eurovision routine with the Velcro skirts, which was a real fan favourite of the night.

By far the best act of the evening was Katrina who closed the show, she managed to somehow still be cool while at a Eurovision Christmas Party show, she showed off her impressive vocal talent while belting out classic songs such as Eurythmic' 'Sweet Dreams' and Bananarama's 'Venus' and got the entire audience in the party mood, the show closer was of course; Katrina's 'Walking on Sunshine' which was the highlight of the show for me personally. This show is a strange one, everything got better in the second half, the singers, the sound, the dancing standard, special mention should go to the dancers who were extremely talented, although the routines in the first half were poorly rehearsed/put together, they turned it round in the second half and the show came together, if not a little too late.

I would still recommend going to see the Eurovision Christmas Party Show but don't be too worried if your late to the show, say by about an hour!