Cara Dillon has been around on the professional Celtic and folk music scene since the early 1990s, initially with her own band Oige and then joining the folk group Equation in 1995, leaving that to form Polar Star with Sam Lakeman and then becoming a solo artist in 2001.   With a background in traditional Irish music, she started performing while still at school and won the All Ireland Singing Trophy at Fleadh Cheoil na hEireann at the age of 14. Traditional Irish music still forms a significant part of her repertoire.

Six albums, numerous tours, marriage to Sam Lakeman and three children later, she is back out on tour with a Christmas themed show, with a new album 'Upon A Winter's Night' released to go alongside this show, combining traditional Celtic and English songs and carols along with some self-penned tracks and a couple of surprises.

Cara Dillon has a classic folk voice and many of these songs show it off to great effect, especially the unaccompanied number which opens Act two. Her duet of Silent Night with guitarist John Smith is hauntingly beautiful. Smith along with Sam Lakeman on guitar and piano, Niall Murphy on fiddle and Luke Daniels on accordian provide her musical accompaniment and her backing vocals.

Act one contains more traditional style Celtic music while Act two has a slightly more modern feel and includes a stunning rendition of The Pretenders song 'Two Thousand Miles. Given a folk twist, Dillon manages to make this song as much of her own as Chrissie Hynde did the original. Even her dress style changes – from an ethereal looking calico long skirt and hooded jacket, to a shorter fifties style Christmas green dress.

A simple set of microphones, musical instruments, a few large white stylistic Christmas trees and a lot of candles, provides the perfect background for performance. Evocative but not distracting. Her musicians are highly talented in their own right and Niall Murphy's fiddle playing stands out as one of the best around. There are even a couple of numbers with no vocals and Cara Dillon proves very adept with the sleigh bells.

In between songs are stories and memories which emphasis not only the close nature of the relationship between Dillon and Lakeman, but also the great friendship that exists between them all.

While this might not be the show for modern music fans, it is an excellent showcase for Cara Dillon and some traditional Christmas music. 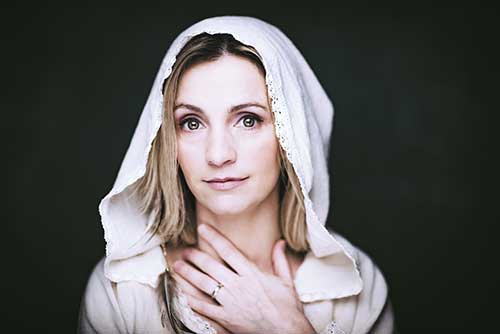