Celebrating the 40th Anniversary of the Out Of The Blue Album Release in 1977 the talented tribute band ELO experience graced the stage of the Opera House Theatre in Manchester on a very cold and blustery autumn evening.

With the tribute band playing in Manchester for one night only I was very surprised to see that there were only approximately 200 people who were present to watch this fantastic band, however the numbers didn’t seem to matter as the avid fans bobbed their heads and clapped their hands to the music.

The original Electric Light Orchestra (ELO) rock band formed in Birmingham in 1970, by songwriters/multi-instrumentalists Jeff Lynne and Roy Wood with drummer Bev Bevan. Their music is characterised by a fusion of Beatlesque pop, classical arrangements, and futuristic iconography. After Wood's departure in 1972, Lynne became the band's leader, arranging and producing every album while writing virtually all of their original material. 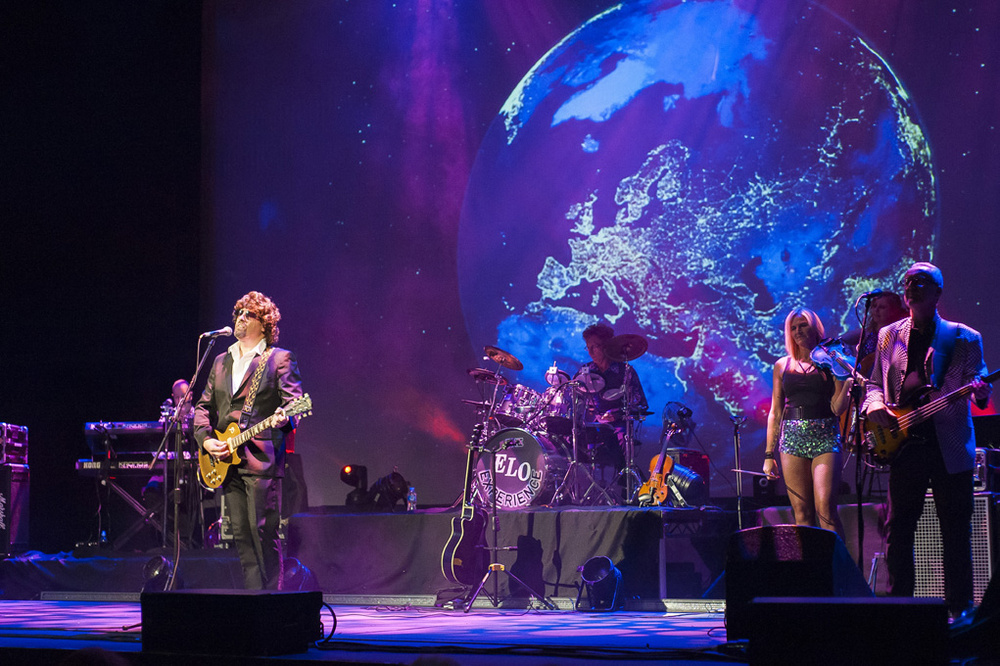 The original band was formed to accommodate Lynne's and Wood's desire to create modern rock and pop songs with classical overtones, deriving as an offshoot of Wood's previous band the Move, of which Lynne and Bevan were also members. During their 1970s and 80s heyday, they recorded a string of studio albums that include the conceptual works Eldorado (1974) and Time (1981). For their initial tenure, Lynne, Bevan, and keyboard player Richard Tandy were the group's only consistent members. In 1986, Lynne lost interest in the band and ceased its operation. Bevan responded by forming his own band, ELO Part II, which later became The Orchestra. With the exception of a short-lived reformation in 2000–01, ELO remained largely inactive for the next three decades.

During ELO's original 13-year period of active recording and touring, they sold over 50 million records worldwide. Despite early singles success in the United Kingdom, the band was initially more successful in the United States, where they were billed as "the English guys with the big fiddles."

The ELO Experience is the world's foremost tribute to The Electric Light Orchestra. With a sensational string section, a stunning light show and large screen projection to further enhance the experience created an incredible show which takes you on a magical musical journey through time.

The ELO Experience has been bringing the music of Jeff Lynne and The Electric Light orchestra to the live stage for over 10 years.

The eight-piece band consisted of five talented gentlemen and three stunning ladies who played the cello and violins, opened the night with ‘all over the world’ as the crowd beamed with pleasure. The audience seemed to be allowed to record and take pictures throughout which seemed a little alien to me as a theatre goer where this is strictly banned but seemed to enhance the evening for the fans of this band – the musicians actively encouraged the audience to clap and join in with their performance much to the delight of the auditorium residents.

In 2016 Jeff Lynne’s ELO came back to prominence with the release of a brand new album - Alone in the Universe and a UK and World tour. The ELO Experience 2017 tour includes some of the new material from the new album but had many songs from the Out of The Blue album to celebrate its 40th Birthday year - Blending rock rhythms with classical influences.

Throughout the evening the songs came thick and fast with amazing tracks like ‘Evil Women’, ‘Shine a Little Love’, ‘Starlight’, ‘Xanadu’, ‘Wild West Hero’, ‘When I Was a Boy’, ‘Confusion’ and many more creating a frenzy of joy for the fans.

ELO experience band are a fantastically talented group of musicians so it seemed a little disappointing that the auditorium was not full to capacity – it did leave me wondering if this was because the original band are back on tour and producing new material.

A great evening’s entertainment which I would recommend to anyone who is an ELO fan.