So, another television talent show star has carved a career since winning on Stars in Their Eyes way back in 2000. People either love or loathe these talent shows and the same can be said for tribute acts and tonight there was no doubt that the majority of the audience at the Opera House, Manchester, loved Gary Mullen and The Works, performing as the late Freddie Mercury and his band Queen. How can it be almost 26 years since he passed away in November 1991!

After success as a solo performer Mullen then formed the band in 2002 and created the show 'One Night Of Queen,' they are now celebrating their 15th year touring anniversary. Mullen appears onto the stage clutching microphone and strutting his stuff to the first bars of 'One Vision' and utilises the stage to full effect, engaging with the audience from the start. Wearing the yellow jacket, vest and white trousers outfit synonymous to Mercury it is obvious Mullen goes for the full image and at times you can see a passing resemblance to the late stars features. 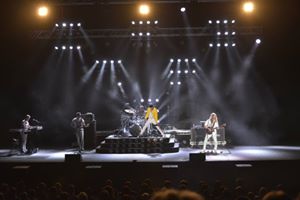 As he and the band perform hit after hit including 'Another One Bites The Dust' (no Hoover here though!) 'Don't Stop Me Now' and a fabulous rendition of 'Seven Seas Of Rye' the audience are continuously encouraged to stand, sing and clap along. By the interval Mullen has divested of jacket and vest and now bare-chested continues to give an energetic performance, maybe not quite as theatrical or charismatic as Mercury, but nevertheless entertaining.

The Works consist of four band members with Davie Brocket playing lead guitar and on several occasions he was given the opportunity to showcase his skills. Jon Halliwell performed well on drums giving a solo performance displaying his dexterity with the old 'sticks'. On keyboard and bass guitar are the equally talented Malcolm Gentles and Reg Moffit.

The sound and lighting supplied by Basset Audio of Durham for the whole show was excellent and the many spotlights captured the mood of the songs, as they changed colour and flashed across the auditorium although I am glad to report they did not detract or dazzle as can happen in many shows.

After the interval the stage once again bursts into life with a recorded intro of 'Flash' and a light show before Mullen and the band once again launch into songs such as 'I Want It All' and 'Killer Queen'. There is no slowing down in pace and Mullen commented that although this was a much smaller audience than they expected they would continue to rock the place. He also mentioned he usually sang a ballad next but would carry on with other songs which made me wonder what else may have been omitted from the show. Sadly, only half the stalls were filled and I do feel this led to a lack of atmosphere for the show initially and the need to encourage audience participation, although by the end of the two hour show (including a 20 minute interval) most were up and dancing away, with plenty of interaction with 'Radio Ga Ga', and arm waving to 'We Are The Champions'.

I sadly never made it to any of Freddie Mercury’s shows but tonight experienced a fitting tribute to the star.

The show continues and for more info and tour dates: http://www.garymullenandtheworks.com/tour-dates