If you like brass band music, then you couldn't get much if any better than the famed Grimethorpe Colliery Band. With a list of accolades as long as your arm, including the four times winner of the British Open Championships, you just know that you will be listening to some of the finest triple-tonguing there is! And of course they did not disappoint! Excellent musicians playing some extremely difficult music effortlessly and sublimely!

What I don't understand is why, with such a progeny, they still feel the need to ride off the back of their claim to fame as the band which was the inspiration for and played the soundtrack to the film, Brassed Off. The film was released in 1996, that's almost 20 years ago! Has the band not got anything to show for the last 20 years that it needs still to be plugging this, when anyone under the age of 30 probably won't even have heard of the film?!

However, as soon as the band struck up their first pitch-perfect note and played the lively Florentiner March by Fucik, you totally forgot this fact. Oh, no, sorry... no you didn't.... they had a projection screen behind the band on stage onto which stills and sequences from that film were shown throughout most of the first half of the concert!

This also leads me very nicely on to what was actually my overall impression from last night. The band is first class... their musicianship and mastery of music-making unquestionable, and certainly they have a huge following judging by an almost capacity Lyric Theatre.... so please do away with these extraneous and unnecessary effects of strange lights, smoke, star curtains, gobos and projections. They simply distract and diffuse. We came to hear brass band music - not watch a rock concert or a light show!

I was further disgruntled last night by what turned into a pantomime routine and a competition between us, the audience, and other audiences that they have so far encountered on their tour. We were asked to sing and clap to a couple of songs, and the band then marked our performance out of 10. We heard that Aylesbury were the worst - in fact they could say nothing good about Aylesbury. And after our singing we were awarded joint leaders with Nottingham on 8 points. So we had to clap along to the next piece of music to see if we were worthy to win, and so after clapping to The Radetsky March, the conductor graciously awarded us a 9! Was all of this pathetic banter really necessary??!! Was deriding Aylesbury really a wise decision? And did we, the audience go along with this pantomime because we really enjoyed it and thought it a splendid idea or did we just humour the conductor and band?! I suspect the latter! 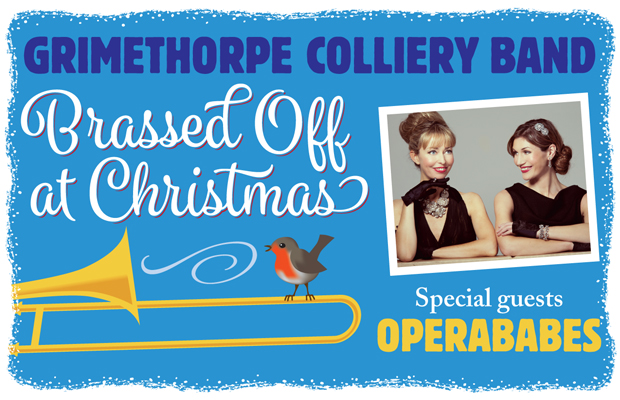 Their concert was further diffused by inviting another act to join them in a couple of pieces. They were 2 female opera singers who together are known as The OperaBabes. They sang one short song in the first half and a set of 3 in the second. Beautiful voices and indeed lovely to both watch and listen to. But again, I just question why the band deemed it necessary to have a "support act”?

Oh and talking of singing - the song chosen for their community sing-a-long was very ill-advised. In this day and age we talk of christmastime (all one word and a small c). This is a festival which encompasses the modern capitalist idea, and allows schools and offices to close down for a week. If you start to talk or sing of Christmas, and you ask an entire audience to sing and glorify the Christ-child in a Christmas Carol entitled O Come All Ye Faithful, then you are making one massive assumption, and for those in the audience who are either atheist or of a different religion, you are making things really quite awkward for them.

So, back to the music! They played two extremely interesting pieces of classical music which I have never heard as a Brass Band arrangement before, and in both instances I heard these pieces in a very new light. It was really quite astonishing that what was once written for and played on strings, sounded so very different and took on a completely new life when played by muted trumpets. They were the Corsair Overture by Berlioz and the first half finale and my favourite piece from the evening, Respighi's March from 'I Pini Di Roma'.   I also really enjoyed their encore piece, obviously not in the programme, but it was a delightfully and rather jazzily arranged version of the Troika from Prokofiev's Lieutenant Kije Suite.   However, don't think that the programme was all classical music, most of it was, but they still managed to squeeze in a couple of brass band marches too along with some traditional Christmas music in the second half.

Listening to the band, you can easily understand why they are at the top of their game, and continue to be so year after year. Their musical talent is undeniable, and there were a couple of lovely soloists last night too - Laura Hirst on Flugelhorn playing the second movement from Rodrigo's Concierto Di Aranjuez absolutely wonderfully, and Euphonium soloist Michael Dodd playing a sublime rendition of Adam's O Holy Night. The music and the band speak (or play) for themselves. Don't lower or cheapen yourselves with gimmicks!!