Viva Blackpool proudly presents ‘The Jerseys Beats’, a show filled with classic hits starring Frankie Vali and the four seasons. This show celebrates the group that took the world by storm in the 1960s and the 1970s and have since become world renowned as one of the greatest groups of all time. Creating and producing classics such as “Big Girls Don’t Cry” and “Oh What a Night”, the group sold over 100 million albums and this is no surprise given their music is still entertaining audiences today.

The show stars Matt Andrews as Frankie Valli alongside his fellow band mates Toby Beal as Tommy DeVito, Michael Cosgrove as Bob Gaudio and Johnny O’Connor as Nick Massi to create the iconic 60’s group and their vocal talent was very transparent, especially during the acapella numbers such as “Sunday Kind Of Love”. Andrews had an impressive falsetto and this combined with O’Connor’s remarkable base created beautiful tones and pleasurable results. Cosgroves impressive solo during “Why Do Fools Fall in Love” was one of my personal highlights of the evening. The bands choreography was in keeping with the famous four seasons moves however some of it looked a little too close to ‘dad dancing’ for it to be the slick performers they were impersonating. However I could appreciate all of the vocal harmonies and the sound achieved by this modern day tribute. 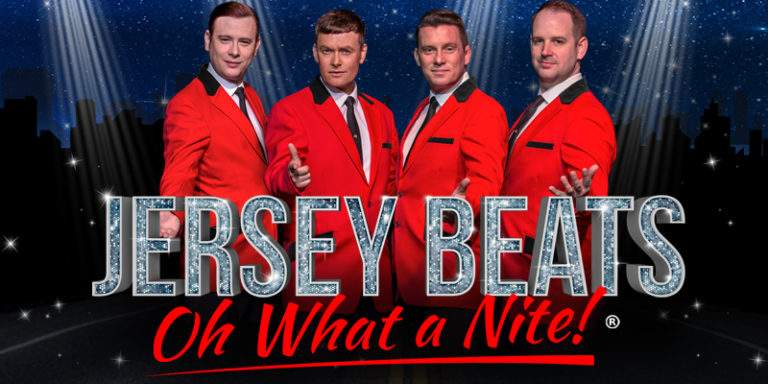 The group belted out an array of impressive numbers including “Sherry” “Grease” “Bye Bye Baby” and “Working my way back to you”. These well-known hits brought the audience to life and by the end of the first act; there were people in aisle enjoying a boogie whilst being transported back a few decades.

As well as the band, the show relied on some much needed dancing which was delivered by three Viva showgirls who brought authentic costumes and simplistic choreography which complimented the singing. The show was hosted by Leye D Johns who was wonderfully mad and had the audience in stitches with his cheesy gimmicks and one liners.

The staging of this production was simple and perhaps something that could be developed in the future. I did feel the show sometimes lacked a little bit of that vibrant liveliness, energy and excitement that makes it unforgettable. However perhaps this is just the nature of this era and it is certainly true to say that “The Jersey Beats” brought the audience back to the 60s with their undeniable sound.

Overall, the show had a little bit of a ‘cruise ship’ feel that was perhaps misplaced at the Epstein Theatre however this did not take away from the audiences’ enjoyment. “The Jersey Beats” is a true legacy to the success of Frankie Vali and The Four Seasons and the impact this band had on the music scene around the world. The performers have the original sound that you will instantly recognise so if you want a good throwback and are willing to have fun, ‘The Jersey Beats’ is certainly a great, feel-good night for fans of this celebrated pop rock music.