The Magic Of The Beatles - Theatre Royal, St Helens

The scene was set in the late 1950s, an opening soundbite that sounded like archive recordings, setting the scene and a simple but effect set, just the instruments in a black box style, with a background of twinkling starlight lights.

‘The Beatles’ arrived on stage in their iconic uniforms of plain black suit and tie and basin haircuts, setting the scene of the halcyon days of ‘Beatlemania’. The opening number was ‘She loved you’, followed by a string of their early hits, including ‘Love me do’, I want to hold your hand’, ‘All my love’, ‘Roll over Beethoven’, followed by a change of pace and lighting with ‘This boy’, all in all I counted at least ten songs in this first set.

The second set, complete with a change in costumes, saw another block of seven songs such as ‘Help!’, ‘Yellow Submarine’, ‘Ticket to Ride’ and ‘Day Tripper’. 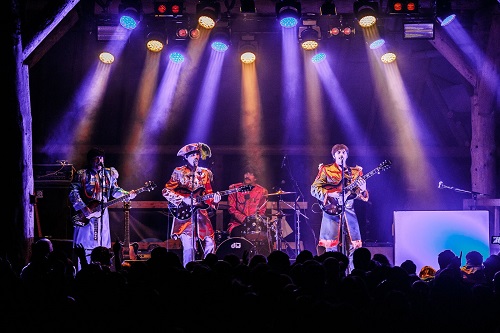 This was followed by an interval and Act two which brought two further sets of music, the first taking us to the Sergeant Pepper era and the final set followed by an encore which included another plethora of hits. In total we saw four changes of costume, each idealising the different stages in the Beatles famous musical journey, from the early suited and booted days, through to Sgt Pepper regalia, finally relaxed ‘70s attire.

Throughout the show the band played their roles to perfection, the now famed banter between both the band members and the audience, alongside the cheeky, scouse humour all adding to the believability of characters.

There was two hours of music, which was faultless, professional and polished, despite ‘Paul’ seeming to struggle with throat problems in a couple of places, this didn’t detract from the performance. The band was ‘tight’ and the individual band members are each talented musicians in their own right; it would have been nice if a programme had been available, so that credit could have been given to them, rather than the characters they played. The performers stayed in character throughout the show, they varied their costumes and hair styles for each of the four sets, but they also changes their body language, moving with the times, from the stereotypical quite repressed, legs together, head bobbing stance that we all love and recognise in with the early Beatles, through to the more relaxed and free movement of the post-psychedelic era, their attention to detail was second to none, even changing the base drum skins in synch with the era

The audience was a surprising but wonderful array of ages, from pre-teens to pensioners and everyone in between, who seemed to enjoy every second of the show, and certainly got their money’s worth, singing and swaying along and dancing in the isles. It genuinely felt more like a gig than a performance. The last three songs saw the entire stalls of the theatre on their feet, singing and dancing along. This show was advertised as a ‘Magical Mystery Tour’ and it delivered just that.