Martin Simpson reminded the audience at one point in his show at the Lowry’s Aldridge Studio that he is now officially an OAP. And at 65, he has literally a lifetime of achievement to look back upon, but he clearly isn’t finished yet: he’s working on a new album, and is continuing to bring his unique guitar style to the interpretation of an eclectic range of songs from the folk and roots tradition, and to write songs that reflect on his own experience.

There’s an authenticity about Simpson that’s apparent from the moment he wonders on stage, an unassuming figure who might be mistaken for a roadie. He began with a rendition of the old British folk standard “St James’s Hospital” which then segued into a blistering version of Dylan’s “Blind Willie McTell”, with mesmerising slide work on the guitar. As he pointed out afterwards, the Dylan song, with its reference to “the St James hotel” is a distant descendant of the folk original. These two songs set the pattern for what followed in a two part concert where the first set was organised loosely around the theme of travel, and the shorter second set offered a selection of self-penned songs, and some more-or-less contemporary covers. 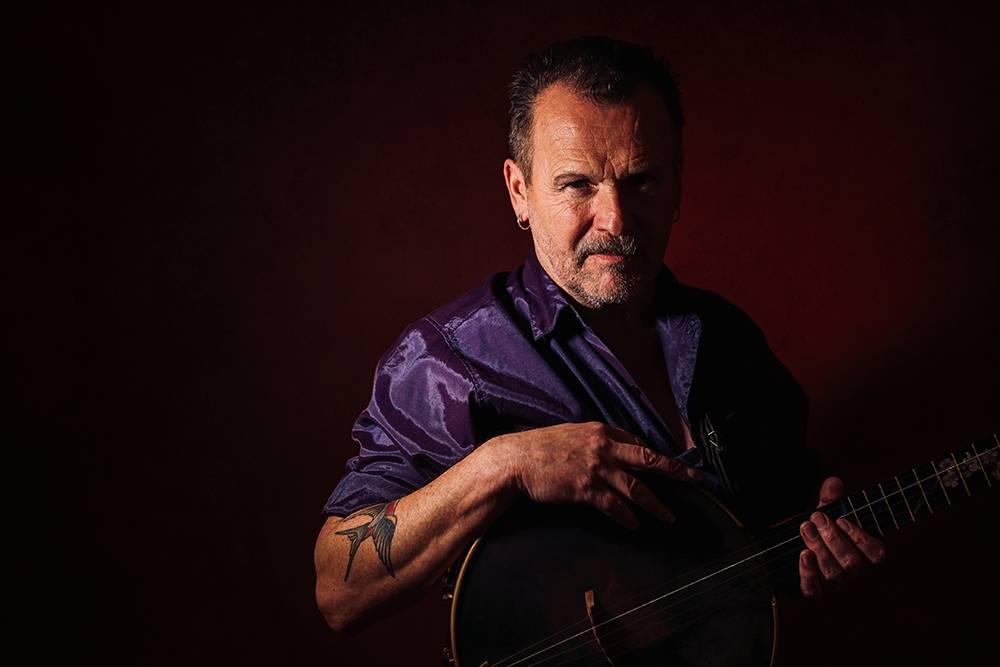 When I mentioned to a friend that I was going to see Simpson, she said “oh, I’d pay to see him tune up.” And it has to be said that tuning is a feature of a Simpson concert, to the point where he did some running re-tuning mid song at one point. It’s his insistence on getting it exactly right that causes some rather lengthy pauses between songs, and that in turn leads to often rambling introductions, which would work better in a folk-club setting rather than the admittedly quite intimate confines of the Aldridge.

The focus in any Martin Simpson concert has to be on his virtuosic finger-style playing. He has an astonishing dexterity, and surely has no peer in the broadly-defined field of folk guitar. The technique is on display in every tune, but always at the service of the song: Simpson is a maestro, but he’s not a show off. His long and varied career, including fifteen years living in the USA, has provided him with a huge back catalogue, and he chose some gems for this concert: “Palaces of Gold”, originally written in the aftermath of the Aberfan disaster, now has contemporary resonance after Grenfell Tower; the lovely Kate McGarrigle song “Talk to Me of Mendocino” felt absolutely right for Simpson’s voice; and the old folk tune of the Napoleonic wars, “Plains of Waterloo” was welcomed warmly by an appreciative audience. The range was impressive: from “Heartbreak Hotel” (again featuring excellent slide work) to a setting of Charles Causley’s poem “Katherine of Aragon” to Shel Silverstein’s strange tale of a woman sent mad by the Civil War, “In the Hills of Shiloh.”

Of course, his most successful song, about his rather feckless father, “Never Any Good” was a feature, together with a poignant companion piece about his mother, “Dancing Shoes.” A brief final set featured a switch to banjo, an instrument that seems transformed in Simpson’s hands, gaining a suppleness and complexity beyond most players.

Martin Simpson’s reputation is well-deserved, and here he showed once again that he is a guitarist and interpreter of the utmost sensitivity, a virtuoso instrumentalist with a deep connection to the folk tradition not just of Britain, but of America too. His intensity and commitment to his art, and his longevity as a performer, make him a major figure in English roots music.