As a novice to the Jazz world but a keen admirer of the art form itself, I was anxious but thrilled to be attending ‘RNCM Big Band with Clark Tracey’. The event took place in the modern and beautiful large theatre the Royal Northern College of Music and seemed to be the perfect venue for a performance of this kind. The set to the show unexpected, I was surprised to see a set for a Jazz Big Band but it surely did add an area of professionalism and also helped to tell the stories behind the music. It was beautifully designed and showed some deep thought had been put in to make it relate to the performance.

The night was introduced by Director Mike Hall who has the visible joy to be introducing the special guest and also seemed to have a tremendous passion for Jazz and also the education of the RNCM students that played part of the big band. He continued to introduce Clark Tracey who gave a small speech before starting the night with Alice in Jazz Land which was composed by his father Stan Tracey. Alice In Jazz Land was created from the Alice In Wonderland books by Lewis Carroll and many of the pieces had moments and song titles which displayed that fact. 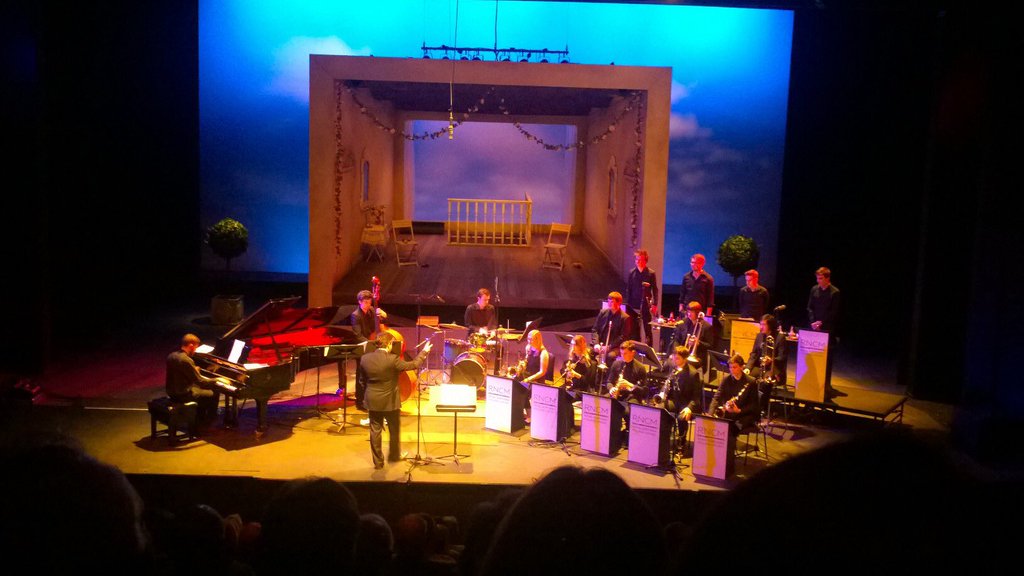 It’s really rather difficult to individually describe each piece of Jazz as most can only be heard to be understood. I will say all pieces were bursting with energy, which is mostly down to the talented students of the big band who did a terrific job of the whole show, their dedication to the craft came through immediately. A personal favourite of mine was ‘Fantasies in Bloom’ which was more of a subdued piece that seemed to carry more melody in the song and had a structure of sorts. The piano (Played by Alex Hill) was uplifting and beautiful, Hill was noted as having one of the hardest jobs of the night as Stan Tracey himself didn’t write many of the piano parts down, as this was usually the instrument he would play. Additionally, I would say ‘Murdering the Time’ was another highlight. At this point of the night, Clark Tracey began to play the drums for this piece. Murdering the Time was high energy and extremely fast, it was surprising at times that all musicians were keeping up! It was in fact reminiscent of swing dance music at times and was the perfect end to the first portion of the night.

Special Mention must be made to Thomas Plater, who did an impressive solo saxophone part in the opening number, much to the audience's delight. Another mention goes to Vykintas Civas (Saxophone) and Nick Conn (Trumpet) who also had a real great energy for the pieces, they did especially well in there solo’s. Finally to Clark Tracey himself, he seemed confident with the audience and had a real rapport with the students, much to the joy of the audience. Tracey is an excellent drummer and has toured and recorded extensively with the likes of Ronnie Scott, Pharoah Sanders, Kenny Wheeler and Billy Eckstine. He also seemed to have a great joy to bringing his father's music into music schools.

Every musician was professional and enthusiastic, a great thing to see in a Music School. All also seemed to be enjoying the music just as much as the audience were. A lovely venue for an incomparable performance, I look forward to my next visit.