For over forty years now, the Kronos Quartet have been pushing the boundaries of what’s musically possible for four classically trained string players to do. Along the way, they have covered not just the classic twentieth-century western repertoire of quartet music by such giants as Webern, Bartók and Schnittke, but have continually expanded their range to take in contemporary work, to rework rock, jazz and pop in new contexts, and to develop whole new sound palettes through a series of collaborations with artists such as Laurie Anderson, Patti Smith and Sigur Rós.

For their concert at the RNCM, this eclecticism was well represented in the programme choices, with the world premiere of a new piece by Martin Green of folk group Lau, as well as pieces written for them by Terry Riley and Mary Kouyoumdjian. The programme also strongly highlighted the quartet’s determination to encourage new music through its “Fifty for the Future” initiative, by which they are commissioning a library of works designed to guide musicians in developing and honing the skills required for the performance of 21st-century string quartet repertoire. Three of these new pieces were featured here.

The group’s instrumentation is conventional -- two violins, viola and cello – but all are amplified, and a serious mixing desk is deployed at the back of the auditorium, rock style. Working with recorded sounds as well as their instruments, which are sometimes given a fearful going over in the course of the performance, the group project a sensibility not often encountered in classical circles. The rock band feel is further enhanced by the use of a lighting rig, still an unusual sight in a classical concert. 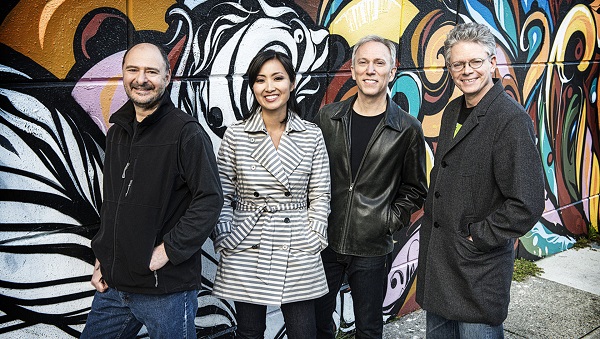 The performance started with two of the newly composed pieces, by Alexander Vrebalov and Garth Knox. Vrebalov’s “My Desert, My Rose” was dreamily atmospheric, whereas Knox’s work Satellites, from which we heard two excerpts, seemed to rely too much on plucked strings and even airily waved bows. It was followed by one of the quartet’s best-known works, Terry Riley’s “One Earth, One People, One Love” from his Sun Rings. This was marvellously solemn, highlighting the recorded voice of Alice Walker speaking the words that form the title recorded the day after the 9/11 atrocities. Another newly commissioned piece, by Malian composer Fodé Lassana Diabaté was almost traditionally conventional, and highlighted Sunny Yang’s lightness of touch on the cello. She was also featured in the Indian composer N. Rajam’s “Dadra in Raga Bhairavi” when she attached a pickup to the body of her instrument and played to make a tabla-like accompaniment to the melody.

Martin Green, known for his work with alt-folk group Lau, has written an extraordinary piece called “Seiche” which means, apparently, a standing wave oscillating in a body of water. For this, the group augmented their instrumentation with a bizarre item, invented by Green and called the Kronoscillator. Imagine one of those kids’ Slinky toys, stretched out for yards and fixed at either end to a post, on which is an electronic pick up. Two of these were hit, bashed with violin bows and plucked by hand to create a strange and mesmerising backdrop to some urgent and rhythmic playing. The first half finished with a rousing version of the old Who favourite “Baba O’Riley” which was played absolutely straight, and with flair and dynamism.

The second half featured “Groung”, based on a song by the 19th-century Armenian composer Komitas, in a version by contemporary Armenian-American Mary Kouyoumdjian. A brief, reflective piece, “Flow” by Laurie Anderson followed, and then the climactic finale was Kouyoumdjian’s “Bombs of Beirut”, part recorded oral history, part wartime soundscape, with some devastating recordings of explosions from the civil war in the Lebanon. The sound of the bombs was reverberating around the hall when the group came back for the first of a generous four encores. These final pieces once again demonstrated the breadth of their music-making. We were treated to a rendition of the sublime “The Beatitudes” by Martynov, followed by a version of the thirties blues song “Last Kind Words” originally recorded by Geeshie Wiley. Then more Americana in the shape of the old fiddle tune “Orange Blossom Special” here given an absolutely frantic treatment, and finally more sublimity with “Lux Aeterna” by Clint Mansell from the film Requiem for a Dream.

The concert was received rapturously by a pretty full house, and rightly so. The virtuosity of the players, the range, and the sense of engagement was palpable from the start. This is a group at the peak of its power, offering an immersive and challenging experience to its audience. A memorable night!