The festive period is never truly kicked off without, perhaps an advent calendar, decorations and the other tradition of attending a pantomime to indulge in shouting responses to actors’ jokes and ‘lead ons’ and admiring talented and attractive dancers and high-energy characters from a dream/fairytale land.

These days professional theatres prefer to have a star in their pantomimes and this year’s, for The Plaza Theatre and Supercinema’s Peter Pan, is third to the right, leading the Darling children to Neverland - in flight - as they follow never to grow-up Peter there after he searches for his shadow in their nursery in London - nicely set there by the selection of songs we first hear, after the overture, and the Chimneysweep attire. Along the way we meet the Lost Boys and pirates as well as Indians and ‘larger than (real) life’ Nana the Dog!

Opening with the usual panto-esque good-bad rivals Miranda the Mermaid (Classical Opera singer Shelley Anne Rivers, who has been lucky enough to play Cinderella in Doha, Qatar last year) who played the part brilliantly, versus the forgetful Captain Hook (also Mr Darling, played by John Altman, more ‘famously’ known as Eastenders’ Nasty Nick Cotton) - who proved that you occasionally have to ad lib in this style of theatre (and after 30 years it’s no surprise he is au fait with it) - it was rather difficult to understand what was being said, without the ease of rhyme usually used.

‘Princess of Panto’ Becky Bennett makes a welcome return to the theatre for her third pantomime with producer Extravaganza and she, and kids’ comedy man Bradley Thompson who also returns to the genre as Mr Smee after performing for the past two years at Liverpool’s Epstein Theatre, are the names that I would be attracted by, despite Mr Altman’s return since playing the evil Abanazar in Aladdin a few years ago.

The role of Pantomime Dame is provided by John Churnside with the introduction of Mrs Smee and he does the role justice in his timing and enthusiasm, even though he did seem to be responding to some of his own jokes sometimes because of the lack of audience engagement early on. With only a couple of ‘upbeat’ numbers in the show and parts where there is so much going on in a short space of time, the audience are bound to lose interest until a water gun or 5 appear and sweets are thrown into the crowds.

The acting was on point and the dancing, under the beady, highly-meticulous eye of an accomplished James Robinson, was perfectly in-sync and slick - impressive considering the dancers only learn the moves 3 days before the show opens! - for which their hard work should be commended and their discipline saluted. The dance numbers helped to give the show another dimension, as did the effects and set. A big qualm I have is the changes to the usual script and omission of some pretty anticipated scenes. This left both acts feeling like cliff-hangers as I expected something more after each of the end of act songs. Nonetheless, this show is very much entertaining and features some components of the panto checklist, albeit in random segments. Consistency is often missed but was not in this production (apart from one of the cloths showing an open window that shouldn’t be).

The title role is played very well by leading man Jamie Jukes, who we welcome fresh from the part of Zebulun in Joseph which he finished in July. He has charisma, as well as a slight cheekiness, and is perfect for the role. The flying is impressive and well-hidden (as are the actors sometimes because of it) and Daniel Farmer and Nathan Zammit’s John and Michael Darling are very nice indeed - sure to be high(er) flyers in future. Dancer Hannah Kiss plays the cameo of Tinkerbell well also.

The Lost Boys have clear chemistry - unsurprising when you know they are all from Wilkes Academy and share a house during the run - and this is a delight to see. They include: Samuel Hall as Slightly, reallife Blood Brothers Jacob Rodwell and Daniel Rawding as Nibbs and Tootles respectively, Joseph Pictor as Curly, as well as Georgia Apted and Tally Atherton. Equally the Pirates do also: Fraser Leigh Green as Gentleman Starkey (and Big Chief Little Panther), Keir Hylands as Cecco (and Indian Brave), Jack Walker as Jukes, Jayson Brindley as Mullins and Dance Captain Conall Hesketh as Noodles. Poppy Stribley plays Tigerlily with a seemingly authentic accent and Lottie Blanchard and Mollie Hatt add to the dancing.  The live band is led by Andrew Saunders.

Overall, an entertaining show that was a great first night, enjoyed by all of the audience - sadly not a full one - in a beautifully welcoming and inspirational venue. I always look forward to returning and contributing to the success of the annual pantomime that does so much to maintain the theatre as a pillar of the community and escape from the wild world in which we live. Please go along to Extravaganza’s latest offering and help keep this institution alive.

Peter Pan runs until Sunday 8th January and tickets can be booked at www.stockportplaza.co.uk or at the box office. 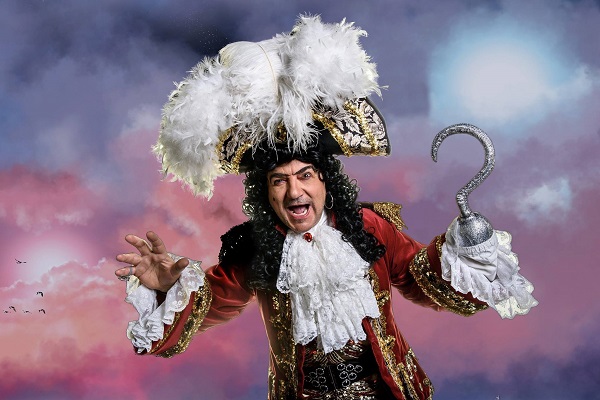