If there’s one theatrical period the people of Stoke love its panto. Every theatre in the city is buzzing with the Christmas spirt and this magical tradition brings people of all ages to the theatre. The bright lights, the dazzling costumes and at the heart of this magic is the Regent Theatre who this year brought the heart-warming fairytale of Cinderella to life.

The theatre was packed out last night to see the Cinderella. The atmosphere even before the show was electric, the use of Christmas music really brightened the mood before the show. Loads of little girls donned the sky blue ball gown just making adding to the magic of it all.

The big names of show are Johnathon Wilkes a local lad who hit the big time. He’s presented various TV programmes and headlined many a west end tour. This is his 11th Panto in Stoke and even still the audience can’t enough of him he is always spectacular on the stage and this year is no exception. He took on the role of Buttons this year along with directing. Well this Stokiefella hits all the right buttons with this performance.

His partner in panto is the exceptionally wonderful Christian Patterson. The writer director and ugly sister is a class above, he and Simon Nehan who played Beyoncé and Rihanna are outstanding and hilarious. The pair were the perfect gruesome twosome. Their costumes just got better and better throughout the show. The best and most memorable scenes in the show came from these two and Wilkes. They had the audience in the palm of their hands and rightly so. Year after year Wilkes and Patterson keeping better and the addition of Nehan this time has just hit all the right notes. The classic busy bee scene couldn’t have been any funnier if it had tried. I’d say it knocked my socks off but to keep in with the slight accident that happened last night I’ll say I take my hat off to the cast for this scene.

Finley Guy takes on the role of Cinderella and plays it with every inch of sparkle needed. Her vocals were lovely and she played the role with a likeable charm. She and her Prince Charming were completely adorable together. Finley’s transformation scene was so beautifully set and executed that I had tears in my eyes. At 22 I had actual tears in my eyes as I watched true magic come to life on that stage last night. I can only dream of how in awe the children would have been.

My favourite performance of the entire night came from Ian Stroughair. His Dandini was impeccable he is so completely fabulous. I was in awe of his every moment on that stage. Also he comes across as the kind of person you really want to be best friends with. He had comic timing and incredible voice and was the perfect panto package. Regent please try and bring him back for next year your cast this year have excelled any I’ve seen before and I’ve been coming since I was tiny.

The script by Patterson really packs a punch, it’s full of wit, gag after gag and just is an all-round marvel of a script. The chorus were marvellous and when they graced the stage they owned it. The songs and choreography were insanely fast paced and kept the audience smiling and provided some quality sing along material both old and young. The costumes were in a word magnificent a particular stand out was Cinderella’s Ball gown it caught the light stunning and made her look every inch a princess. It’s packed full of audience participation and just good wholesome family fun.

This panto is not to be missed if you want a fun filled family show with lots of heart, lots of smiles and lots of laughter the Regent theatre is the place to be this festive season. So much so that I’m looking to go again before the run is over. http://www.atgtickets.com/shows/cinderella/regent-theatre/ 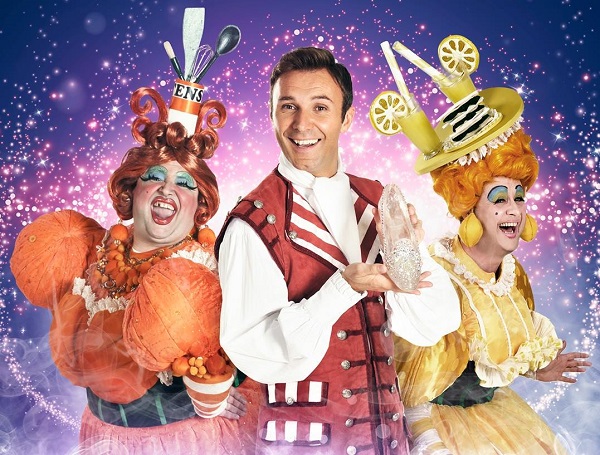