And with dazzling costumes, silly jokes and the usual pantomime banter, this is traditional fayre indeed!

However, Barton Theatre Company have taken the story and very cleverly made a couple of interesting and wonderful twists to the one we all know. I really loved the idea of Cinderella having the second slipper to hand when her stepmother threw the first away; and the idea of having a Fairy Godmother School and a young ditsy novice wanting to modernise things was pure genius! The Father Christmas idea however worked less well, and am not sure if that just wouldn't confuse the very young audience members more.

The show starts with the Fairy Grandmother sitting to the side of the stage and, acting as narrator in between scenes, relates the story in traditional verse. Her husband Nicholas appears briefly and then the play proper begins.

The set is minimalistic. A couple of flats with painted forest and interior served for majority of the show, but when they opened the tabs at the back to reveal the pumpkin carriage... that was a pleasant surprise indeed. Where the set was lacking, the costumes made up for in abundance. Plenty of colourful changes and fabulous outrageous wigs in traditional panto style! 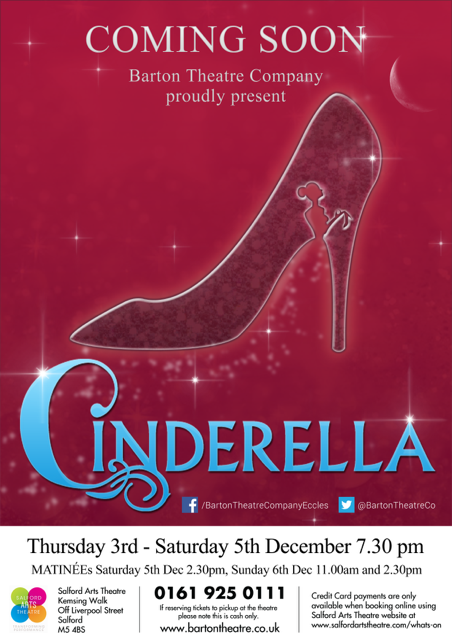 I keep using this word, traditional don't I? Well, that's because it was in every way exactly what a pantomime should be. The only things lacking were a chorus of dancers and the walk into the audience to chose a couple of youngsters to go up on stage and get a present. Otherwise, this production ticked all the boxes for what true family pantomime represents.

Cinderella herself, played by Kayleigh Hill, looked perfect, and acted well against the force of the strong and relentless torments of three nasties. Her ugly sisters Viscose and Polyester [more could have been made of their names ] played by Elly Hayton and Anzie Weschke, and her wicked stepmother Drag Queen, Botoxia, played with relish by Brian Cogswell. Tom Mclaughlin found much comedy in his role of the put-upon Baron 'Elvis' Hardup.

The two Fairy Godmothers, Violet, the traditional fairy (Natalie Poole) and the younger more 'crazy' moderniser rebel Thistle, played by Rhiannon Williams. This could have been the funniest and most crowd-pleasing character in the show, and Williams worked well with what she had, but the script and lack of imaginative directing not allowing her to fully open her fledgling wings.

Dandini (Mags Ridings) and Prince Charming (Ben O'Brien) well chosen, matching each other well. Much more comedy could have been gained though from the two soldiers. What they did, they did well, but their routines could have been developed a lot further. They were played by Andrew Nevill and Eric Atkinson.

In fact, that brings me nicely on to my overall impression of the show. There were many really nice ideas, songs (a nice mix of both modern and traditional), and routines, but none of them seemed complete or fully developed. Songs cut off half-way through, comedy routines unfinished and a great storyline plot idea left in mid-air. All of this diminishing what could well have been a great show.