If you are looking for a fun packed panto with wonderful characters, plenty of humour and enough cheese to open a deli then the Wirral is the place to be. Sleeping Beauty at the Floral Pavilion, New Brighton is like a breath of fresh air to pantomimes.

The panto is brought to us by the Floral Pavilion and Martin Dodd for UK productions. UK productions was formed in 1995 to produce musicals and pantomimes, for which they are now one of the country's most prolific producers.

The buzz in the theatre was electric with the sound of children all excited to see what was coming over the next 2 and a half hour. The answer was simple, laughter, up to date songs, a brilliant cast and wonderful lighting to make the evening magical.

Sleeping Beauty is about a beautiful princess who has a terrible curse set on her by the evil Carabosse that she will prick her finger on her 18th birthday and will sleep for 100 years. But who can save her? Will it be the Good Fairy? Silly Billy? The handsome Prince? They say only true love's kiss can break the spell...

The Good and the Evil are played by Sarah Jane Buckley and Vicky Entwistle respectively. Both of these ladies are extremely good actors and have very powerful voices. Entwistle as Evil Carabosse played the role perfectly, having children and adults alike booing each time she entered or left the stage. 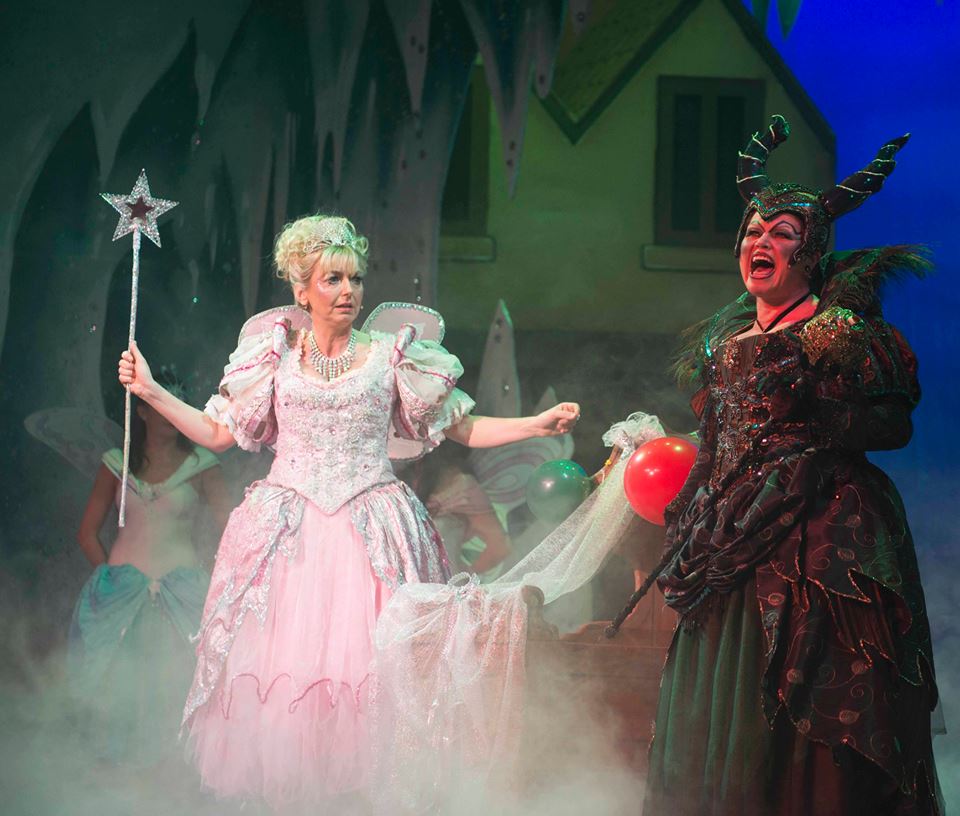 Charles Burden played the wonderful Nanny Glucose and had the audience in stitches with the fantastic tongue in cheek jokes and a costume change every time the character entered the stage.

Richard Meek played Prince Philip in a very Gaston from Beauty and the Beast way. Although he had a good voice and delivered the lines well, I felt like the character needed a bit more energy and power. At times it felt like Meek was being overshadowed by the others on stage and I felt he needed to demand more power in the role.

The standout of the show came in the role of Silly Billy played by Adam Moss. His comic timing was second to none. From the minute Moss entered the stage until the end of the show his energy was nothing short of 100%. With hilarious ad libs, great audience interaction, fantastic camaraderie with his fellow actors on stage, I could watch him all day long. The way Moss and Burden worked effortlessly together gave this wonderful panto a great heart.

A great stand out part of the show was when Sleeping Beauty first met Prince Philip and they sang ‘Somebody to Love’. The song sounded fantastic but it was the rest of the cast behind a gauze appearing occasionally in spot lights in different positions that made it a highlight for me.

Speaking of lighting, I must mention Joe Dowling who a top notched job of lighting this show. It was perfect in every way, from the smallest of spotlights to turning the stage into half good half bad, it was wonderful to witness.

The set and scenery, managed by Daniel Stephenson, was fantastic and the transitions between scenes were slick and seemed effortless.

The costumes and wigs headed by Elizabeth Dennis and Charlie Oswin were phenomenal. Top quality and really added a regal style to the show.

Direction by Andrew Margerison was led with great comic timing and with the hearts of the young forefront in mind.  Choreography by Lee Lomas was imaginative and very current and delivered to a magnificently high standard by the 6 lead dancers. The junior chorus were provided by the Liverpool theatre school who all did a wonderful job and gave all they had through the whole performance.

We had a small orchestra with just 3, Steve Allan Jones, Adam Behrens and Jonny Christie. They may have been small in numbers but definitely not small in sound or quality,

The sound of the whole show was fantastic and I left feeling 9 years old again after having an evening of fun and frolics of a great panto which had all the ingredients of an old fashioned panto but had been cleverly transported into 2015.

Running until 3rd January 2016, if you get the chance, grab a ticket before it is too late! http://www.floralpavilion.com/