OK, before I review this show there are two issues which I wish to tackle first. Both are pertinent to this particular production, hence my writing them here - but they have also been present at other shows too, and quite frankly I am both annoyed and disappointed by both.

1) I find the lack of a programme utterly incredulous! Why on Earth would any company not wish to advertise the production or give relevant credit to the people responsible? It is something of an essential item for any company, whether the smallest church-based Amateur group or a West End Musical, there MUST be a programme of some description, even if it is only an A5 sheet of paper with a list of names!! A programme is an absolute necessity not an optional luxury!!

2) Will all theatres and producers PLEASE, if you are selling merchandise that includes luminous swords, wands and goodness knows what else, make an announcements to make sure they do not have them lit in the darkened auditorium during the performance! This not only shows a complete lack of respect for the performers and their craft, but also teaches the children incorrect theatre etiquette for when they get older. I know that in the main this responsibility should be down to the parent or guardian, but also, in the main, said parent or guardian are usually quite incapable of properly disciplining their children anyway, and don't understand the etiquette of being an audience member themselves! {Hence the need to keep endlessly reminding them to switch off phones, don't take photos, etc!!}

OK, rant over - now to the pantomime!

The production in question was Jack and the Beanstalk presented by an unknown company (no programme!) at The Civic Centre in Heywood. I saw it towards the end of its run, having now only 4 more performances left, so what I saw should have been a finished product, but what I actually saw was a show that took a little time to warm up, and was somewhat rough around the edges.

It was not all bad - no not by any means. In fact there were some very good moments in there. The problem was that the good moments were just that - moments; in an otherwise mediocre offering.

The problem with this stems first of all from the writing. The story being told in the main by the fairy and all in verse, it was more or less taken for granted that the parts of the story which were left untold were implicitly understood by the audience. Further, those things which were narrated by the fairy, were rarely actually acted out so that trying to keep up with the story, if you are a three year old (and this show is advertised as being suitable for three years upwards) would have been impossible!

I have said this before and I will say this again; TELL THE STORY!! And make it appropriate for your target audience!

Following on from this, then the director (unknown) needs to take some of the slack too. He set the pace of the show too fast and gave the audience no breathing space to take in what had just happened. Too much time was spent on joke routines and songs and not enough time working with the audience or telling the story. One thing I am also quite against is having a Father Christmas in a pantomime. This is now the third time I have seen this happen, and it is something I would definitely veto. Even if it is made clear that he is not the 'real' Father Christmas, it is still not advisable, and he doesn't appear in any of the fairy stories, so why add him. Here he was an extraneous and dispensable character that was in a short scene which should have been cut and the 'notices' done during the song sheet.

For both of you I would say, be careful - very careful - when bringing sex and sexual innuendo into a panto. If it will definitely go above the children's heads, then a very small amount of this is fine and acceptable. However I am really not certain that the King wiggling his bum (no matter how amusing that actually might have been) and singing, 'I'm Sexy And I Know It' was a good idea; and certainly having the Dame put a very large key between her legs and turn round to show what was obviously meant to look like a huge erection was a complete no-no!! 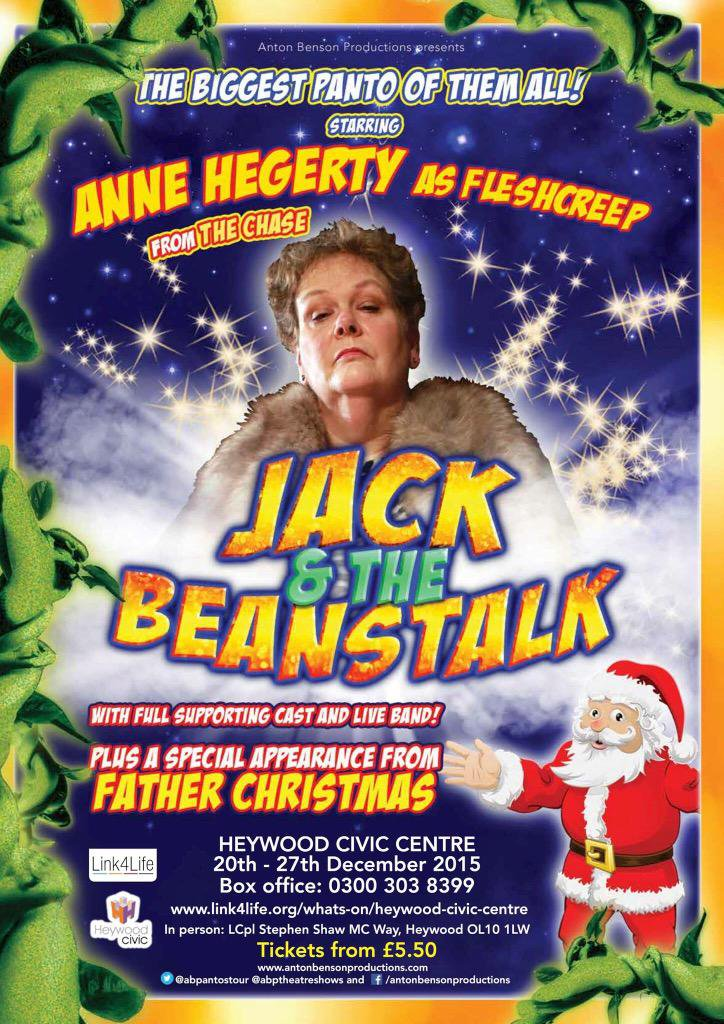 Also, whilst I am speaking about the direction (or maybe even choreography - again, unknown, or maybe even the Musical Director, who I do know was Rob Wilkinson), then the "If I Weren't In Pantomime" song was extremely poorly executed. The whole point of the song being that your actions when done as a machine in unison make very near misses or funny visual situations which the audience can enjoy, and then the final one to join will actually get hit. No-one could see the visuals in this, and it was much too fast! The Chocolate Bar Pun Routine was a good idea, and was funny for the first 5 or so bars. After that it was excruciatingly long-winded and boring, despite the lovely puns! And the 12 Days of Christmas song was simply atrocious!! Not only was it too long, but it was just the messiest, silliest and most pointless routine I have seen, ever. Full stop. Once the three balls had been thrown into the audience you might as well have gone home. No-one was listening or interested in you anymore, they wanted only to play with the balls. Therefore the toilet paper, the balloons, the can-can dancers, and even the water pistol were utterly pointless!

Now to the acting. Fairy Beansprout was played by Eva McKenna, and her interpretation of the traditional role was really quite refreshing. Mostly the fairy role is played in RP and is the most beautiful and perfect creation imaginable. Either that, or it is taken to the extreme and played as a dumb (stupid) and rather ragged thing. Few can or do find a middle ground with this role, and Ms. McKenna did manage to find quite a nice and acceptable solution to this being just a little ditsy and common but keeping her composure nevertheless, and still being in many ways quite traditional. I rather enjoyed her interpretation and performance. Playing opposite her in the good / evil stakes was Anne Hegarty in the role of Flesh Creep. Ms. Hegarty is better known as one of the eggheads the contestants must try to beat in the ITV show, 'The Chase', in which she has a rather austere and domineering persona. Appearing this afternoon however she was eminently likeable from the start. Little or no attempt was made by her to be evil, despite the lines she was given to say. Mind you, the ridiculous costume she had been given did not help. A set of Viking-like horns on her headgear and a glittery gold and brown one piece dress did nothing to indicate evil. To her credit, she did seem to realise that pantomime wasn't really her forte, and did play rather tongue-in-cheek at times, and she did warm up considerably after she appeared as a West Country farmer to buy the cow from Jack.

Jack Trott {Ben Sherlock} was quite likeable and good. If he were to only slow down a little, and smile a little more - he had a rather unerring frown when chatting to the children, which was a little odd - he would have been very good indeed.

His mother, the Dame Trott {Simon Naylor} was obviously having fun, and was relishing his time as a dame. Poorly costumed and with hardly any make-up he was most definitely male, and made no attempt to make the audience think differently. Certainly one of the more butch dames I have seen this season, but it worked for him certainly and he did have a nice rapport with both other cast members and the audience.

The King of Giddyup (?) was played by Nathan Smith, and with his fine deep sonorous tones made some lovely vocal play with his dialogue. On his first entrance though I felt sure he was acting an old man (badly), and then on further entrances he was really quite young and agile. I didn't understand that at all! He was suitably 'giddy' but am thinking that just a little more fun could have been gained from the 'giddiness'.

Finally the cast could not be complete without a princess, and she was played in this production by Kate Martin. What a refreshing idea, a great idea in fact; to have a Princess who is streetwise, down and with -it with the kids. A bit naughty and a bit of a rebel. But this interpretation of the role simply went at complete odds to the visuals! No attempt was made to make her look like a rebel in any way either through hairstyle, make-up, or costume. She was far too traditionally pretty, and so no matter how good her characterisation was, it fell somewhat flat sadly.

The cast were joined by members of a local Dancing School, and considering they are training to be dancers their routines were really very tame. They did smile and add to the ambience though. But they lacked proper costumes. Everything they wore on stage I wouldn't mind betting, were things that they use already in either dance classes or performances. Mostly leotards, training skirts and tutus, and they all simply looked wrong! Appropriate costumes in keeping with the panto were necessary.

Both the set [nothing more than a set of backcloths] and the lighting [poor and insufficient] did nothing to help either the quality or the pizzazz. The inflatable beanstalk was passable, just, and the part where the King and Dame nail a poster to the wall was offstage and unlit.

There were some things I did like though. 1) The Giant's head was good 2) I Shall Scream was good, 3) Fairy's Song, Sometimes You Have To Be A Little Bit Naughty was good, 4) The Tragedy Dance with the Dame and King was good - pity about the dancers behind... couldn't they have been better placed so that the smaller ones were at the front??, 5) The Scary Ghost routine worked especially well, and I loved the little touch of the fairy wanting to be part of it, but being ushered off stage., and 6) The ending - after the bows - was really nice. A little bit of rhyme from the fairy to end the show, and then a full chorus Happy Holidays complete with fireworks. That was lovely. But, and there is always a 'but' with me! why wasn't there any choreography to the final Merry Christmas song??!!