Torvill and Dean Set to Make Pantomime Debut in Manchester

Britain’s most beloved sporting heroes bring their unique talents to the Opera House for the first time ever and will be wowing audiences with their amazing routines.

Jayne Torvill says ‘This will be our first ever pantomime and something we’ve been wanting to do for some time. We’re already working on some brand new choreography which we hope will bring a whole lot more excitement to the wonderful Cinderella story and reworking some old favourites too’

The Sarajevo 1984 Winter Olympics saw Torvill and Dean shoot to international fame as the pair became the highest scoring figure skaters of all time after skating to Ravel's Bolero, creating one of the most memorable sporting and entertainment moments and earning them a gold medal. Torvill and Dean continued to skate together for a further 14 years winning numerous professional and amateur competitions. Following their professional skating retirement in 1998 the pair embarked on a number of other projects including choreographing for English National Ballet, touring with Stars on Ice and producing ice shows such as Ice Adventures at Wembley, whilst also continuing to choreograph for other dancers.

From 2006 to 2014 Torvill and Dean became prime time TV favourites as coaches, choreographers and performers in ITV's Dancing on Ice also taking the show on the road in their national UK tours. In 2014, Torvill and Dean returned to Sarajevo to dance the Bolero one more time, celebrating the 30 year anniversary of their Olympics performance. Their name remains synonymous with Ravel’s masterpiece to date!

With more star cast to be announced, the classic rags to riches tale Cinderella will be transformed into a breath-taking family extravaganza with glittering sets, gorgeous costumes, big song and dance numbers, bags of audience participation, real Shetland ponies and jaw-dropping skating sequences.

So get your skates on and book your tickets now for the best panto in town! www.atgtickets.com/manchester or call 0844 8713018 (bkg fees apply) 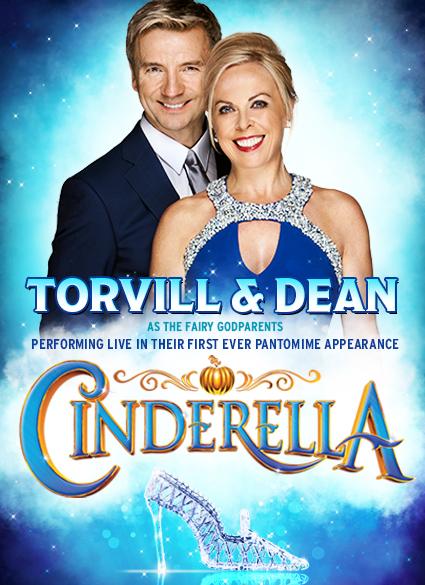