Gold, Gods and Giants is loosely based on Wagner’s magical, mythical Ring Cycle and is an opportunity to experience a superb mix of storytelling and music in a unique and intimate space.

Dominating the centre of the stunning compass room of the Lowry, that was decorated with fairy lights draped from the ceiling and a star lit floor, stood the majestically story telling tent.

I love seeing theatre in new and exciting spaces and this afternoon’s performance ticked all the boxes for 45 minutes of spectacular children’s entertainment. Cushioned floors and soft fabric pillows, alongside the beautifully lit tent (or mini marquee as I would describe it) gave a lovely magical feel for today’s venue for the very young audience. The show was aimed at 4-7 years old but as a 47 year old mum I enjoyed it just as much as the little ones.

Sylvia, as she was introduced, played a variety or unique instruments from all parts of the world, sadly I can’t name them but the sounds complimented the story spectacularly. Giving the whole experience a depth and excitement that only such a talented musician can do. 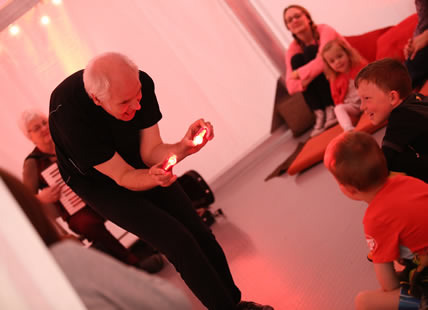 Anthony was the story teller, and with the use of imagination, audience participation and some stunning character changes, by simply changing his voice or body language, took us through the mythical story. Starting with the tale of Brunnhilde the daughter of Valyries the God of the Skies and the Goddess of the Earth who had been put into an enchanted sleep surrounded by a ring of fire after defying her father. Brunnhilde had tried to save a hero that should have died in battle as she felt it was unfair if he died as he loved his baby and wife so much. Her father angered by this changing the course of destiny, bolting to earth breaking the hero’s sword and ensuring his death.

Brunnhilde still wanted to make good for the hero’s family following his slaughter so she sent them in to hiding to the woods with the hero’s broken sword.

Brunnhilde was then punished, ostracised and sentenced to an eternal sleep only to be awoken by a kiss on the lips of a hero who knows no fear. As with all mythology and worthy stories, good needs to conquer evil and with twists of treachery and lies the story unfolds for the young Siegfried (the now grown son of the previous slayed hero) to conquer the dragon, get the gold and of course find the lady in need of the kiss.

This performance was so stripped back from the usual visual overload on the theatre stages of today, where young children can sit back and passively watch the tale. Whereas true storytelling relying solely on the imaginations of the young audience, the stories are created in their own world of imagination and it is truly mesmerising to see. My three year old companion was so enthralled and engaged in the story opposed to the usual sweet eating, fidgety watching, of other stage shows, I was genuinely impressed at the talent of Anthony our story teller as he entranced each and every member of the audience keeping them fully engaged and interacting. The dragon scene with the use of two red lights was brilliant my little one believed whole heartedly that the dragon was real, a true testimony of a brilliant storyteller.

A wonderful opportunity to see storytelling at its best in a magical and intimate space that was so very different to the big stage productions. This cast and show continues to tour the UK and if you do get the chance to take your little one I am certain you won’t regret it. Don’t be put off by the complexity that mythology usually brings as this story is stripped back and kept as believable and relatable as possible to ensure the little ones follow it. A great show and two very talented and experienced performers.