A Bed Of Shards - The Lowry Theatre, Salford

For the past 14 years they have lived together in a Council flat which is now being knocked-down for redevelopment and so are being re-housed in a bungalow ("is it on ground level?") in a cul-de-sac in Little Hulton. Boxes are everywhere, and fill the stage, even hanging from the ceiling. The only two things not boxed already being a comfy armchair and a small table.

Both Little Hulton and the other place mentioned in the script, Ordsall, are in Greater Manchester, and so I really don't think the broad Yorkshire accent of Button was perhaps right. Admittedly people do move and there is absolutely no reason why she shouldn't have been from Yorkshire, I think just as a personal preference, a more local accent would have worked better. 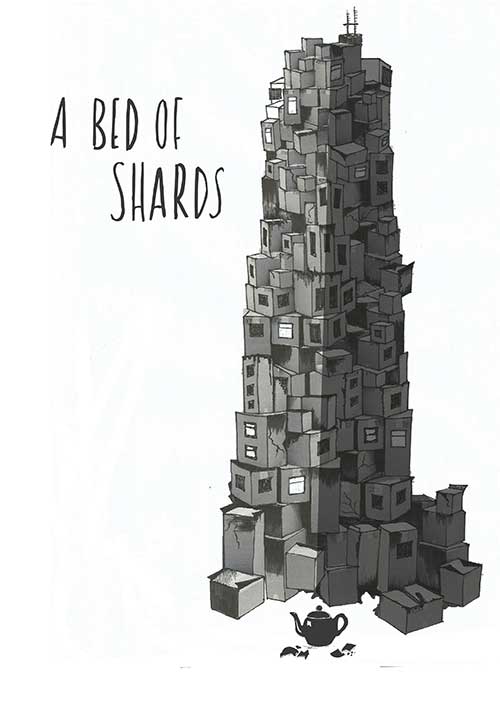 The play follows the domestic life of these two as they prepare to leave this home and reminisce (over a collection of teapots) and plan for the future. Ronnie (as Veronica is affectionately known) is the optimistic one, looking forward to the move and the new challenges and opportunities it affords, whilst Button, who hasn't left the flat in the past 14 years, sees things rather differently and is insanely jealous of Ronnie being able to leave the house and have a life outside of the four walls.

"Is it wrong to want a bit of colour in my life?"

It is unclear what Button suffers from. She quite clearly doesn't really have any mobility issues, since she is seen walking without the aid of a stick with two mugs in her hands, and yet there is talk of a disabled ramp up to the front door and the need for a mobility scooter if she decides to go out. She is clearly able to manipulate her hands and feet unaided, and yet she is shown to be washed with a flannel by Ronnie, and so the visuals are seemingly at odds with the writing. Further, she takes several pills a day from a blister-pack and we are told that these are blood pressure, heart, cholesterol, statins etc, and yet she still manages to eat greasy and fat-laden foods, which again seems odd. It may be that Button is suffering from the early stages of some dementia which would explain the unprovoked violence and mood swings, as well as her wheedling to bring back Ronnie to look after her. But again, this is not made clear.

What is clear however is that these two actresses portray flawed and real people and although it is very difficult to perhaps like either, especially Button, they are very believable and show great depths of emotion and compassion between them. There is genuine tenderness in the ending.

Directed by Ian Townsend, the play starts well but has little variation in pace and so I found that despite the quality acting, it was starting to drag just a little. That is until Button becomes angry, nasty and violent towards Ronnie. However, this came somewhat out of the blue and there was little or no provocation and build -up for this. I recognised a great deal of Button's characteristics as being present in my mum, whom I care for and does have dementia, and the mood swings and violence are symptomatic of most dementias, but since we were given no hint or indication of this beforehand it didn't feel right here.

The only other slight concern I had with the directing was the moment when Ronnie started taking out the rubbish. Walking round the front of the table when quite clearly it would have been quicker and easier to go behind the table just didn't make sense.

I do feel though that even though McNulty has already lengthened this from a short 15 minute play originally written for JB Shorts, there is still much more we can learn and gain from getting to know these two characters more. Maybe an Act 2 sees them settling in to their bungalow, and we learn more about Button's condition.