The Peony Pavillion - The Lowry, Salford

As one approached the theatre this evening the throbbing repeated sound of a drum beat was heard, and as I got closer I was able to watch two Chinese Dragons dancing to a Chinese drum rhythm outside the theatre welcoming guests and entertaining passers-by. This was delightful and so unexpected, but a wonderful idea and really put one in the right frame of mind.

To further enhance the high spirits and well-being, A5 sized full colour programmes were being given to the audience FREE! They were asked to hand them back to be re-used or recycled if they did not with to keep them too. In this day and age of Capitalist greed and highly priced theatre tickets, this was also a most pleasant and welcomed surprise.

Someone has gone to great lengths to get the marketing right for this - and succeeded! 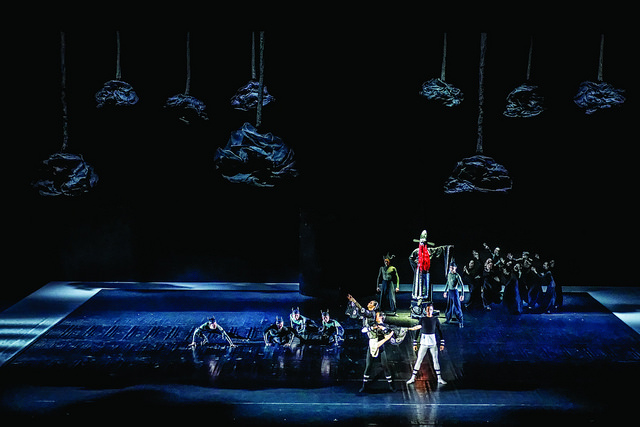 The third thing to impress, even before entering the auditorium was the actual title of the ballet. The story is an old and traditional one - dating back to 1598 and a long-forgotten China; and therefore to use the archaic spelling of pavilion ('pavillion') was also for those of us interested in linguistics, another master touch.

The Augers indeed were good, and expectations were high. Did the National Ballet of China manage to meet expectations? No, they didn't - they exceeded them, and by a long way!

The National Ballet of China, last seen in the UK in 2011 in Edinburgh, have been renowned for their somewhat revolutionary ballets, with their staple diet of ballets such as 'The Red Detachment Of Women' or 'The White Haired Girl', but this ballet, 'The Peony Pavillion' takes us back to a time before Communism and a time when fantasy and reality were much more inextricably linked than they are today. This ballet serves to preserve China's artistic and cultural heritage.

The story, although quite complicated and lengthy, has been adapted and shortened for the purposes of this ballet, and tells of a young rich girl who dreams of true love. As she dreams two alter-egos join her and guide her through the dream. In the dream she meets Liung Mengmei, her one true love. She awakens from the dream to find that her lover is no longer near. She longs to be with him again, and so asks her alter ego to take her back to the dream. As she returns to the dream Death comes along, and she is left wondering what is real and what is not, until eventually Death takes her and she dies of love. Mengmei is overwrought and cannot let go of his love for her, and so in a fantastical twist of fate, just as she dies for love, she is returned to life again due to their true love of each other, and of course, as all good fairy stories must have a happy ending, Death and his entourage come to the wedding of the couple and both mortals and afterlifers dance together and rejoice. 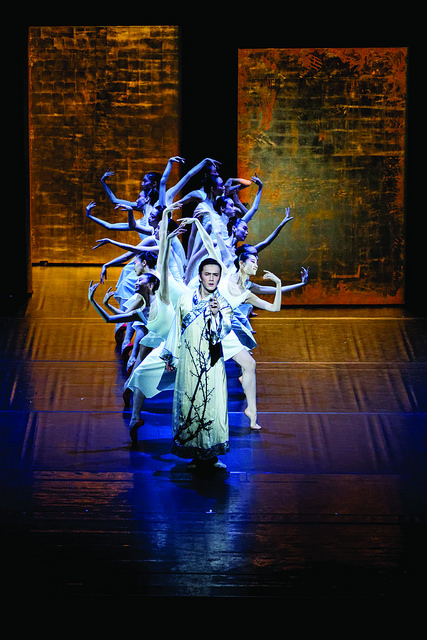 The one thing which impressed me more than anything this evening was the wonderful, imaginative and indelible way Western and eastern culture had been fused. The costuming was beautiful, and such attention to detail, and all looked utterly authentic; the company used a famous traditional Chinese Opera singer Jia Pengfei ( Kunqu Opera) to play the part of one of the protagonist's alter ego's Kunqu Liniang, and as she glided across the stage, she sang ancient Chinese operatic text throughout the ballet, giving it an otherworldly feel, and placing the action so succinctly in Ancient China; the music and choreography were both a wonderful compromise. Musically the ballet utilised in the main many Western European light classical pieces of music, from Debussy, Ravel, Respighi, Holst and Prokofiev, but they also linked these pieces very cleverly with authentic sounding traditional Chinese music, and this was superbly done. Credit to composer Guo Wenjing. Likewise with the choreography. Majority of the dancing was of the traditional western ballet techniques that are familiar to us, and yet, there was also much in there that was unique to China, and their dances. Incredibly the joins between the two were completely seamless, and I witnessed some of the most technically perfect and beautifully imagined corps de ballet choreography I have ever seen, thanks to Fei Bo.

This production was also one of contrasts, stark contrasts. the colours of each costume had been thought about long and hard, as indeed had the lighting design, the images created by these two elements together were again amongst the most startling I have thus witnessed. Credit here to costume designer Emi Wada and lighting designers Michale Simon and Han Jiang.

The one thing which failed to impress me was actually the set. (Michael Simon). I had and am still having difficulty trying to understand why, when dealing with an ancient Chinese traditional story, with a company that has gone to extraordinary lengths to reproduce authenticity in so many other areas, we were left with a minimalist, avant garde, non-realistic set. This jarred and did not fuse at all with all the other elements present within the production.

However, back to the dancing - which was incredible. In this performance the lead role of young rich girl Du Liniang was danced with beauty and precision by Zhu Yang; the young man she falls in love with, Liu Mengmei, danced with passion by Ma Xiaodong; Liniang's Flower Goddess alter ego was the beautiful, elegant dancer, Zhang Jin with a cast of seemingly thousands. One of the largest ensembles I have seen, and their technical precision and utter beauty was breathtaking.

A beautiful ballet, brought spectacularly to life by a hugely talented group of creatives and artistes. A must-see for anyone interested in either dancing or Chinese culture.