Black Ice tells the story of the Harrison brothers; Bill (Stuart Reeve) and Jonathan (Andy Pilkington) and their upbringing. From the very beginning we see that there is tension between the siblings and clearly there is some unfinished business between them.

As with all of Vertigo’s shows the production value is high, however I did think that there were slightly too many props on stage. There clearly was a lot of attention to detail borne in mind when dressing the set, however sometimes less is more as there were times when the stage looked a bit busy, especially when all seven members of cast were on stage at the same time.

The production is set in the Harrison brothers parent’s house on Christmas Day. The parents have recently passed away, leaving the house to the brothers. Bill wants to spend one happy Christmas there with his family. As the play progresses we learn that the house holds memories for the brothers that they’d rather forget.

As with any drama there are a number of twists and turns in the plot to keep the audience in suspense. However, I was a little confused about the relationship between Bill and his son; Danny (Richard Allen). Bill is very frosty towards him at the beginning of the play, it was touched on that Danny was a bit of a will child and got caught on the wrong side of the law. However, I do think that could have been delved into further, as I don’t feel it added anything to the overall plot.

When the family sit down to Christmas dinner all the tension that’s been bubbling underneath comes to the surface and the secrets about the Harrison brothers past are revealed. In typical kitchen-sink drama style glasses are smashed, fists are drawn and tears are shed.

Once again Allen showcases his talents as an actor, while Joe Slack (Gregory) and Ryan Clarke (Callum) put in fine performances on their debut production with Vertigo. It was also nice to see some of the Vertigo regulars in more dramatic roles.

While Black Ice is very dramatic, there are some rather humorous moments in the production, which are needed to lighten the tone when things become very dark. In the end the family find the humour in their twisted lives too.

The problem Vertigo Productions have is that because they have produced some the best fringe theatre in recent years, expectations from them are massive. While Black Ice does deliver and certainly is better than most other fringe productions, I can’t help but feel some of the Vertigo magic was missing tonight. 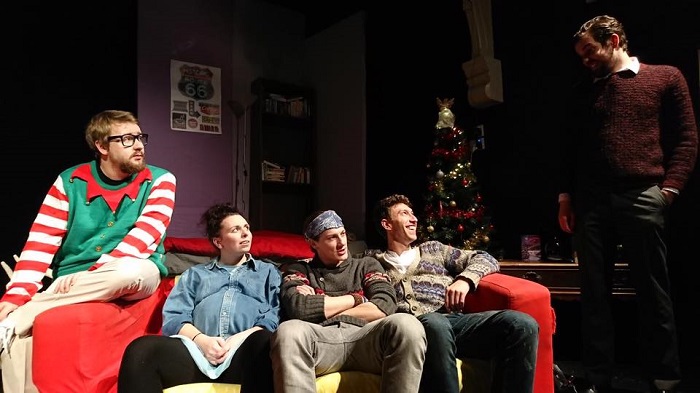