Ginger is the New Black - The Lowry, Salford

After his sell out performance at last year’s Edinburgh Fringe, James Wilson-Taylor continues his campaign to bring ‘Justice for Gingers’ and debunk the myths that have been a plague on the red haired community. In the first five minutes of James’s performance in which the comedian swaggers in, dressed as Ed Sheeran and hilariously destroys the popstar by breaking into song about Sheeran’s recycled lyricism about drinking and ‘dating 18 year old girls with heavy class A drug addiction’.

The energetic comedian engages the audience on the subject by taking them of a comedic journey on how gingers have been treated unfairly as citizens. From being marked as vampires in ancient Greece, the repeated name calling in the school playground to false idols that represent them, Trump included. Taylor uses his own personal experiences, from being attacked by an internet troll on his Facebook page named, Laura. To being cast as Simba in an illegal stage adaptation of the hit musical, Lion King because he was the only cast member who had the same hair colour as the protagonist. The comedian’s fast but targeted routine continued to entertain the audience throughout the performance, especially when he begun interacting with them by getting them up on their feet and teaching them to do the ‘Sex Ron’ dance to a hilarious quiz game show titled ‘Hopkins or Hitler?’ in which the audience have to guess if a collective of quotes came from the mouth of the vulgar Katie Hopkins or the despised tyrant of World War II. Taylor’s use of basic staging within the Lowry’s studio space was effective, bringing a sense of community to let people understand his struggle and what he is doing to fight the powers that be. 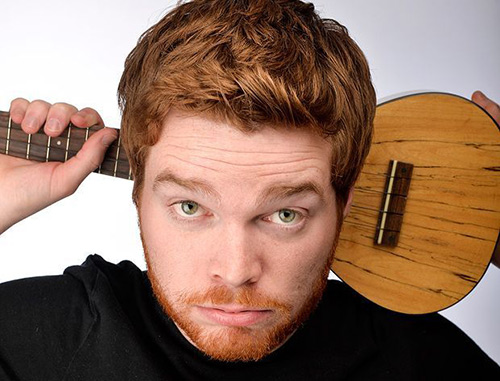 Taylor’s use of music within his performance is a secondary addition to his orange themed arsenal. Following in the same vein as Tim Minchin, his songs bring a flare of obscurity and dada with a gentle piano melody dedicated to his colour blind ex to the ukulele jingle of all the rude and quite creative names that school bullies have developed to assault both him and the ginger community. Though he sometimes relied on singing alternative lyrics to well-known songs, the multi-instrumental artist keeps the audience laughing and singing along with him, including a smart and effective ending finale song that I will not spoil.

Ginger is the new Black was an enjoyable event. James is entertaining presence whose bouncy and determined persona worked well for his performance as well as the interaction between himself and the audience, including sharing a small conversation with a fellow ginger brother named ‘Ginger’. Filled with music, quick humour and a sense of fun, James Wilson-Taylor’s one man mini revolution is an entertaining romp that will bring all together to take on the Laura’s of the world with a song and laugh.