The cast are all as outstandingly good as one another and their characterisation and chemistry makes it easy to get lost in the moving plot, much like the film on which it is based (first performed in 1993, a screen adaptation of the play was released in 1996 by Channel 4 Films, with a revised screenplay also by Harvey).

Being set in South East London it makes sense that former Eastenders Thomas Law (Peter Beale) plays Ste and Charlie Brooks (Janine Butcher in the soap) plays his love interest’s mother Sandra, with Sam Jackson as Jamie. This poignant tale of fear, acceptance and managing in the hard times of living on such an estate is given a sense of light-heartedness by their Mama Cass-adoring neighbour Leah (Vanessa Babirye) and Sandra’s boyfriend Tony (Gerard McCarthy).

Irony comes in parts, especially for fans of the film, and many lines are heard and easily interpreted as innuendos. This is down to the genius writing style of Harvey and the perfectly-placed pauses and direction from Nikolai Foster who has been responsible for the show on many of its reincarnations. Despite quoting in the programme that “one can’t rely on past successes and must banish any pre-conceived ideas of what the play is about”, he has done a sterling job of staying true to the iconic and compelling script and vision, loved and admired by so many, straight and gay alike.

Having enjoyed success across the world, including ‘local’ runs at Oldham Coliseum (2002), Royal Exchange (2011), Nottingham Playhouse (2002), Leicester Haymarket (2005) and various London theatres, as well as premieres in German, French, Dutch and Australia and America, it is no surprise that the audience was on their feet on opening night (Mon 13 Apr).

The power of this cast’s passion and drive is no more effective than in the sensitive scenes between Jamie and Ste or Jamie and Sandra, particularly when he is edged ‘out’ after attending The Gloucester.

This is certainly one to get to if you are able, in Manchester - until Saturday 18th April - or elsewhere on the tour that ends on 25th July. Next it returns to Nottingham Playhouse, before heading to Northampton, Leicester, Cardiff and Brighton. You may even be treated to understudies Rob Ellis and Natalie Law, but you will never be disappointed. 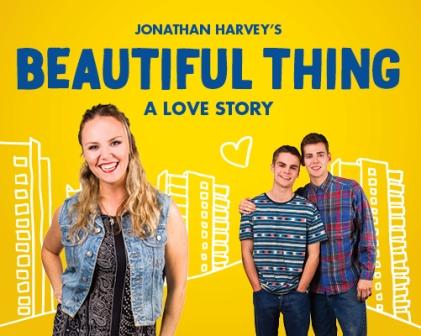