Hansel and Gretel is the second of Opera North’s three new production of fairytale operas to hit the Lowry Theatre in Salford.

It was a beautiful March evening at the Lowry with an auditorium full of people aged 40 and above with not a child in sight to watch the well known and beloved Hansel and Gretel fairytale by the Brother Grimm.

Hansel and Gretel was written by German Composer Engelbert Humperdinck (1854-1921).

Humperdinck was the protégé of Richard Wagner and assisted him in his Premier preparations of Hansel and Gretel which first performed in December 1893 conducted by Richard Strauss. 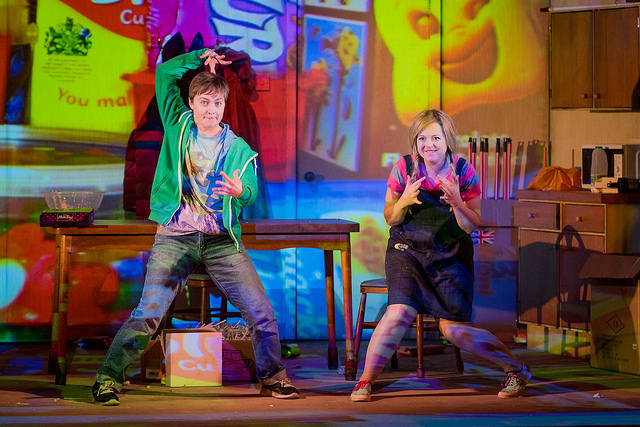 The classic story tells the tale of brother and sister Hansel and Gretel in a poverty stricken family that are send away into the woods by their wicked stepmother to fend for themselves, so that she and her husband do not start to death, because the kids eat too much.

Having seen several of the Opera North performances including the award winning Peter Grimes I was intrigued to see Edward Dick’s modern interpretation of Hansel and Gretel. The initial overture lasted 10 minutes leaving the audience and essence of was the curtain ever going to go up.

The set is based in a 21st century tower block of flats that’s rundown and drab with a clear absence of food for the youngsters displayed by an empty fridge. Cadle cleverly uses the set as a base for creating fantastic effects with the use of live video cameras and projection on the back wall, the result was outstanding and striking with huge close-ups of the performer as they sang exquisitely, The handheld cameras and live video set against this modern technology added to the superb condition accomplishment of Edward Dick’s direction creating the ambience of the magical world of Hansel and Gretel.

The opera was displayed within three acts firstly the house, the forest and finally the witches house. Hansel and Gretel was supposed to be thin and malnutritioned but were anything but thin and fragile as they were played by two very healthy ladies. Hansel the brother of Gretel was played by a female which made it hard to believe that the character was a masculine male.

The first act portrayed an air of poverty, abusive parents, alcoholism and domestic violence. It was hard to distinguish fantasy from reality, was it really a dream of two gluttonous children or a drug induced psychosis of two teenagers.  Beyond ‘ The magic dance is our secret play’ and ‘gristle witches’ The scene is set for two children to face a night alone in the forest. Armed with a bag of sweets as berries they encounter the Sandman with a large ‘I Love You’ Teddy who announces she wants to cuddle, clutch and touch them leading the youngsters into an exotic dream of fairgrounds, amusement arcades, seaside fun and the infamous chips with ketchup. Sandman created the idyllic grandma figure for the children whilst lost in the forest which then closed into the interval.

The witches house started with another lengthy opening played beautifully by the Opera North’s orchestra.

The end was true to the original fairytale where the witch is tricked by the children and pushed into the hot oven set alight for Hensel.

The opera ended in the projection of the future with Hansel and Gretel’s husband and wife and children at Christmas celebrating life.

Train crash or a success by Edward Dick?  the verdict is still out - I’ll leave you to make your own mind up.

The singing and musical direction was faultless but I’m personally not convinced on the modern interpretation which was a mix of ‘Blair Witch’ and ‘The Seven Deadly Sins’.