The third and final piece of Opera North's quirky fairytale offerings was put into the jigsaw this evening. First we had a re-imagined modern version of Cinderella, followed by Humperdinck's Hansel And Gretel, but the piece de resistance must surely be Rimsky-Korsakov's unknown but beautiful scoring for his opera The Snow Maiden, the composer's own favourite work.

Why something so hauntingly beautiful, lyric and masterly is hardly ever performed I have no idea, but what a treasure this score really is. With his own libretto, now translated into English by Alasdair Middleton, we are given a wonderful insight into folklore and conditions of the Russia of the 19th century.

There was just one huge problem with this; and this, sadly was down to the choices made by director John Fulljames. In order to try and make this piece more relevant and modern, he had updated the setting to 2017, and the action took place within a clothes factory. The women all on sewing machines as clothes were continuously passed above on a conveyor system. 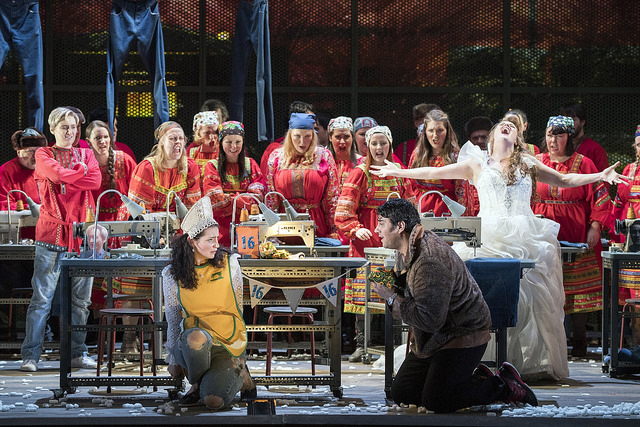 One of the office workers was a dreamer, and as she dreams her story, she becomes the protagonist of this story and her colleagues and even the mannequins become part of her dream. It was an interesting idea, but one which I feel didn't work quite as well perhaps as it ought to have done. I found it very hard to believe in a Snow Maiden dressed in ripped jeans and a workers' smock.

The other directorial choice which didn't work as well as it could or should have was the almost continual front projections. For a good majority of the opera, a screen had been flown in, in front of the action and projections - colourful flowers, snowflakes, branches, birds, and goodness knows what else - were continually being 'drawn' upon this 'canvas'. Some were so obtrusive that I wondered whether, if I had been seated in the upper circle I would have been able to see any of the action at all for all the swirls and designs. They were, for the most part, unnecessary and quite distracting.

In fact, the whole show would have benefited technically from the 'less is more' principal. Let the actors tell the story - that's what they are there for and what they do best. The set, lighting and sfx should be there to compliment the narrative, not to overpower and make it.

However, the standard of singing, and even more surprisingly for opera, the standard of acting this evening, was second to none. Opera North had found some of the best voices around, and my, oh my, what an aural treat it was! Yvonne Howard as Spring Beauty, Aoife Miskelly as The Snow Maiden, Phillip Rhodes as Mizgir, Elin Pritchard as Kupava, and Heather Lowe as Lel, lead the all-star opera cast, with two fine cameo performances by James Creswell playing Father Frost, and Bonaventura Bottone as the Tsar.

With a huge orchestra sounding absolutely wonderful under the direction of Leo McFall, and the chorus of Opera North, this was truly an experience that I am very glad I did not miss. It was though, an opera of mixed messages; neither one thing nor the other; neither true to the original in time and place, nor true to the modern age either. It sat somewhat uncomfortably in between.