This evening was split into two separate but interlinked plays, both of which were directed and choreographed by Arthur Pita.

The first of which was Stepmother, set in a surreal and darkly menacing world based on Grimms' fairy tales, the opening scene being the funeral of Snow White, complete with glass coffin and mantilla bedecked mourners. This play guided us through several grotesquely terrifying stories, including Cinderella, Rapunzel, Hansel and Gretel to name a few, where the typically widowed stepmother was responsible for her young charges inevitable and often tortured demise. The formal classical ceremonial music, hovering mist and simple black box style of this play all adding to the sinister atmosphere.

The 'Stepmothers', appeared almost indistinguishable from each other, in their ominous, anonymous garb with Corey Claire Arnnand a perfect Ingénue; petite and childlike in her portrayal of each of the stepmothers' victims.

The ending of the first act, which presented the perpetrator of all of this misery as Christ like and powerful without a shred of guilt for the pain they had caused, with a rebirth and ultimate comeuppance by being subjected to the same kind of death as experienced by their stepdaughters. 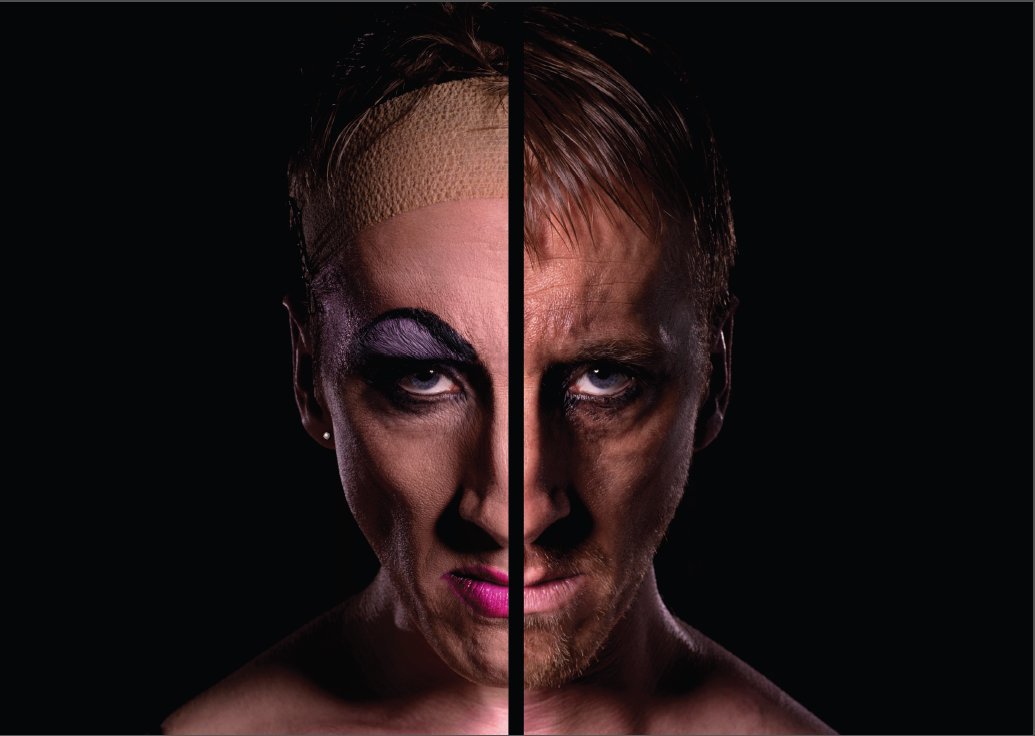 Initially, I wasn't sure what I thought of this first half, as one audience member commented ‘That was a bit weird!’. However....

Stepfather, blew me away, to a backing track by the Violent Femmes, this play was black comedy at its best. Set in contemporary Southern States of America, we follow the seemingly quick Vegas wedding between Eugene and his new wife Priscilla, who quickly conjured up a gaggle of three daughters as a ready-made family for the unsuspecting groom.

The representation of Eugene (Stepfather) and dead Eugene, worked well with everything unravelling when Eugene’s dead alter ego appeared on the scene. The subsequent story of his incestuous relationship with Mary Lou, one of his step daughters, her murder and his suicide was all very cleverly told

Finally, the redemption after death suggested a relationship of father and child, rather than that of lovers.

On reflection, these two plays worked wonderfully well together, providing a juxtaposition of horror and comedy; the stereotypes and myths around the roles of men and women within society and how they are perceived within these roles. Stepmother, presented a group of widowed women, all of whom were jealous of their young, beautiful stepdaughters, coveting them, taking an almost sensuous pleasure in their deaths. Whilst Stepfather played on the young girls needs for male approval; presenting Mary Lou, as a 'temptress' and an implied sexual tension that seemed inevitable for a man to feel for a female who was not his own child. The scene where Priscilla finds her husband with her daughter and how she then allows her other daughters to physically attack Mary Lou revisiting scenes from Stepmother, highlighting the jealousy that she felt at being usurped by a younger women and ignoring all of her maternal instinct to protect her child from this man. The end scene left us with yet another widow surrounded by beautiful daughters, again a clever nod to Stepmother.

The show was performed by Headspace Dance, all of the performers played their parts energetically and confidently, however special mention goes to Nadia Adame. In Stepmother she entered the stage using a crutch, which was a perfect prop for the role she was playing. However, it was only in Stepfather when Nadia entered as the sexy, sassy Priscilla, that I realised that the crutch wasn't a prop! Nadia played the role to perfection and her floor work was exquisite. Hopefully we will see more of her and it will inspire other young disabled actors working within the industry. This company is certainly one to watch!