Maggie Fox and Sue Ryding, aka Lipservice Theatre, have returned to the Lowry with their take on Jane Austen's Pride and Prejudice, Mr Darcy Loses The Plot, and in this hysterically funny comedy, he certainly does.

A modern day writer is spinning her story about Mr Darcy leaving Pride and Prejudice because he is bored of waiting around to be written back into the plot. He ends up as principal characters in both Daphne Du Maurier's Rebecca and Elizabeth Gaskell's Mary Barton. Mr Wickham also provides a role model for a character in Beatrix Potter's The Adventures of Jemima Puddleduck. Three authors also appear in silhouette form. As Mr Darcy moves between novels he relishes some characters and runs from others, especially when being hunted for murder. But he has to return to his own plot periodically when he is required in the storyline. 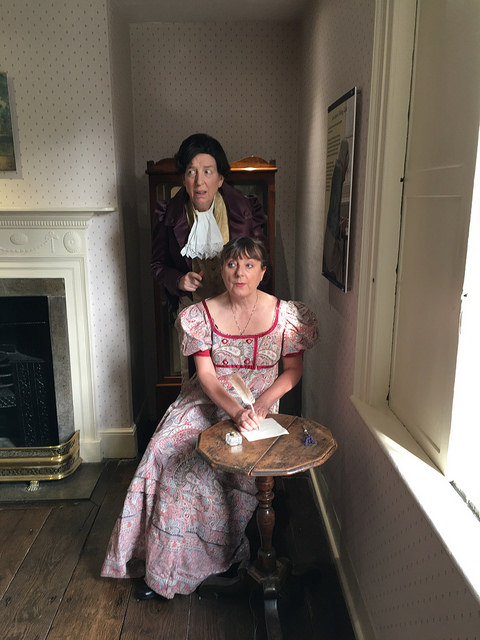 As always in Lipservice productions, the original plots are used as a thinnest of the basis for the play and yet the characters remain instantly recognizable. This is entirely due to the skill of Maggie Fox and Sue Ryding. Every character is played by the two of them with often just a wig or couple of items of clothing to show the difference. The costumes are a vital part of the whole as many are used to great comedy effect.

Occasional inserts are shown on video screens but the actor's interaction is spot on both in timing and humor. The majority of the set is made up of large quilted panels (made by quilting groups and a few individuals) which act as mobile screens to form walls, scene changes and sometimes props. The Bennett sisters in bed was especially well done. The aforementioned Mr Wickham also has a spectacular entry on his white horse.

Maggie Fox and Sue Ryding are undoubtedly some of the funniest comedy writers around in theatre. But the clever writing is enhanced by their natural brilliance at the ad lib while staying completely in whichever character they are in at that point. It is the little details in their shows which make them such complete performances. The shadow of Rebecca, the smoke from the mills, the burning of Mandalay, all make this show that bit richer and more humorous to watch.

If you've never seen a Lipservice Theatre show, you're missing out, and Mr Darcy Loses The Plot could be an ideal place to start.