Don’t Dribble on the Dragon - The Lowry, Salford

The Lowry Theatre’s Aldridge Studio hosted The People’s Theatre Company’s endearing show, Don’t Dribble on the Dragon. The performance is based on the book written by Steven Lee and includes magic designed by the late TV magician Paul Daniels.

On entering the studio with my little 5-year-old companion we were met with children’s party music booming over the PA system and a beautiful stage, set like a child’s bedroom with so many things to keep us occupied to look at before the show started. The oval screen, in the centre of the stage, was used throughout to project scenes that charmingly complimented the story. As the lights went down we heard the sound of the Happy Birthday song being sung off-stage.

What followed was a father telling a story to his daughter Natalie about when he and her uncle Jack were young. The daughter was fed up of dealing with her annoying younger brother Alfie who’s birthday it was that day. So, her dad, Tom, played by James Mitchell, tells the story of when he was 3 and a half years old, looking up to his older brother Jack aged 7, played by Steven Lee and how they had fallen out due to Tom’s unfortunate dribbling problem. This had earned Tom the name ‘Drool features’ and ‘Slobber Chops’. 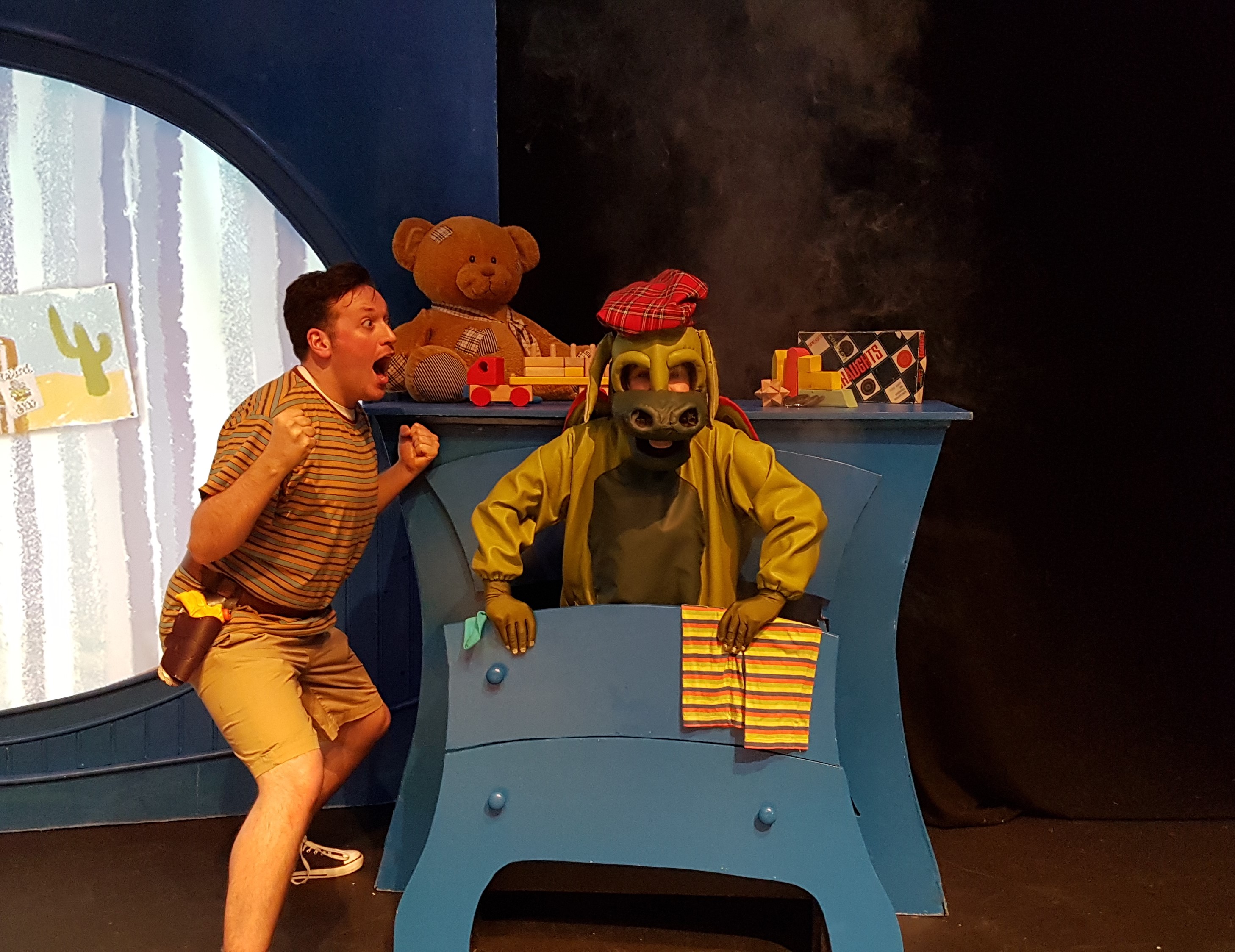 Natalie’s bedroom was once the bedroom of her dad and uncle in 1977 and this was seamlessly swapped with the switch of a duvet from present day and 1977 throughout story. Tom and Jack had a special friend, a Scottish dragon, played by Kate Powell, who had magical powers and she tries to mend their broken relationship when brotherly love switch to sibling irritation when Tom dribbling drove Jack to despair.

This was a warm, funny endearing tale of brotherly love combined with toddler troubles. Don’t Dribble on the Dragon was a truly magical family hour illustrating the importance of strong emotional ties in childhood and the significance of siblings even when they drive us crazy.

Don’t Dribble on the Dragon had all the elements that makes for exceptional children’s theatre – singing, dancing, magic tricks and audience participation with a smidgen of pantomime “he’s behind you”. The songs were simple but catchy and the words were absolutely perfect!

My 5 year old companion was thoroughly immersed in the story and squealed with delight every time Tom used his water pistol on the audience to represent that he was dribbling (high praise from a 5year old with tonsillitis who hadn’t done much smiling all week). The three performers were spectacularly talented and held the children’s attention extremely well considering that today’s audience was very young despite the show being advertised as not being recommended for under 2 years old.

As with all great children’s tales all turns out good at the end and of course Tom’s dribbling saves the day.

Following the performance an added bonus was that copies of the book were on sale in the foyer with the author himself, Steven Lee, signing copies. There was also an opportunity to have photos with Tom and the Dragon that the excited audience took full advantage of.

Overall, the story is light-hearted and truly engaging, dealing with the struggles of growing up with younger siblings, and I particularly liked the idea that wishes don’t come for free, but that one has to give up something in order for them to come true.

Don’t Dribble on the Dragon is well worth seeing if it comes to a theatre near you, and is one of the best pieces of children theatre I’ve seen in a long time. The cast was superb and the staging was magical and in the words of my little companion on summing the performance up “Wow mummy that was so much fun, can we go back and see that again?” (High praise from a poorly 5-year-old who an hour prior to the show just wanted to go back to bed).

To find out more about the show and the theatre company www.ptc.org.uk