Opera North open their season of ‘Little Greats’ – a series of short operas in double bills – with the oldest pairing of them all, ‘Cav and Pag.’ The challenge, therefore, for the company was to find a fresh way to present these two stalwarts of the operatic repertoire. These two innovative and dynamic productions certainly pass that test, and provided a terrific night’s entertainment to a packed house at the Lowry.

The two operas, linked by common themes of passion, betrayal and murder, emerged as beacons of the nineteenth century ‘verismo’ movement, in which operatic narratives deal with the lives of ordinary folk, rather than mythical beings or royalty. Leoncavallo’s Pagliacci is, of course, a tale of theatrical people, but here the line between reality and play-acting is further blurred by director Charles Edwards’s decision to set the scene in the company’s rehearsal room, rather than the usual village square. This adds an extra layer of artifice to the piece, as does the ingenious use of a curtain featuring a huge team photograph of the entire Opera North Company. In a further twist, baritone Richard Burkhard as Tonio delivers the prologue from in front of the curtain in English, before switching to the usual Italian for the rest of the performance, bar the famous final line. This neatly frames the action, and linguistically marks off the melodramatic action. 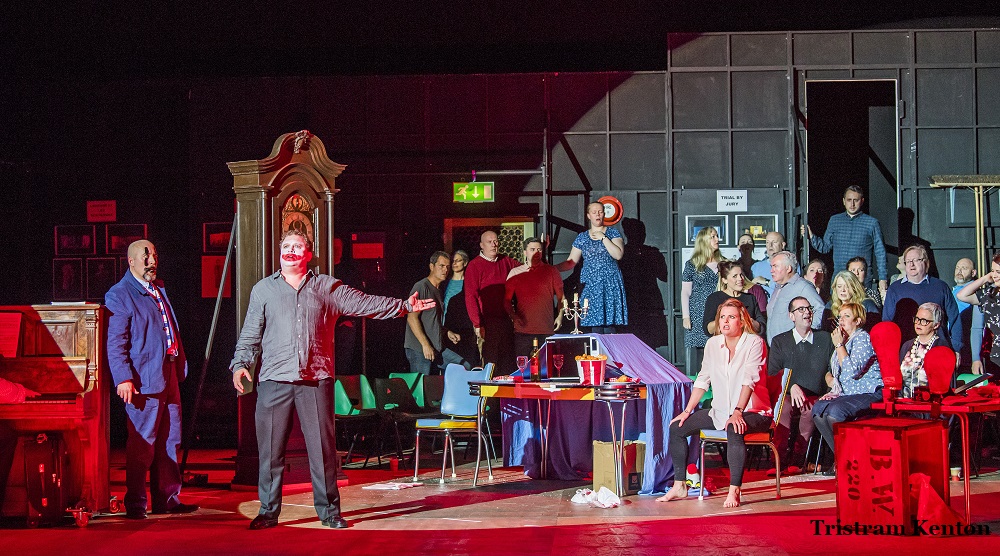 Burkhard, and the other principals, are in fine form here, singing with passion and clarity, whilst coping with a production style that is perhaps a little too tricksy. Charles Edwards, who designed the set and the lighting as well as directing, constantly plays with the opposition of art versus reality, even using a mini-version of his own set in the rehearsal room as Canio explains the play to his company. Tenor Peter Auty as Canio gives his character a menacing presence from the outset, and his appearance in the second part as Pagliacco, in sinister clown make-up expertly applied on stage by Tonio adds an extra frisson to ‘Vesti la giubba’, sung alone in front of the curtain. The star for me, however, was Elin Pritchard as Nedda. She lived this role, bringing passion and commitment to every line. Her vulnerability is all too apparent in ‘Qual fiamma avea nel guardo’ and her yearning for a new life with Silvio (the rather saturnine Phillip Rhodes) is heartbreakingly rendered.

Inevitably, the insanely jealous Canio, breaking out of his role, confronts his wife on stage, and in the climactic final moments, takes bloody revenge on her and her lover, leaving the devious Tonio to deliver, in English, the final line: “the performance is over.” The company wring every last drop of emotional energy from the text, and were rightly rewarded with a rapturous reception.

For Mascagni’s Cavalleria rusticana in the second half, director Karolina Sofulak has transposed the action from post-Risorgimento Sicily to nineteen seventies Poland. She makes quite a convincing case for the change in her programme note, mentioning the shared Catholicism and deprivation of both settings, but it still seems a gratuitous complication, when the mood of the piece is redolent of southern passion. Still, it does make for some startling theatrical flourishes, as Lucia’s village shop becomes ‘Sklep Lucyna’ and Alfio’s cart becomes a beat-up Polski Fiat. The drab set, again the work of Charles Edwards, is dominated by a huge plain wooden cross, which represents the church, and also the crushing weight of shame felt by the wronged Santuzza as she battles in vain to save her marriage to feckless husband Turridù. Jonathan Stoughton plays him with appropriate swagger, especially in the in the drinking song ‘Viva il vino spumeggiante’ though it’s vodka rather than Nero d’Avola that’s he’s swigging. 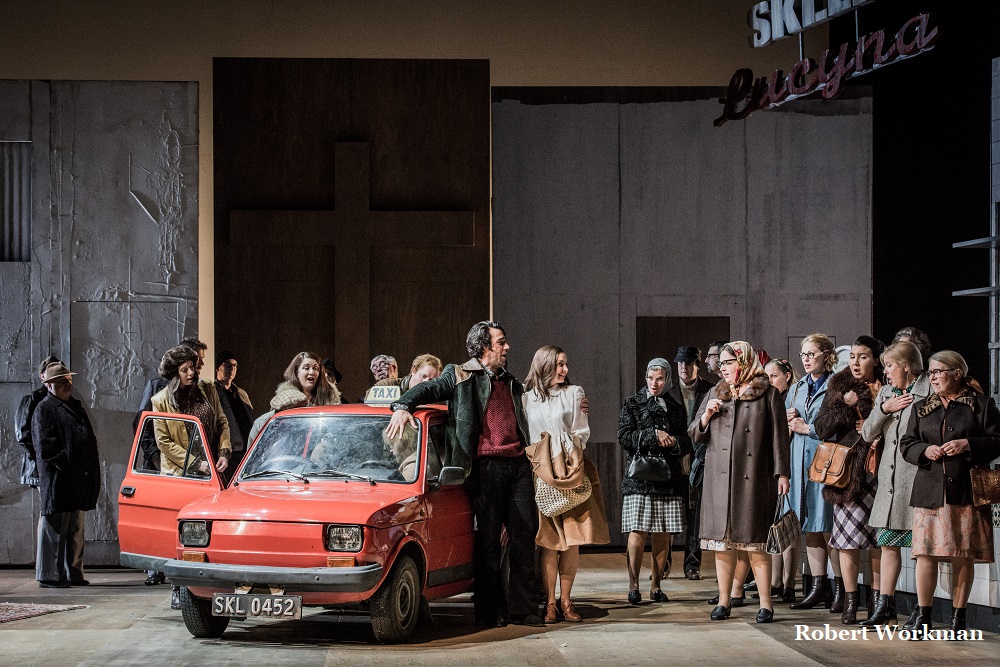 In the role of the cuckolded Alfio, Phillip Rhodes, having been on the receiving end of a death blow in the first half, puts Turridù out of his misery in this. He invests his character with an anguished passion that is the hallmark of this production. In that respect, soprano Giselle Allen’s Santuzza stands out. She flings herself at the cross as her despair at the loss of her husband to his previous lover Lola grows to crisis point. Finding no help from her mother-in-law Lucia, played with tight-lipped sourness by Rosalind Plowright, she reveals all to Alfio, initiating the final act of retribution. It seems much more like Elizabethan revenge tragedy than Soviet era melodrama, but in the end the transposition does not interfere with the impact made by a fine ensemble working in pleasing unison.

Opera North’s chorus are busy in both productions, populating the stage with the common people demanded by the ‘Verismo’ sensibilities of the composers. In Cavalleria rusticana particularly, they are in excellent voice, with ‘Regina Coeli Laetare’, the Easter Hymn, a notable highlight. Tobias Ringborg conducts with energy and sensitivity, maintaining a heightened sense of tension throughout both pieces. The whole evening was a testament to the vitality of Opera North’s mission to reinvigorate the genre for a new generation, here showing that even this hoary old pairing can still be staged in a startlingly original way.