The award-winning Vertigo Theatre are back at the King's Arms, and once more are pushing the boundaries of fringe theatre. Noir is their most complex production to date, and aims to recreate the feel of the Film Noir era of the forties and fifties.

Film Noir is generally acknowledged as starting with the Bogie classis The Maltese Falcon in 1941, and the genre reflects the general darkness of the war and post war years as opposed to the brighter films of the 1930s. Often featuring detectives or police officers, these characters often provided the narrative to a flashback storyline. 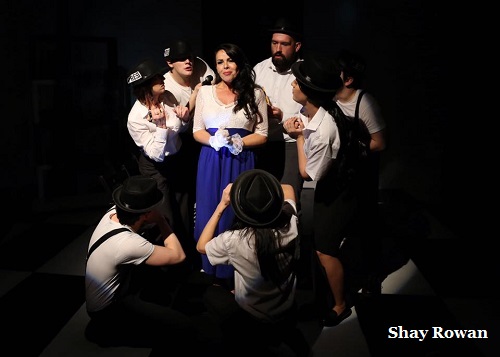 Writer/ Director Craig Hepworth has taken the ideas and style of Film Noir and created a classy thriller, incorporating the detective, the femme fatale and the young rebel. The story is told in flashbacks by Detective Sal Pelletier, as he recalls the events that led up to his involvement with the case. Veronica Smart is a beautiful 36 year old housewife, but in her sixteen years of marriage, all she has wanted is to get a career as a film star. In the end bored and lonely she takes a job in the local high school teaching Art. This brings her into contact with a group of sixteen year olds including Billy Flynn and Vivien Pierce. She takes these youngsters under her wing, but does she already have a sinister plan?

As always Vertigo have assembled a strong cast for this show. Bekka-Jane Milner plays a variety of roles all with great skill. Joe Slack and Benjamin Gray as Riff and Barry, Billy's friends, are also very strong, while Suzi Williamson as Vivien's devout Catholic mother is highly believable and Luke Richards gives a powerful performance as Billy's father.

Stuart Reeve is convincing as the experienced detective Sal Pelletier, and the staging of him sat to one side in a smoky haze is very effective. Anna Hickling as mousy Vivien Pierce is stunning, and her transformation during the show is a real scene stealer. Danny Clifford plays Veronica's cheating husband Cliff, and swings between swagger and remorse with great effect.

However the two stand out performances are Richard Allen as Billy Flynn and Emma Morgan as Veronica Smart. Both are regulars in Vertigo productions and Richard Allen shows in this role why he is one of the best young actors on the Manchester Fringe scene. Emma Morgan takes on her first lead role here and gives a real tour de force act. She encompasses the role completely making the character engage sympathy and give chills to the audience.

In the tiny stage area of the King's Arms Vertigo have skilfully created a while film noir world and the sound and visual FX work of Karl Burge is a huge part of creating this world we see.

Craig Hepworth is one of the most skilled writers and directors working in the fringe and Noir is another huge success for the company. This is a show that should not be missed.