Tonight saw the 4th incarnation of a Steve Helps play. This play started out life way back in 2014 under the title Dragged Up. The idea at the time was for Stevie to write, direct and produce or co-produce a play that would go through developments until the original play becomes everything it can be.

Rachel who is the star of the show if you can say so has a stand out star! Rachel is dramatically and energetically played by not one but three fantastic actresses in Brogen Campbell, Lauren Cotter and Jennifer Hayden.

The play starts with Nosie Rosie (Sophie Osborne) setting the scene in her own hapless manner. She is an old lady whose husband has died then as she chats the whole cast join her on stage. They go into our first song then exit the stage and we are introduced to Jane Maloney played by Kelly Freemantle. Jane clearly has mental health issues of some kind and is crying out for help, will she get it? 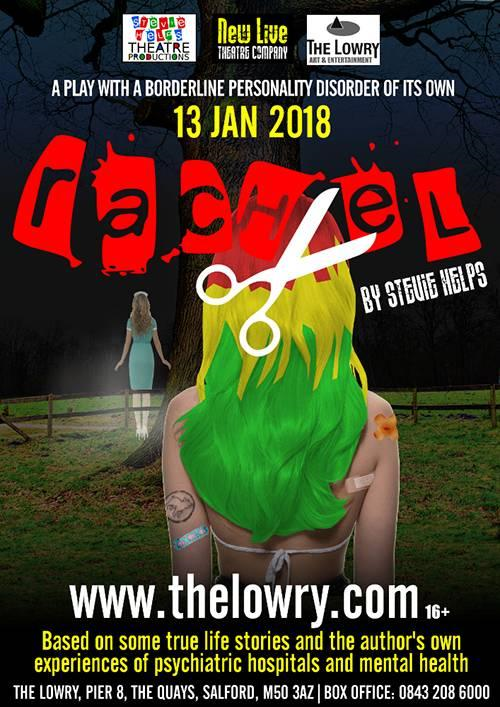 Rachel is in the pub having a dance and being a bit outrageous when Elliot Lloyd (played by the talented Paul Kenney) comes along and is the subject of Rachel’s attention. This outrages Stuart Maloney (played by the enigmatic Simon Bugg) Rachel’s angry aggressive father. Stuart takes Elliot outside and along come Andy and Sarah (dramatically played by Joe Walsh and Sophie Osborne in her 2nd role in the play) Andy is a friend of Stuarts and Sarah is his girlfriend they interrupt the argument between Elliot and Stuart. Sarah flirts with Stuart before Andy walks away. Next to interrupt the issue between Stuart and Elliot is Jessica (Diane Brown) who goes from a caring bystander who looks to help Elliot into a person who doesn’t want to get involved when she hears Stuarts description of Elliot.

Rachel appears then to save Elliot from Stuart and the story moves on. Or should I say the stories move on as this play although focused mainly on the life of Rachel takes us through the lives of the other characters.

Off go Elliot and Rachel for a picnic and this is where we are introduced to more people with issues in Brad (Luther Wells) and April (Marley Axon). Also to join is Roxanne (Coimbra De Oliveira who also plays Nurse Michelle). It becomes apparent at this time that all of the characters have some sort of issues. The other cast members that we have already been introduced to is Anna Prior who plays Detective Tina and Nurse Susan. Our final character is Waitress Julie (Linda Meacher) the café owner who loses her dog Pork Chop in the park.

The story plays out with a lot of swearing at times, possibly overly used but in the context of the story and it’s admission that it is over the top at times. I feel this is Stevie’s way of highlighting the lack of control that can affect people at times who have mental health issues. This may offend people but is a clever way to highlight this side of mental health issues.

The play is powerful, very thought provoking and is multifaceted. Stevie himself describes this play as having ADHA, Bi-Polar and Borderline Personality Disorder, and this is definitely true. It is a fantastically put together piece of work which I am sure can be developed even further. It is beautifully supported by the voice and music of Kat Rowling.

It produces a very strong political message at the end that is emotionally delivered by Nurse Susan (Anna Prior), you can truly hear the emotion in her voice.

The whole story is based around events and experiences that Stevie has had. The cast are wonderfully brought together and are a credit to the production. It may not be the type of show for anyone who has experienced mental health issues or abuse. But is well worth a watch if those issues are no longer still raw, and would be the ideal show for politicians who think that the NHS is not struggling to deal effectively with mental health. It shows that mental health is not an issue where one diagnosis fits all unlike a broken arm or a cut hand.

Based on the size of this production and its budget I would rate it as a 4 star, my only reservation preventing it from hitting a five star would be the amount of swearing as this may put off or offend some people.