The Winslow Boy - The Lowry, Salford

It is fair to say that Terence Rattigan is a playwright who has fallen out of fashion in theatrical circles over the last 50 years, with his earnest, delicate portrayals of love and manners seemingly out of step with the demands of a modern theatre audience.

It would appear that the Salford audience confirmed this assessment with a thin (and somewhat mature) crowd attending the opening night of Rattigan's best known work 'The Winslow Boy'. However, scratch the surface and the story of an Edwardian public school cadet expelled for the theft of a five shilling postal order and some interesting themes emerge; the role of government in the everyday lives of people, women in the political process and loyalty in the face of prejudice.

The central relationship in the piece is between the young cadet Ronnie Winslow (a debut for Misha Butler) and his ostensibly fearsome father Arthur (Aden Gillett), who both vigorously protest Ronnie's innocence and pursue this claim through the courts, culminating in their case becoming a 'cause celebre' and being debated in the House of Commons. 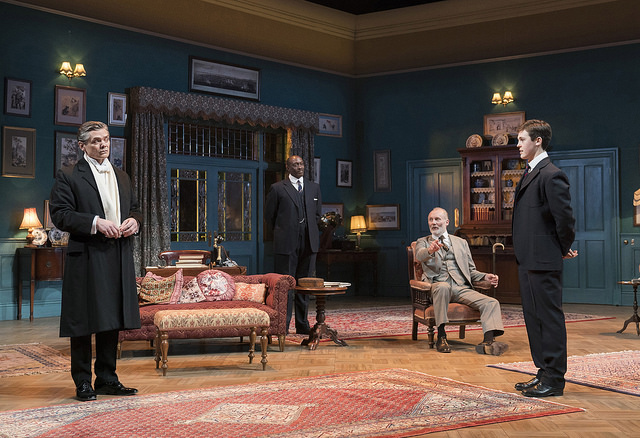 It is the touching faith that the father places in the innocence of his son, and the way in which his exterior harshness is gradually peeled away to reveal the tenderness he feels for him, that gives this relationship emotional depth. In one touching and revealing moment, he pulls a blanket over the sleeping boy and gently removes the hair from his face; Gillett infuses this moment with real tenderness.

The story builds to a climax at the end of the first half, with the fearsome Barrister and politician Sir Robert Morton (Timothy Watson) cross examining the boy to establish his innocence with both Watson and Butler giving this scene real urgency and clarity, the audience are sent to their interval drinks with expectation of a tumultuous court battle ahead and the cry of 'Let Right Be Done' ringing in their ears. However, the second half singularly fails to deliver this expectation, with both the court scene and subsequent parliamentary debate being relayed to the audience through reported speech of the Violet the maid (Soo Drouet), and so the final fate of Ronnie lacks the direct punch that it should provide. The decision by Rattigan to structure the piece in this way was obviously deliberate, but will leave a modern audience used to more explicit exposition, unsatisfied.

The roles of both the daughter Catherine Winslow (Dorothea Myer-Bennett) and her mother Grace (Tessa Peake-Jones), give the opportunity to explore the place that gender had in Edwardian society and it was particularly pleasing to see that the director Rachel Kavanaugh had chosen to highlight this, given that 2018 marks the centenary of Women's suffrage in Britain. Myer-Bennett gives Catherine a feisty quality and her modernity is juxtaposed against her fussy and wholly unworldly parent, she is serious and political where her brother is flippant and a dilettante. The changing position of women is supported further with the character of Miss Barnes (Sarah Lambie), a reporter who is wholly modern in her desire to trivialise the story and misrepresent the Winslow case. Catherine's final argument with Sir Robert beautifully illustrates the patronising mores of the male upper class and she is left alone on stage at the end, bathed in light and contemplating a very different future than the one mapped at the beginning.

The performance is staged by Michael Taylor wholly in an Edwardian drawing room which becomes progressively shabbier throughout, reflecting the detrimental effect that the case is having on the family circumstances. As pictures and furniture disappear from the walls and set, mirroring the failing health of Arthur and his diminishing place in society, the walls become more transparent, and the resolution finds the family are happier more open and honest.

The play was written in 1946 and is set in 1911 and one cannot help compare it to another great English work, written immediately after WWII and set in Edwardian England, An Inspector Calls by J B Priestley. Both these plays are a poignant evocation of a world about to change with the advent of the Great War and both offer hope for the future and faith in democracy and natural justice. From the perspective of 2018, these ideals can seem simplistic and even naive, but occasionally it does a cynical heart good to be reminded that love is paramount and 'Right can be Done'.