The term ‘Fake News’ immediately conjured up thoughts of the current situation in the worlds media today, alongside imagery of a certain American President who currently resides in the White House. However, this production was so much more and made me realise that although ‘Fake News’ is a global buzz word of today, in reality it has actually been around for decades.

The latest Vertigo production, ‘Fake News’ is set in the late 80’s in New York, where the world’s media and its adoring public were almost obsessed with seeking out only the headlines that grabbed attention, whether or not they were entirely factually correct became less important. Stories had a grain of truth on occasion but were twisted, changed, elaborated and over magnified with the one aim of making it so big that the stories would not only dominate the news but would also perhaps distract from the truth or what was really going on in the world. This was wonderfully demonstrated in the play when the story of the Berlin wall coming down was drowned by the fact that there was a Serial Killer on the loose. It was the Serial Killer story that made the headlines- ‘in the public interest’ of course. 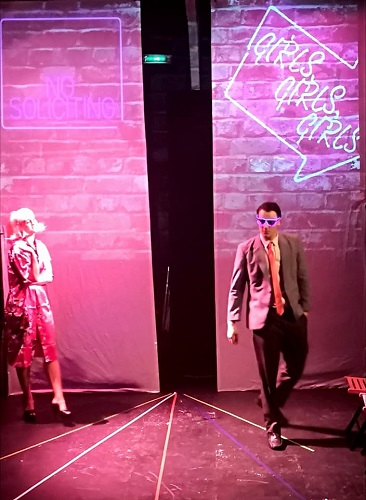 The story is based around the crazy world of Benjamin Davenport II played by Richard Allen. Allen portrays Ben as a crazed, fame hungry psychopath who wants to follow in his Father’s footsteps as a famous journalist. His only desire is to create a headline and the more successful he is at creating stories that have little or no bearing on truth, the more he becomes desperate for further success and fame. He eventually will do anything for a headline - even kill.

Allen who has many theatre credits to his name, was simply excellent, totally captivating at all times on stage. His deranged psychopathic character was intense and alarming especially when he stopped mid scene to express to the audience his actual thoughts. This was mixed with an incredible amount of immaturity that ensured the audience rarely took their eyes off him. Sitting on the front row was particularly intense as he connected directly at times, through his neon pink rimmed glasses.

All actors were phenomenal but a special mention must go to Tricia Sammy Rose who played the receptionist at the ‘New York New York Chronicle’ where Ben worked. She also played a marvellous role in her representation of the public. She displayed an individual whose genuine interest in following the elections at the time in New York was taken over by the more sensationalised stories. She had wonderful comedic timing, and portrayed a completely over the top, fitness obsessed New Yorker who hilariously died her hair blond when it was pointed out to her that the Serial killer on the loose only killed brunettes.

Costume, lighting and the entire stage setting, right down to a Rubik cube on the desk, portrayed the 1980s to perfection. The 1980’s music was spot on and the neon colours, strobe lighting and smoke was completely over the top – appropriately over the top I might add in a true 1980’s fashion. Intended as a distraction, just like some of the news stories, it all added to the sheer quality and wonderful production of this play.

Craig Hepworth’s articulate script is written with incredible observation and humour as well as managing to make the audience perhaps reflect on how they interpret news stories and the media. His directing of the characters was thoughtful and perhaps for me the most poignant game changer in the production was when Ben’s loyal partner ‘Brenda played by the fabulous Anna Hickling showed him their baby scan picture. This was an interesting change in direction in the story for me as this was perhaps the first time Ben had experienced truth in terms of a story- and the realisation that his baby boy was in fact a real story. He did not know how to deal with a touching reminder of reality such as this.

Fake News is a thrilling story and its wonderful writer, director and producer Craig Hepworth asks us to just consider news and the media for what it is. Fake News managed to do this and much more, highlighting that the reader is as hungry for a headline just as much as the creator of the headline itself. However, Hepworth is one guy who entirely deserves the accolades in terms of headlines for this wonderful production. This is fringe theatre at its best and furthermore there is absolutely no fake news anywhere near the utter quality of this production.

Fake News continues at the King’s Arms, Salford until the 28th April http://www.kingsarmssalford.com/mc-events/fake-news/