I wasn’t sure whether it was actually essential to be a ‘Grumpy old woman’ to watch this show or not. However within 10 minutes or so I realised that I potentially fitted the bill to be a member the Grumpy club. This is a show teeming with accurate, fine-tuned observation about things that are basically just not right about the world. A show full of issues that make our blood boil and cause a fit of rage. However, it’s fair to say that perhaps these issues seem more heightened if you are a woman of a certain age, as most issues in the show reflect challenges in the modern age today.

The stage is bright and enticing. The scene is set on holiday with bunting, a bar and inflatable chair and deckchairs. This is because the three middle-aged grumpy women (Jenny Éclair, Dillie Keane and Lizzie Roper) have decided that it was time to retire as they have saved the world for long enough and it’s now time to hang up their super hero capes and relax. Unfortunately for them it transpires that their grumpiness and special powers are still sadly required to save the world for one last time. 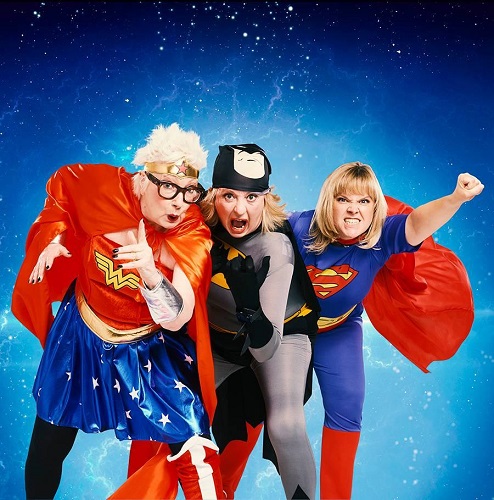 Perhaps the most well-known of the grumps is Jenny Eclair. Eclair is wonderfully brash, bold and swears like a trouper- and it was entirely appropriate, for her rage could be felt through her rants on subjects such as ‘Hipsters’, Spanx undergarments (‘like putting on a bicycle inner tube’), and her expression of the perfect exercise: ‘Pilates’- (because you can lie down at the back near a radiator as the exercises are so small that no one knows if you are doing them or not).

Olivier Award winning actor, singer and comedienne Dillie Keane (from Fascinating Aida fame that still makes me hum ‘Cheap Flights’) was most articulate, and for me, the funniest of the three grumps. Her demonstration of the annoying ‘Round Robin’ Christmas letter received every year was hilarious and incredibly accurate. Her description of the annoying ‘man spreading’ in a seat – ‘legs ajar’, was well observed especially when she compared it to woman spreading, ‘bag for life on one chair, handbag on the other and a bag of shopping between the legs’. Keane was constantly engaging with the audience right down to her struggle to actually get herself up from a chair and her rather deep, well-spoken voice was perfect for this role.

Comedian Lizzie Roper (from Hollyoaks and Boy Meets Girl fame) was full of expression and although perhaps over egging issues at times she was entertaining and certainly added a different dimension to the grumpy trio.

The audience were mainly ‘middle aged- ish’ women but there was a good old smattering of men too and I would say that it would absolutely be suitable for men- certainly if you are a male who is happy to let the grumps have a little moan about their other halves.

As Eclair exclaims, ‘Being angry is one of life’s pleasures,’ so if you are middle aged with a penchant for grumpiness, rage and indignation about aspects of the world today then this is the show for you. My guest and I left the Theatre perhaps realising that were indeed members of this very club.