The Lowry Theatre and Gallery is celebrating its 18th birthday this year and during this time the ‘Ship Canal Guggenheim' has flourished and developed into an integral part of the northern arts scene. To commemorate this landmark birthday, the theatre has curated ‘Week 53 - A Festival for the Compulsively Curious', showcasing new and challenging work from around the world. The celebrations opened last night with 'Hikikomori - The Shelter', a work by the Haut et Court Collective from Lyon, which illustrates the festival theme of 'Coming of Age' in a fractured technology based 21st Century.

Hikikomori is a Japanese term describing the acute social withdrawal of adolescents and young adults from social life and society at large, they will often retire into their bedroom and refuse to interact with anyone. Like myself, some of the audience last night were parents of teenagers and a frisson of recognition of this type of behaviour went around the theatre. 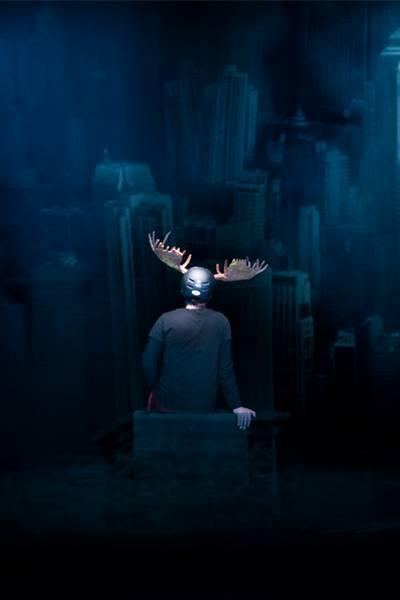 The premise was simply drawn with the characters being restricted to Nils (Philippe Chareyon) and his parents (Vincent Hermano and Marion Talotti), but we were invited to follow the inner monologue of only ONE of the characters, through headphones given to the audience prior to the show. The selection of the character you followed was randomly assigned and therefore allowed you one perspective on the unfolding story on the stage, each interpretation being wildly different according to which character you were allotted.

As a theatrical conceit this was brilliantly executed, I was drawn into the story from the perspective of Nils and a tale of bullying and social isolation followed; an inability to talk properly to his parents pushing him into a virtual world where he lived in his own 'forest', increasingly identifying as his animal totem spirit . I was accompanied to this production by my 17 year old daughter, and she was assigned the character of the father, looking at the piece through the eyes of a confused and angry man who was desperate to teach his son the life lessons his father had handed down to him, but was stymied by the lack of ability to communicate effectively in the modern digital world. Given the choice, we would undoubtedly have chosen the others perspective, but in retrospect, seeing the behaviour from the others viewpoint was extremely instructive. It was illustrative of how drawn in by the story we were, that both of us looked, without success, for someone who watched the show through the eyes of the mother!

The spare nature of the stage performance contrasted beautifully against the use of technology throughout, using digital imagery to create immensely lifelike representations of the totem animals that each character was represented by. Animal spirits resonate throughout world mythology and literature from Norse and American through to Rowling and Pullman and they were intelligently illustrative of character here. The Director Joris Mathieu meshed these scenes with the live action in a visually stunning way and only afterwards when we discovered the missing parts of the story could I fully appreciate how cleverly this was manipulated.

The deliberate ambiguity with which the show concluded (again, according to perspective) was indicative of the central message that we never know the whole story in life, and our understanding is based on our own experience and partial knowledge. As Mathieu concludes 'There are as many ways to understand our existence as there are ways to exist.'

The purpose of Week 53 is to challenge patrons of the Lowry to 'Stay Curious' and explore exciting new developments in theatre and live performance. Judging by the excited chatter and post show discussion of the themes and perspectives, with Hikikomori they have succeeded beyond reasonable expectation.