The Exploded Circus - The Lowry, Salford

We entered the Big Top tonight at the Lowry for this performance of Exploded Circus, performed by Mimbre Productions. Mimbre productions is a female-led company, directed by Lina Johansson. Lina founded Mimbre along with Silvia Fratelli and Emma Norin back in 1999. Production Designer Loren Elstein won the William Fletcher Foundation Grant in 2013. Music is provided by Quinta who is a London based experimental music maker and multi-instrumentalist. Lighting is from Amy Mae who is also London based.

The show was delayed as the performers needed some further set-up time and due to a concert nearby consideration was given to audience members who may be struggling to park.

The talented performers are Alice Allart, Farrell Cox, Coral Dawson, Arielle Lauzon, Lynn Scott and Rebecca Rennison. The first of the performers we see is Farrell as she enters the Circus which has clearly exploded. There are props and clothes everywhere, suspended from the ceiling. 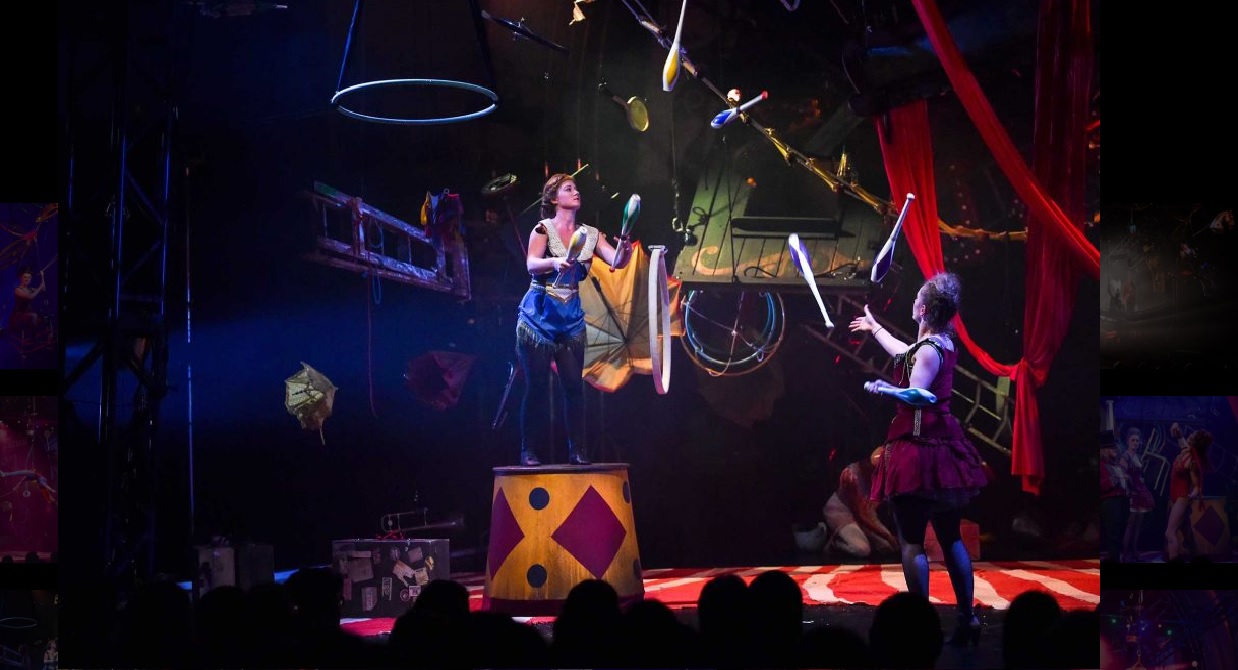 We see lots of extremely impressive upper body strength and gymnastic ability, from the ladies. There is aerial ability in abundance with the scary but also exquisite fluidity on silks. The music and lighting complement the story wonderfully. On occasion there is so much going on to prepare for the next skills that it detracts from the talents of the performer who is performing.

Trick cyclist Alice Allart enthrals the audience with some clever and tricky skills. Especially as she is joined on the bike by other performers as they all ride round the stage. There is some fabulous juggling from the very talented Lynn Scott, watch out for her behind the back juggling.

Arielle is so flexible as she leaps through hoops balanced on hoops. She is also amazing on the slack rope, which looks really special with light bulbs along the length of the rope. She works in tandem with Alice on the slack ropes.

Farrell has us spellbound with her talents as an aerialist early in the show, she also acts as a mini cheerleader ensuring the audience get involved.

Rebecca and Coral thrill us with their immense talent in Silks and Corde lisse respectively, both showing immense upper body strength and dare devil moves on their chosen equipment.

I took along my 11-year-old son to the show and he was impressed by the talents of the ladies but was often distracted by the other things going on as the show developed.

The show lasted for around 75 minutes without an interval so make sure a visit to the toilet is made before entering the Big Top or you may miss the silky skills of these wonderfully talented ladies.

Overall, I would rate this show as a 4 star show but would say that if you intend coming along you ensure you arrive on time or better still slightly early as people entering late not only distract the other audience members but also the performers.

There is no programme for this show and audience members who want to know more can take a trip to www.theexplodedcircus.co.uk to find out more about the show and performers.