Tonight I watched the one act play Citadel at The Kings Arms in Salford. The stage was set as William’s flat, inviting the audience into his world and his experiences. It contained a sofa, and coat rack, and specially William’s chair.

William, played by Andrew Bentley, suffers from PTSD from serving in Afghanistan. The play opens with physical movement which recurs in certain parts of the play, perhaps showing what was happening in William’s mind. The music and change of lights at these specific points was very effective and noticeable, giving an eerie atmosphere to the story and experience Will was having. 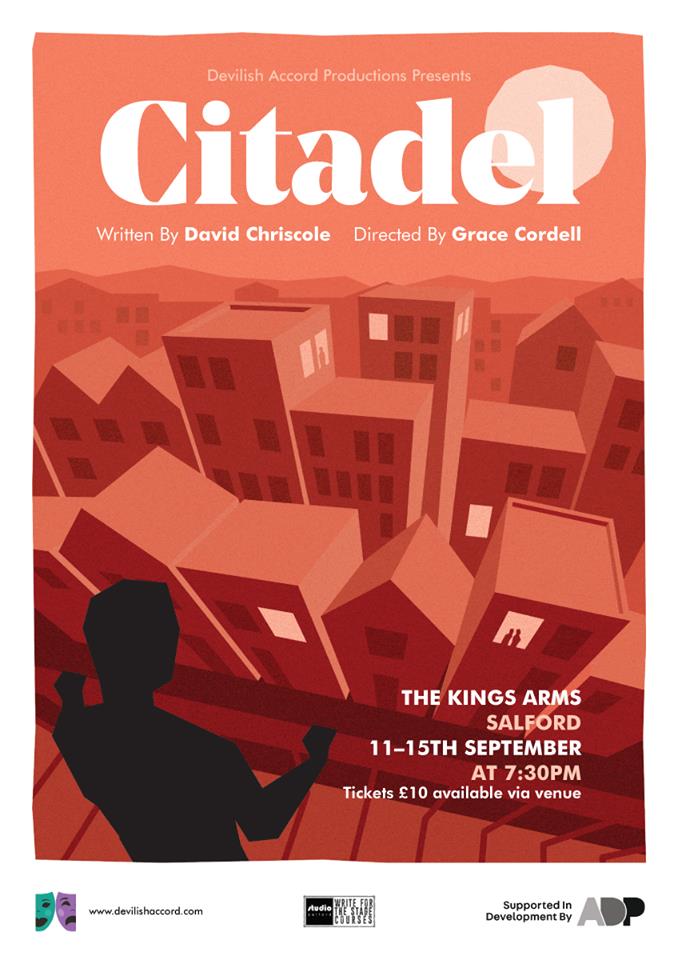 Will’s character is clearly haunted by his past. This was shown very effectively by heavy breathing, and shouting in his sleep, and declining the invitation of going out when invited by Amanda, played by Beth Hunter, and Justin, played Corin Silva. All three characters were extremely convincing and realistic, through their chatty, quick witted, and casual dialogue between each other.

An argument between William and Justin leads Justin to push William, for him to have a flashback to Afghanistan and repeat the word ‘death,’ many times. This was effective as it showed that Will had been triggered. Justin does not know about Will’s mental state, however Amanda does as she is studying for her doctorate in psychology. Justin is unkind after finding out and calls Will a ‘mental case.’ This showed the contrast between Justin and the understanding Amanda. Will kicks Justin out of his flat, as he is the landlord, and explains the story of Afghanistan to Amanda. This was done in a sensitive way, and later we see Justin reappear apologising for what he said to Will. He has educated himself on what Will has been through, and very realistically seems sorry and shocked about what he said.

All of the characters in the play focussed on sensitive issues very well, emphasising the importance of mental health and different reactions it can often have in society. It was also impressive as there were only three characters to tell this story.